Pannie Kianzad's Path Unfolding Exactly How She Planned It
By Thomas Gerbasi • Nov. 30, 2018

Looks are deceiving. Take Pannie Kianzad for example. Behind the smile and the engaging personality lies a young lady who has suffered through more than most to make it to tonight’s Ultimate Fighter 28 final against Macy Chiasson.

Yet as she tells her story, it’s not with a “woe is me” attitude. It’s more defiance, a way to throw some heat back at anyone who has doubted her since she turned pro in 2012. In fact, if you’re going into battle, the 26-year-old wouldn’t be a bad person to have next to you, because she refuses to back down.

So just ask her why, after all the ups and downs that come with a prizefighting career, from big wins to crushing losses, from feeling invincible to being barely able to walk, she continues to do this and chase her goals in the Octagon.

“Honestly, a lot of it is because I had so many people telling me to not do it, that I can’t do it,” said Kianzad, a native of Iran who now makes her home in Sweden. “It’s that. I heard so many times that I should quit. I had family members telling me that after I got my first professional loss that I’m not made for this. I was so pissed that it made me feel like f**k you, f**k you and f**k you. I don’t care that we’re family, I don’t care that we’re blood. It doesn’t matter.”

She chuckles about it now, because if there are any doubters, they’ll be impossible to hear over the roar of the crowd when Kianzad fights for a UFC contract tonight. But at her low point, it was hard to realistically believe that she was going to ever get to that point. 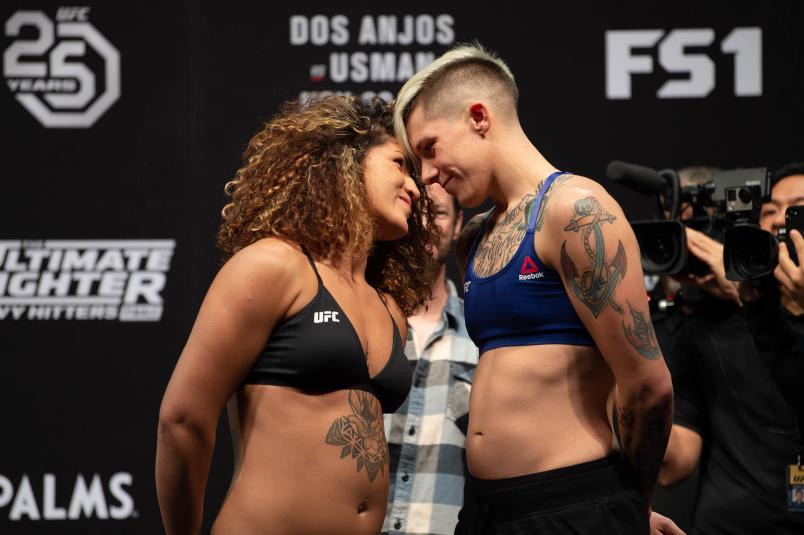 But first she had to get back on her feet, and after racing out to an 8-0 record that included wins over Lina Lansberg, Milana Dudieva and Jessica-Rose Clark, her body started to fight back.

“Before the (Tonya) Evinger fight, I got tons of injuries and it all got worse,” said Kianzad, who was stopped by Evinger in two rounds in September 2015. “I had no feeling in my left leg or my back and I went on a long rehab (after the fight). Then when I finally came back, someone did a scissor takedown on me and blew my knee out.”

That sequence of events prompted her to leave her team and join up with the Arte Suave team in Copenhagen. And while she finally returned in January 2017, she wasn’t herself in a loss to Raquel Pa'aluhi.

“It’s really depressing if you think about it,” she said. “I was finally physically ready, then you’re not ready mentally, and that’s when I lost to Pa’aluhi. She was so much better than me that day because I wasn’t there.”

A hard-fought decision loss to Sarah Kaufman followed a year later, but Kianzad had no qualms about the verdict or the fight because she finally felt like herself again.

Then The Ultimate Fighter became a possibility, but Kianzad didn’t know if a three-fight losing streak would be a deal breaker.

“I lost all those fights back to back,” she said. “If people look at my record, they say, ‘Oh, she’s got three losses in a row, she sucks.’ And I think, well, you’re stupid because I just lost to three really good people. (Laughs) I didn’t lose on a little local show against a nobody. And I didn’t get knocked out. I went three rounds with Kaufman and I thought I did pretty good, so I love that fight. And I thought to myself, I’m going to try out for TUF, but I need to get some wins.”

So she went out and beat Bianca Daimoni in May, picking up a Performance of the Night bonus in the process.

TUF producer Gary DeFranco texted her about the tryouts. Kianzad signed up, did well, then added another win to her record in June by beating Kerry Hughes. A message followed that she made it onto the show, but five days before filming began, bad luck struck again.

“I almost tore a ligament in my left arm and we actually thought that I broke my arm,” she said.

Luckily, it was just a damaged ligament, allowing her to go to Vegas and get down to the business of winning the show. Now she’s one win away. Just like she planned it.

“I’ve got this opportunity to do this and I don’t want to let it go,” Kianzad said. “I am in the finals for a reason. This is all meant to happen.”