The King Of Rio Has Returned To His Familiar Self Following A Move Down To Bantamweight, And Is Out To Prove That He Still Has What It Take To Be A Champion Again
By E. Spencer Kyte, on Twitter @SpencerKyte • Nov. 30, 2021

Jose Aldo looked different, but also very familiar, as he stood opposite Pedro Munhoz at UFC 265 in August.

Physically, the Brazilian legend has always looked the same, turning up in tremendous shape and holding his guard high, hands ready to uncoil, but over his previous four fights, it also felt like something was missing.

Don't Miss Any Of UFC Fight Night: Font vs Aldo

While he’d rebounded from his loss to Petr Yan on Fight Island at UFC 251 with a unanimous decision victory against Marlon Vera to close out 2020, he still looked like the guy that faded against Yan, ran level with Marlon Moraes the previous December, and had little to offer Alexander Volkanovski in what turned out to be his final featherweight appearance.

But this summer in Houston, Aldo looked different, yet alarmingly recognizable. He looked like the offensive dynamo that ruled the 145-pound weight class for nearly six years.

“Now everyone is saying that I’m climbing up the rankings again, and it’s thanks to the Navy,” explained Aldo, who takes on Rob Font in a critical bantamweight pairing that headlines Saturday’s return to action at the UFC APEX. “I was getting a little unmotivated, thinking of what I would do after fighting. I didn’t have the same ambition to climb into the Octagon, to put on great fights.

“But from the moment I stepped foot in here and met the team — met the Lieutenant and Commander Marcelo — everyone has been giving me good energy.”

It’s understandable that the fire inside Aldo began to dwindle, given that he competed at the top of the featherweight division for more than a decade, first winning the WEC title in November 2009.

But after more than 30 professional appearances and coming up short in a collection of matchups against the next wave of talent in the 145-pound ranks, the 35-year-old looked like any number of accomplished fighters that had been to the mountaintop and were now starting their descent down the other side.

He made the decision to change weight classes and drop to bantamweight in hopes of kick-starting a new chapter in his career, but initially sputtered, dropping a split decision to Moraes before getting stopped in the fifth round of his championship clash with Yan.

That’s when he knew he really needed to shake things up if he wanted to continue competing at the highest level in the bantamweight division. 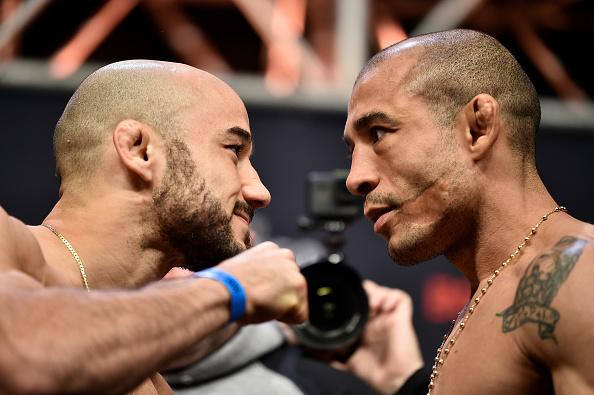 Marlon Moraes of Brazil and Jose Aldo of Brazil face off during the UFC 245 Weigh-Ins at T-Mobile Arena on December 13, 2019 in Las Vegas, Nevada. (Photo by Chris Unger/Zuffa LLC)

“I started training at the Navy after I fought for the bantamweight title,” explained Aldo, who was introduced to the group through a friend from his hometown of Manaus that was already training there. “The team embraced me since I first got here; they never tried to test me or do anything like that.

“Training here at the Navy helped me a lot — it gave me new life, new fuel,” continued the Brazilian standout. “This is what makes me train and live this fighter’s life again — waking up early, wanting to win. This partnership with them is what keeps me active; it’s what gives me the willpower to become the champion again.”

That was the new, but familiar, piece in his fight with Munhoz — Aldo got his groove back.

The twitchiness and rapid-fire attacks that punctuated his championship successes and post-title triumphs at featherweight were back as he beat his countryman to the punch more often than naught, smashing home his trademark sharp jab and more of the signature crushing leg kicks fans and observers had been longing to see.

He stood in the pocket, welcoming the return fire, confident — certain — that there was nothing Munhoz could throw his way that was greater than what he was dishing out in return.

And in the spots where he had faded or struggled in his recent outings, the moments when he got hit with a good shot or the gas tank started running low, there was the Aldo of old — stepping forward, looking to get it back and then some, still running at an incredibly high pace.

RELATED: Fight By Fight Preview | Fighters On The Rise | Brad Riddell: 'This Fight Is Different' | Rafael Fiziev Lives To Fight

“We were already soaring, but people didn’t know this side of me yet,” began Aldo, reflecting on his throwback performance against Munhoz. “In my mind, I’ve grown a lot since I started training here at the Navy, but I needed to show that. It was a very tough fight, but thankfully we were able to win.”

Victory in that tough fight resulted in an opportunity for another this weekend, as Aldo makes another December walk to the Octagon to square off with Font, another dangerous and established contender in the talent-rich bantamweight ranks.

“Rob Font is a great fighter,” the former champion said, beginning his assessment of the man he’ll share the cage with in Saturday’s main event. “He has a very versatile standup game, and he’s also a well-ranked fighter who is in search of the title. 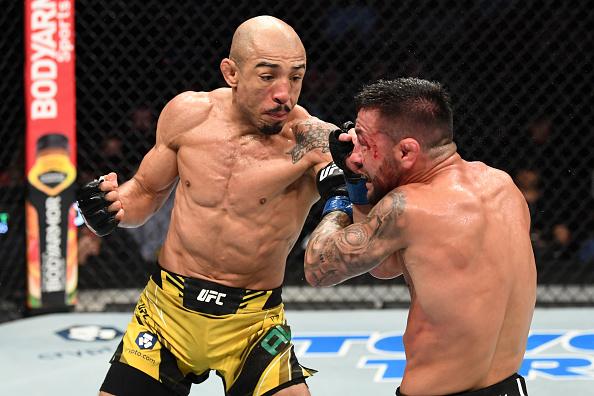 Jose Aldo of Brazil punches Pedro Munhoz of Brazil in their bantamweight bout during the UFC 265 event at Toyota Center on August 07, 2021 in Houston, Texas. (Photo by Josh Hedges/Zuffa LLC)

“But man, the way that I’m training here,” Aldo continued, “you can be sure it’ll be our victory.”

There is something about the way an athlete expresses those sentiments that sounds different, lands different when they’re not trying to convince themselves or others.

It’s one of those things you can only recognize when you listened to hundreds of competitors outline their path to victory and promise that they will be triumphant when they step into battle while sounding wholly unsure of what they just said at the exact same time.

Aldo sounded like that earlier in this move to bantamweight — saying the right things, hitting the right marks, but not quite saying it “with his whole chest” as the kids would say.

Now, he sounds like someone stating a fact, rather than trying to convince anyone of anything, and with a victory on Saturday night, Aldo will be right back where he wants to be. 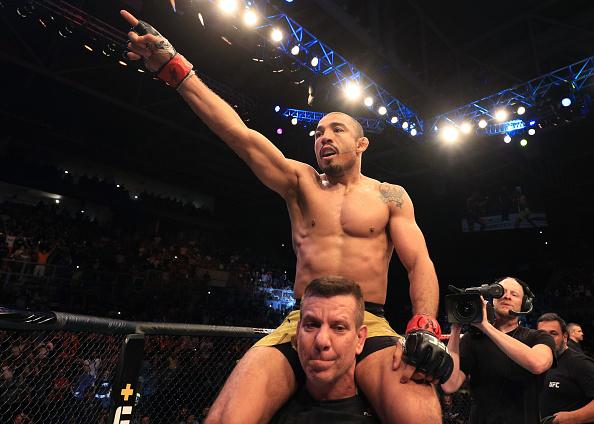 Jose Aldo of Brazil celebrates after his knockout victory over Renato Moicano of Brazil in their featherweight fight during the UFC Fight Night event at CFO Centro de Formacao Olimpica on February 2, 2019 in Fortaleza, Brazil. (Photo by Buda Mendes/Zuffa

“As soon as I win this fight against Rob Font, the next step is either to have another fight or go straight to the title, right?” he said. “I think that this fight — the way I have imagined it, the way I have been training for it — I want to go in there and win convincingly so that I can fight for the title.

“My main goal is to become the champion, and by beating Rob Font, I know I’ll be that much closer to becoming the next champion.”