Deiveson Figueiredo entered 2020 with a two-pronged goal in mind: ascend to the throne in the flyweight division and assert his dominance.

With Henry Cejudo relinquishing the title in the final weeks of the previous year to commit his attention to defending the bantamweight championship, the Brazilian contender was paired with divisional mainstay Joseph Benavidez on the Leap Day, February 29, in Norfolk, Virginia to determine the third flyweight champion in UFC history.

Benavidez was the more proven of the two and the sentimental choice; the man forecasted to rule the division at its inception who had beaten just about everyone in the division, save for long-time titleholder Demetrious Johnson, who bested him twice, preventing him from claiming championship gold.

Figueiredo, meanwhile, was less than a year removed from his first career loss — a unanimous decision defeat to fellow Brazilian and perennial contender Jussier Formiga — but entering on a two-fight winning streak, having outhustled Alexandre Pantoja during the summer and submitted Tim Elliott in the fall to push his record to 17-1 overall.

The morning before he was set to face Benavidez, Figueiredo failed to make championship weight, coming in at 127.5 pounds. He forfeited a percentage of his purse to his opponent, but more importantly, he lost his opportunity to leave Virginia with the flyweight title around his waist. 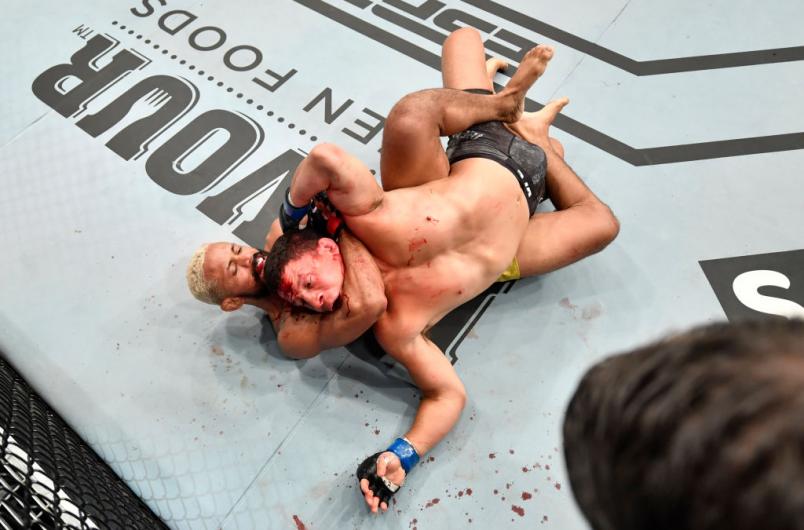 The following evening, Figueiredo would stand triumphant in the center of the Octagon, having earned a second-round stoppage victory, but the moment was not as joyous as he had initially envisioned. Missing weight resulted in the title remaining in limbo and an accidental clash of heads moments before the finishing sequence prompted many to question the legitimacy of the outcome.

An immediate rematch was booked, prompting “Deus Da Guerra” to double down on his efforts to achieve his goals.

Over the 21 weeks that followed, Figueiredo accomplished his goals, establishing himself as one of the top fighters in the sport in the process.

He rematched Benavidez on July 19 on Fight Island and left no room to question who the better man was. After making weight without issue, he came out of the gates sharp and quick, putting his rival on the deck when the first punch he threw careened off the top of his head, disrupting his equilibrium. While Benavidez would survive the attempt to finish, Figueiredo never allowed him to get back into the fight.

Radiating confidence, the 32-year-old Brazilian with the red streak through his peroxide-blonde hair stalked his veteran foe, sitting Benavidez down again with a right uppercut with 90 seconds remaining in the opening frame. With half that time still left on the clock, a straight right hand put Benavidez down again, and this time, Figueiredo pounced, unleashing a torrent of elbows that spilled crimson on the canvas before he fished his arm under Benavidez’ chin and put him to sleep with a rear naked choke.

Four and a half months after their first encounter left everyone with a sour taste in their mouths, Figueiredo finally tasted the sweetest victory, securing the UFC flyweight title in dominant fashion and bringing it home to Soure, a small municipality on the island of Marajo in the northern state of Para, to celebrate with his friends and family. 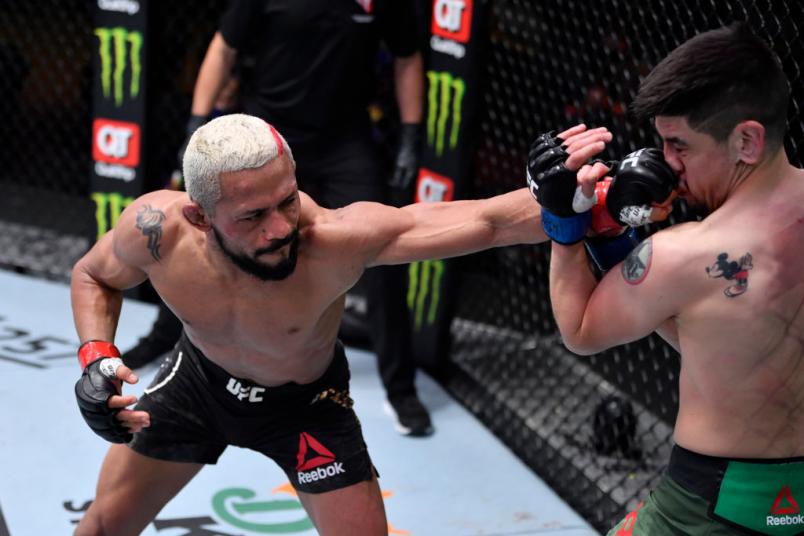 His first title defense came in November at UFC 255 in Las Vegas, where he faced off with Contender Series graduate Alex Perez. The California-based challenger was on a three-fight winning streak and coming off his most impressive performance to date, a first-round stoppage win over Formiga where he attacked the veteran with punishing leg kicks until he was rendered unable to continue.

After the reigning queen of the flyweights, Valentina Shevchenko, earned her fourth successful title defense and second victory of 2020 by dispatching Jennifer Maia in the co-main event, Figueiredo sauntered to the cage for his first appearance as champion, and made short work of his first challenger.

Less than two minutes into the contest, Perez drove forward for a takedown attempt, but left his neck exposed, providing the Brazilian champion with the opportunity he needed to clamp down on a guillotine choke and secure the finish. In a flash, Figueiredo had defended his title and solidified his place atop the division, and before he left the venue that evening, the stylish titleholder had booked his next fight.

UFC.com's Fighters Of The Year

Earlier in the evening, Brandon Moreno earned a first-round stoppage victory over Brandon Royval in a battle of contenders named Brandon. During his post-fight media availability, the dangerous and durable Mexican standout, who was irked that Perez was tabbed to face Figueiredo ahead of him, made it known that he wanted his opportunity to share the Octagon with the champion.

Aware of his comments and never one to back down from a challenge, Figueiredo made it clear he was ready to face “The Assassin Baby” and the two were penciled in as the new main event for UFC 256, just three weeks later.

Rather than returning home to Brazil, Figueiredo stayed in Las Vegas, working out at the UFC Performance Institute alongside the team of specialists at the state-of-the-art facility and enjoying life in “The Fight Capital of the World.”

Twenty-one days after they each earned first-round victories, Figueiredo and Moreno were back inside the Apex, ready to do battle with the flyweight title hanging in the balance. What followed was one of the best fights of the year and the top battle in the history of the division.

Over 25 minutes, no quarter was asked and none was given as champion and challenger dished out and absorbed a hellacious amount of punishment. Just when one competitor seemed to be edging ahead ever so slightly, the other would storm back, ripping off a three or four strike combination that instantly told their counterpart and those captivated by the action that they were not ready to cede their position in the cage.

When the dust settled and the tens and nines were tallied, the bout ended in a majority draw, with the one-point penalty Figueiredo incurred in the middle stanza keeping him from a second successful title defense in 21 days.

Regardless of the result, Figueiredo had showed his championship mettle, and his performance became even more impressive when it came out following the bout that the titleholder had spent several hours in the late evening and early morning hours before the contest in the hospital with a stomach ailment.

After beginning the year with a 17-1 record and a concrete, double-barreled goal in mind, Figueiredo ended 2020 with a 19-1-1 record, the UFC flyweight title around his waist, and an immediate rematch with a new rival penciled in for the first half of next year.

Though some may argue he didn’t achieve his goal of proving his dominance as a result of the draw with Moreno, it’s hard to deny just what an impressive campaign it was for the 32-year-old standout.

In the 42 weeks between his first appearance of 2020 in Norfolk, Virginia and his final appearance inside the UFC Apex, Figueiredo headlined four events, fought for championship gold on three occasions, and logged three stoppage finishes, along with co-authoring a bout that is sure to land on the Fight of the Year podium.

By comparison, the other seven champions on the men’s side of the roster competed nine times in total, while only two other champions — Shevchenko and Adesanya — put their titles up for grabs twice.

Kevin Holland may have logged more appearances and victories, but while Dana White’s favorite “loudmouth” used this year to work his way into contention in the middleweight division, Figueiredo made his dreams come true while cementing his standing as the top flyweight in the sport and one of the most consistently entertaining competitors on the UFC roster in 2020, and has everyone on the edge of their seats, eagerly waiting to see what he does for an encore in 2021.