The highly unofficial UFC.com best-of season comes to an end with the ten best fighters of 2020…

It should tell you what kind of year 2020 was when the middleweight king beats two scary challengers and is at the number 10 spot. That’s probably due to his tactical win over Yoel Romero in March, which didn’t exactly set the world on fire, but hey, it does take two to tango. And once September rolled around, the man on the cover of EA Sports’ UFC 4 video game put on a video game-esque performance in halting previously unbeaten Paulo Costa in less than two rounds.

Charles Oliveira has long been one of the most underrated fighters on the UFC roster. My opinion on that is that it’s due to his issues with the scale when he was a featherweight. But since moving back to 155 pounds, no one can deny the emergence of “Do Bronx,” and in 2020, it was back-to-back big wins for the Brazilian, who turned back Kevin Lee and Tony Ferguson in a year to remember.

After Glover Teixeira’s 2-3 run from 2016-18, you’d be hard pressed to find anyone that thought the Brazilian veteran would be on a list like this in 2020 at the age of 41. But here he is after extending his current win streak to five with finishes of Anthony Smith and Thiago Santos that may just have him looking at a second light heavyweight title shot in 2021.

Brandon Moreno nearly took the top spot this year after a pair of wins over Jussier Formiga and Brandon Royval that was topped by an epic five-round draw with flyweight champion Deiveson Figueiredo in December. A win would have made history for “The Assassin Baby,” as he would have become the first Mexico native to take UFC gold, but I’m sure Moreno will be back in the title mix in 2021, as he has to have a rematch with Figueiredo. 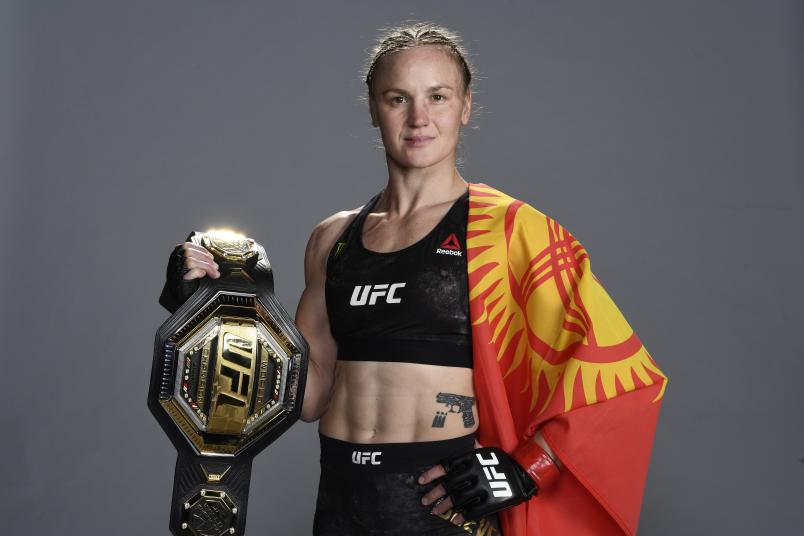 Valentina Shevchenko of Kyrgyzstan poses for a portrait backstage during the UFC 255 event at UFC APEX on November 21, 2020 in Las Vegas, Nevada. (Photo by Mike Roach/Zuffa LLC)

The Queen of the flyweight division remained untouched in 2020, with a stoppage of Katlyn Chookagian and a clear-cut decision win over Jennifer Maia keeping Valentina Shevchenko on top at 125 pounds. And while there are some solid contenders in line for a shot at the belt, the big fight for “Bullet” is a third meeting with Amanda Nunes. 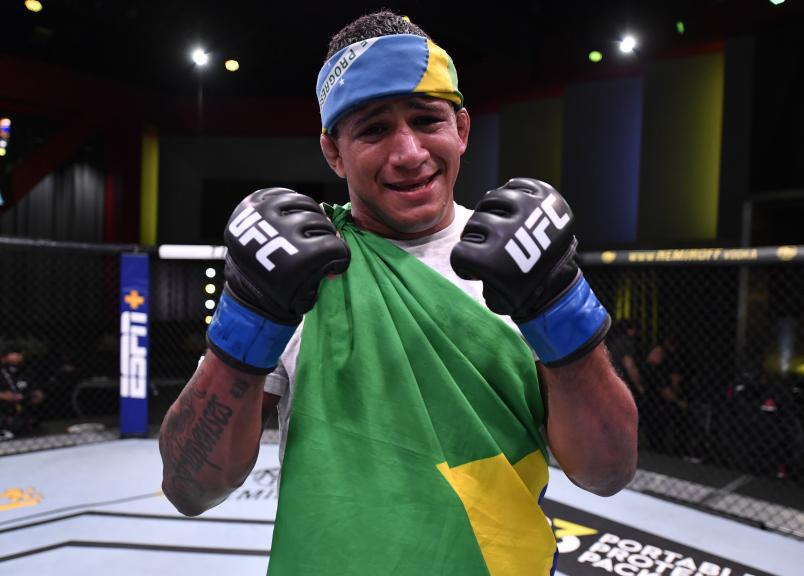 Gilbert Burns of Brazil reacts after his victory over Tyron Woodley in their welterweight fight during the UFC Fight Night event at UFC APEX on May 30, 2020 in Las Vegas, Nevada. (Photo by Jeff Bottari/Zuffa LLC)

Another fighter who could have been sitting on top of this list with a championship belt around his waist is Gilbert Burns, who parlayed impressive wins over Demian Maia and Tyron Woodley this year into a shot at Kamaru Usman’s welterweight crown before that wonderful 2020 luck intervened. Now waiting for a rescheduled date with “The Nigerian Nightmare,” Burns has every intention of kicking off 2021 by winning a title. 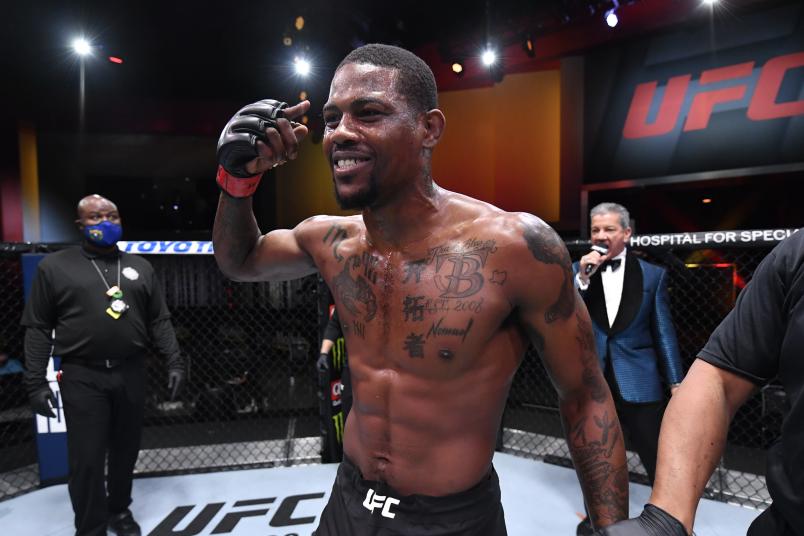 Kevin Holland celebrates his KO victory over Jacare Souza of Brazil in their middleweight bout during the UFC 256 event at UFC APEX on December 12, 2020 in Las Vegas, Nevada. (Photo by Jeff Bottari/Zuffa LLC)

To many, 2020 was the worst year ever. For Kevin Holland, it was a year of opportunity, and he not only seized every one that he could, but he capitalized on each, going 5-0 with four knockouts in bouts against Anthony Hernandez, Joaquin Buckley, Darren Stewart, Charlie Ontiveros and “Jacare” Souza. He even picked up three Performance of the Night bonuses, crashed the top ten at 185 pounds and got his jiu-jitsu black belt. That’s one memorable year. 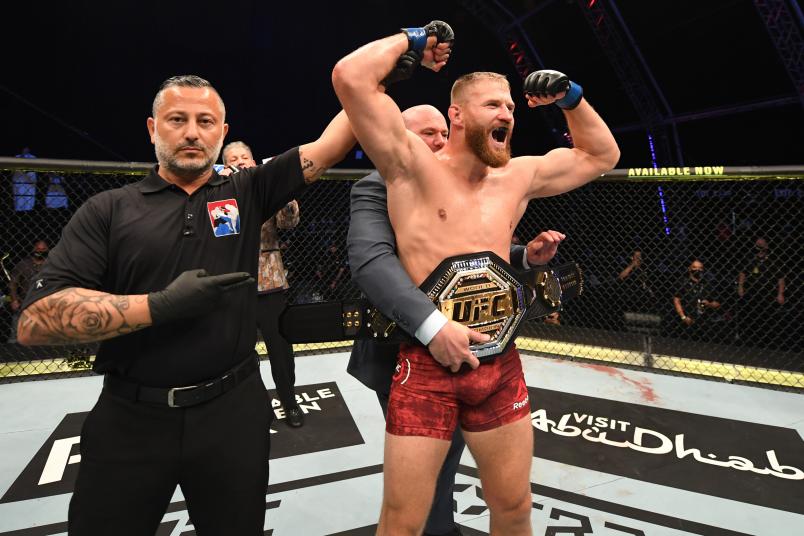 Going 2-4 to start his UFC career, it didn’t look like Jan Blachowicz was going to one day wear a championship belt around his waist. But after that rough beginning, the Poland native went 8-1, with the two most recent victories being a February knockout of Corey Anderson in a rematch of their 2015 bout, and a September stoppage of Dominick Reyes that earned him the vacant UFC light heavyweight crown. The victory over Reyes was a shining example of what happens when you keep pushing through the bad times and continue to chase your goals.

It wasn’t too long ago that fight fans wondered if the UFC’s flyweight division was going to be a thing of the past. But fast forward, and as 2021 approaches, the 125-pounders are in a better position than ever, there are a host of intriguing contenders and prospects, and the man ruling the weight class – Brazil’s Deiveson Figueiredo – has the potential to dominate the class and is the pick for 2020 Fighter of the Year. Beginning the year with a stoppage of Joseph Benavidez that would have earned him the vacant flyweight crown if he had made weight for the February bout, Figueiredo instead got his belt five months later by finishing Benavidez a second time. Then came a first-round submission of Alex Perez, and Figueiredo ended the year with a Fight of the Year draw with Brandon Moreno. Well done, Mr. F, well done.