Penn State’s Anthony Cassar Has Plans On Becoming Most Exciting Fighter In The Light Heavyweight And Heavyweight Division; His Journey Begins At iKon FC 6
By Walker Van Wey • Nov. 30, 2022

After not qualifying for State in high school and not winning NCAA gold until his final NCAA match, the latest Penn State Nittany Lion to step into the cage has always had his freak athleticism and strength to fall back on. Now that the skill has officially caught up with him, Cassar is ready to take over the sport of MMA from the jump.

“I think coming in with our wrestling base is a huge advantage and there’s always that threat, and that’s going to continue to make the hands look even better and open up even more,” Cassar said. “When I want to, I’ll just take them down and do what we want to on the mat. The plan is to really mess people up right away.”

Cassar’s drive to be great has always matched his tangibles. When they came together, he was the most dominant heavyweight wrestler by a wide margin. As he scopes out the landscape of the light heavyweight and heavyweight divisions, he sees giant gaps between his game and the class of each division. Should his skillset transfer over the way cornerman Bo Nickal’s has, Cass sees an easy journey to MMA immortality. 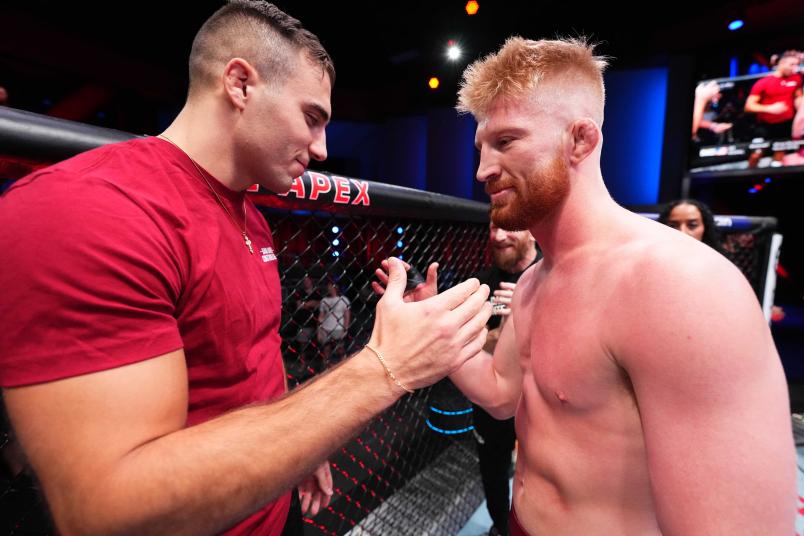 “Just seeing the competitors and the size of the guys in the UFC and my body, it just seems like 205 makes sense for me right now,” Cassar said. “I already know what it takes to build up to that heavyweight body, so it’s nothing new to me. I figured why not dominate in two weight classes?”

In a sport of fluctuating weight classes, it’s not impossible for a fighter to be offered to fight both Cassar and Nickal. Cassar is already laughing in sympathy at the potential opponent.

READ: Cassar And Nickal Are Teammates Closer Than Friends

“That’d be tough for whoever that opponent is to have to fight both of us,” Cassar laughed. “I’m sure there will be some overlap, but we’ll see. They’re going to have to at least triple the payday of that poor soul. The first person to fight them is going to get a read on them, so it’s going to be even worse the second time around.”

Cassar assures fans and competitors alike that he isn’t coming into MMA to simply be “a wrestler who fights.” He’s excited to show the field that he’s always been a fighter in a singlet.

“In wrestling, you can tell how somebody’s going to fight, in my opinion, based on their wrestling style,” Cassar said. “I think it translates a lot. Watch some of Ed Ruth’s old matches and it’s kind of the way he fights. You can go back and watch Bo’s. He was kind of ‘go for broke,’ and can go to his back and take high risks, just like in his last fight. I think my style is going to translate well. I’m pretty natural with my hands and I think that my explosiveness and my power is going to translate well.”

Cassar didn’t simply will his way into NCAA greatness. Where there’s confidence and an eagerness to put his new sport in the palm of his hand, Cassar is as cerebral as he is excited.

Don’t expect the National Champion to go out and underestimate anybody’s power he shares the cage with. Any fighter is mortal, especially in the upper weight classes, but with the right gameplan, ground game and conditioning, you’re one dangerous 205er, and Cassar knows it.

If he has it his way, the whole light heavyweight division, followed by heavyweight, are about to be flipped completely upside down.

“When it comes to MMA and the UFC, it’s a very high risk. Just getting out of the first round is easier said than done,” Cassar explained. “It’s a very high-risk situation where anybody could be knocked out at any point. There’s also guys like Stipe (Miocic) and (Jon) Jones coming up who are going to change that and you’re going to have to be locked in all five rounds and they have great technique and high-level skill. That’s something I plan to change in that sport, as well, is adding a little more entertainment and style and skill to that division.”