VanZant Puts Weight-Cutting Struggle Behind Her In Move to 125 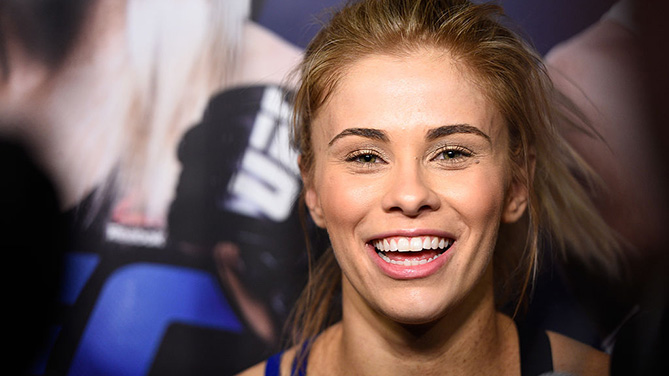 Paige VanZant never publicized her struggle to make 115 pounds. She’s a fighter and the go-to line when discussing an upcoming fight is, “I’ve never felt better.”

But it’s been a long time since VanZant felt good inside the Octagon. So she’s making a change and moving weight classes starting at UFC 216 in a flyweight bout vs. former bantamweight contender Jessica Eye.

“I have trouble making 115 and I’ve never told anyone that before. It’s kind of been one of my best kept secrets,” VanZant told UFC.com this week. “I cut from like 137 normally, so cutting 22 pounds for somebody my size is pretty significant. So I just made the decision that I don’t want to kill my body.”

WANT TO SEE PVZ IN ACTION AT UFC 216? TICKETS GO ON SALE TO PUBLIC THURSDAY. GET THEM HERE

It’s been a liberating year for the former Dancing With The Stars standout. VanZant decided to move back home to Portland, Oregon earlier this year. She left behind Team Alpha Male in Sacramento, Calif. to start fresh and she’s loving the change.

“I’m officially fighting out of Gracie Barra. It’s a big change in my life but I couldn’t be happier with the way things are going,” VanZant said.

The move away from Urijah Faber’s famous fight outfit wasn’t one based in turmoil. VanZant still considers herself a part of the team in Cali, but she found that she was sacrificing too much being away from family and wanted to be home.

@monsterenergy #monsterhydro Hydrate and Energize with energy, electrolytes and B vitamins @hansmolenkamp
A post shared by Paige VanZant (@paigevanzantufc) on Aug 25, 2017 at 11:10am PDT

The first fight camp in Oregon has been rejuvenating for VanZant, who takes on a significant challenge in former Top 5 bantamweight Eye. The two have become friends over the years through different UFC functions, but VanZant and Eye agreed that if they have to fight they want to make it a memorable one.

“I look at her losses and she’s only lost to top-ranked fighters. If you look at my losses – I’ve only lost to the best in the 115 division. I think it’s the perfect matchup,” VanZant said. “I love the girl but it was time for me to move up and time for her to move down. We kind of texted each other and said, ‘Hey, you want to bang it out?’ And we both said, ‘Yeah, let’s do it.’”

As surprising as it may be, Oct. 7 at UFC 216 will be only VanZant's second appearance on Pay Per View. It’s a big stage and she will be looking to make a statement as this season of The Ultimate Fighter begins to play out on FS1. This year the winner of the show will be crowned the new UFC women’s flyweight champion, and VanZant has her eyes on the entire crop of fighters competing in the house.

“I’m so excited about this season. I can’t wait to watch it and especially with me moving up to 125 division it opens up a lot of potential matchups for me,” she said. “So I’m going to be watching The Ultimate Fighter very closely. I can’t wait to see who gets crowned the champion in this division because now it’s mine.”