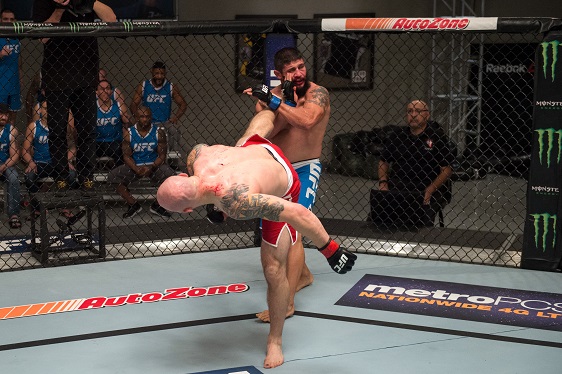 The season-long woes of Team Garbrandt finally came to an end on the most recent episode of The Ultimate Fighter, as Justin Edwards got a win over Joe Stevenson in the final preliminary round matchup.

It was a battle between two of the more experienced Octagon veterans in the house, with Edwards returning from more than two years away while Stevenson was searching for a second chance following a long, arduous battle back from addiction that nearly knocked him out of the sport for good.

Following a tough four-fight losing streak in his last stint with the UFC, Stevenson talked candidly about his battle against alcohol addiction, where he called himself a "functioning" drinker who would continue on with his normal, everyday life but was doing it all while inebriated. When he finally got clean and sober four years ago, Stevenson vowed to turn his life around for the four sons he has at home.

"To me, the redemption is showing people what I can do sober," Stevenson said of returning after battling his addiction. "It's not about the money to me. It's about redemption."
Get to know more about tonight's fighters: Joe Stevenson | Justin Edwards

Not only did Stevenson manage to get himself back into fight shape, but he also landed a job in Hollywood, where he began working with the cast and crew on the series "Kingdom," which is focused around a mixed martial arts gym in California. Stevenson appears as himself on the series but also acts as a stunt and fight coordinator for the show, which features several other top UFC fighters, including Cub Swanson, Justine Kish and Kenny Florian.

But as time went on, he got the fever back to fight, and when he asked his kids if they would like to see him compete in the UFC again, he received a resounding “Yes” and that's all Stevenson needed to accept the offer to return to The Ultimate Fighter.

As for Edwards, following a trio of losses in his own UFC career, the Ohio native returned home, where he picked up a full-time job while training in between his eight-hour shifts. Edwards never gave up his dream of returning to the UFC despite the effort it took to stay in fight-ready shape. Edwards not only stayed busy with his normal work shifts, but then he would routinely make the hour and 20 minute drive to Dayton, OH, where he would work on his mixed martial arts skills several times a week. Many times in the morning, Edwards would go to the gym long before anyone else was even awake just to make sure he got his training in before the day started.

Of course, Edwards is still haunted by the 2-5 record that he amassed while in the UFC, so this second opportunity to prove himself really was a shot at redemption.

"I don't think anybody wants it more than me," Edwards said. 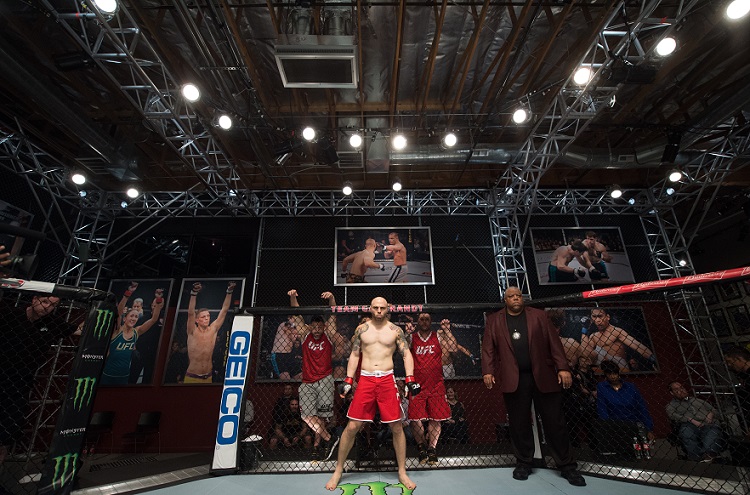 ROUND 1
As the fight got underway, Edwards quickly established his dominance with an offensive flurry on the feet as he started lighting Stevenson up with punches and kicks. Edwards was pouring on the punishment but Stevenson managed to stay standing despite eating several hard shots throughout the first couple of minutes in the fight. Stevenson finally swooped in to look for the takedown after struggling to get inside Edwards' reach, but he nearly got himself locked into a guillotine choke for his trouble. Once the fighters worked back to the feet, Edwards continued his assault, but the vast amount of punches and kicks he threw started to take its toll as he slowed down with each passing minute. Stevenson took advantage of his opponent's waning conditioning with some stinging combinations and a takedown before the end of the round. Still, Edwards seemed to do enough to earn the round after a blistering start to the fight.

ROUND 2
The minute-long break did wonders for Edwards, as he once again came charging out of the gate with a huge barrage of strikes that did a lot of damage to Stevenson. In one particular exchange, Edwards was absolutely unloading on Stevenson against the cage and it looked like he might put the former Ultimate Fighter winner down for good, but somehow the crafty veteran found his way out of trouble. The output once again tired Edwards out, but Stevenson just couldn't take advantage. The best opportunity for a finish for Stevenson came when he grabbed on to a guillotine choke on the ground, but Edwards stayed patient before slipping free. Edwards then returned the favor with a guillotine choke of his own that looked even tighter, but Stevenson survived the submission attempt. As the round and the fight came to a close, Edwards cracked Stevenson with a few more shots on the feet and it seemed clear he had done enough to win.

When the fight ended, both coaches believed there could have been a third round but the referee notified them that the matchup was over with the judges rendering a decision. 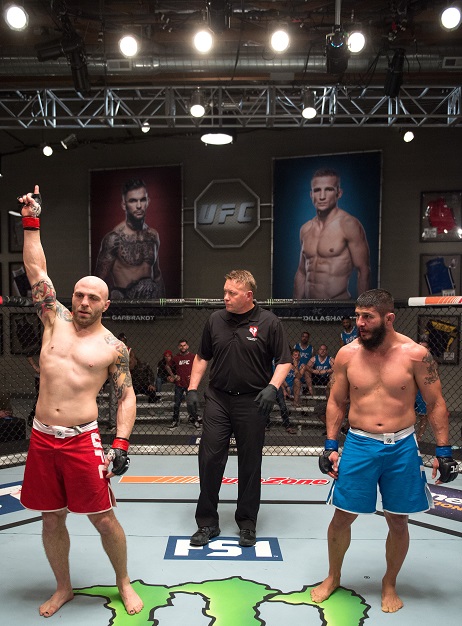 Justin Edwards earned the unanimous decision win over Joe Stevenson to move into the next round of the tournament.

Once the fight was settled, coaches Cody Garbrandt and TJ Dillashaw sat down with UFC President Dana White to discuss the wild card matchup to see who would be getting a second opportunity to move into the quarterfinal round.

A couple of the fighters were knocked out of the conversation due to medical suspensions, but the coaches argued for their choices to make it into the wild card fight. Ultimately, White decided to give the second chance to Hayder Hassan and Joe Stevenson, who will meet next week to determine the final quarterfinalist in the tournament.

Garbrandt didn't agree with the decision, not only because he felt he should have put two of his fighters together for a spot in the next round, but also due to the damage Stevenson took in his fight with Edwards before turning around to compete again in just six days’ time. Still, Dillashaw disagreed and so did White, which means Stevenson will get another shot at redemption when he faces Hassan next week.