The 2020 Class Inducted Into The UFC Hall Of Fame Honors Georges St-Pierre, Kevin Randleman, Marc Ratner, and Jones vs Gustafsson I
By McKenzie Pavacich, on Twitter @mpavacich_ • Sep. 24, 2021

The long-awaited night finally arrived for the UFC Hall of Fame Class of 2020 to make it official Thursday evening inside the Park Theater at the Park MGM in Las Vegas, with ticket proceeds benefiting the Candlelighters Childhood Cancer Foundation of Nevada.

First up to the stage was Forrest Griffin to present former interim UFC lightweight champion Dustin Poirier with the inaugural Forrest Griffin Community Award for his diligent work outside of the Octagon with The Good Fight Foundation.

“It was hard to pick one fighter, but at the same time it wasn’t, because Dustin Poirier has done so much,” Griffin said. “It’s been at the forefront of everything he’s done. He’s really brought it to fruition.”

The Good Fight Foundation’s primary focus is to raise money from fight memorabilia to benefit underserved communities, initially in Louisiana and now across the globe, in the fight against societal issues like “food insecurity, health care and environmental disaster relief.”

.@ForrestGriffin sounds off on the inaugural Forrest Griffin Community Award and why @DustinPoirier is a model first recipient.

“I think in combat sports, a lot of us come from a background that’s maybe more rugged than the average person, so we’re a little more in touch with the places and the people that need the help,” Poirier said on the red carpet ahead of accepting his award.

.@DustinPoirier's work outside of the Octagon with @TheGoodFightFDN is recognized tonight as he receives the inaugural Forrest Griffin Community Award. 💎 ⤵️

Jon Jones appeared in Las Vegas for his induction into the Fight Wing of the UFC Hall of Fame for his 2013 light heavyweight title fight against Alexander Gustafsson. Gustafsson gave a few words via video before Jones took the stage, with both fighters touching on how the bout pushed them into “the deepest waters” and made them both a “better fighter and better man.”

“It’s like a badge of honor, an early one, that I get to carry into my next battles,” Jones told UFC.com on the red carpet. “I feel more established, in a way, and I feel very grateful for the honor. There’s nothing bigger in the sport.”

Jones vs Gustafsson I: "The greatest UFC light heavyweight title fight, ever."

Jon Jones (@JonnyBones) shares his thoughts ahead of being inducted into the Fight Wing of the UFC Hall of Fame alongside Alexander Gustafsson (@AlexTheMauler).

A true icon in combat sports and the man who spearheaded the efforts which led to the explosion of mixed martial arts in the United States and across the globe, UFC Vice President of Regulatory Affairs Marc Ratner received a standing ovation following his speech accepting his position in the Pioneer Wing of the UFC Hall of Fame.

“The journey for me was state by state, and finally in 2016, having New York approve (the sanctioning of mixed martial arts) was really the culmination of years, so everything for me revolves around that,” Ratner said when asked of his favorite moment in a career filled with incredible moments.

.@MarcRatnerUFC's impact on combat sports is vast, and his legacy is now enshrined as an inductee to the Contributor Wing of the UFC Hall of Fame.

The family of former UFC heavyweight champion Kevin Randleman, joined by Mark Coleman and Bas Rutten, were present to represent “The Monster” as he was posthumously inducted into the Pioneer Wing.

Elizabeth Randleman gave remarks on her husband’s widely admired career, and the accomplishments that led to his being enshrined in the UFC Hall of Fame.

“Kevin Randleman was an extraordinary human. He loved the sport with every inch of him.” 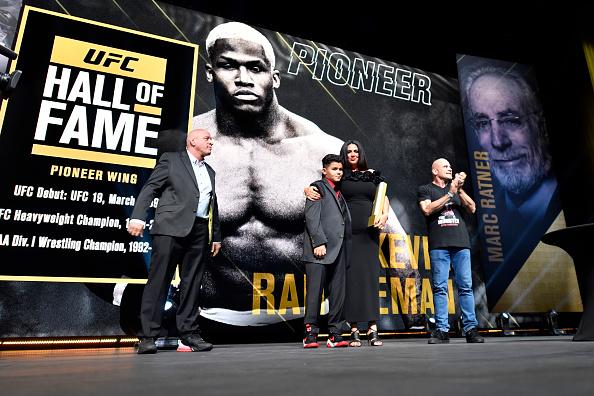 Last, but furthest from least, former UFC welterweight and middleweight champion Georges St-Pierre capped off the night with his induction into the Modern Wing of the UFC Hall of Fame. Inducted by fellow Hall of Famer and one of St-Pierre’s idols and inspirations, Royce Gracie, “GSP” shared that this is by far the “greatest achievement of my athletic career.”

“I always had faith in myself, but there’s no certainties,” St-Pierre said when asked if he ever imagined this achievement would come from a seven-year-old’s decision to take up karate for self-defense and a boost of confidence. “Every human being can accomplish something and get to where they want in life. That was my dream, and I made a lot of visualizations and saw it through.”

One of the best to ever do it and the man who put Canadian mixed martial arts on the map — @GeorgesStPierre's name will live on forever in the Modern Wing of the UFC Hall of Fame.