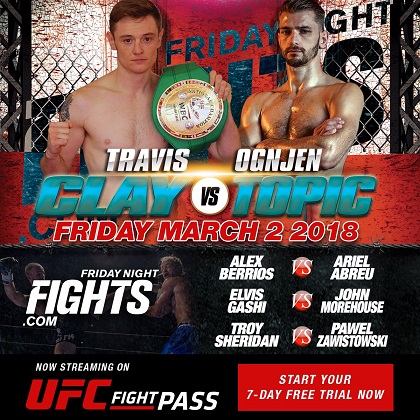 Less than a month after adding boxing to its live content, UFC FIGHT PASS will bring yet another combat sport to subscribers worldwide.

For Ognjen Topic, a Bosnian Serb who lives and trains in nearby New Jersey, this is a long overdue homecoming. The 29-12-2 KO artist has travelled the world adding to his arsenal.

“My parents let me do Taekwondo when I was 14 or 15, but they expected me to go to school, make something of myself,” Topic began.

However, everything changed for Topic one day while casually watching ESPN.

“They were showing highlights of a Muay Thai match, and I fell in love with it right away. The fighters weren’t jumping all over the place,” Topic explained. “They were fighting.”

When Topic began training Muay Thai in 2005, he made a discovery: he had an abundance of natural talent. Topic began to win tournaments and compile a hoard of belts and trophies. Eventually, he was forced to choose between a career in graphic design or a career in professional Muay Thai.

“It was becoming difficult for me to juggle between the two,” Topic said. “But I was more passionate about Muay Thai and I made my decision.”

Basing himself in NJ, he embarked upon a career that took him across the Pacific to Asia, where he fought in the historical hotbed of his sport.

Taking fights in Thailand and China, he took every opportunity to fight the best opposition he could find, even opponents up to 40 pounds larger. The constant grind of traveling throughout Asia was exhausting for Topic, but the Far East was where ne needed to be to become a world class fighter.

Now, he returns to the US a vastly improved fighting machine and is ready to shine on the first live Muay Thai event to air on UFC FIGHT PASS.

“Once in a lifetime opportunity for us Muay Thai guys,” Topic said of fighting on FIGHT PASS. “We really do give everything we have for this sport, but there hasn’t been a breakthrough. A lot of people don’t know what Muay Thai is. This is an opportunity for the world to see the sport.”
When asked if he had a message to the MMA/UFC fans that are thinking about checking out the event, Topic offered a candid response: “You’re going to see elite level Muay Thai. People are going to see how great this sport is.”