UFC events that are struck by disappointing circumstances tend to rise up and deliver more than anyone expected.

UFC 213 lost its highly hyped main event just hours before doors opened at T-Mobile Arena when Amanda Nunes was forced to pull out of her title fight with Valentina Shevchenko due to illness.

Despite the absence of the women’s bantamweight title fight, the interim middleweight title clash between Robert Whittaker and Yoel Romero more than made up for the loss of Nunes-Shevchenko. Australia’s Whittaker was impressive as he overcame a first-round leg injury and an assortment of takedown attempts that kept coming as if they were on a conveyor belt without a stop button.

Whittaker’s victory extends the longest win streak in the middleweight division to seven straight wins (eight in a row overall). “The Reaper’s” resume may be better than any other fighter in his division after defeating Romero just three months removed after a TKO win over division goliath Jacare Souza.

Next up for Whittaker is a unification title fight against champion Michael Bisping for the undisputed crown later this year, UFC president Dana White confirmed Saturday.

These are the UFC 213 Talking Points

In his last outing, Whittaker steamrolled Souza, landing a highlight-reel head kick and finishing the Brazilian with an ensuing flurry of punches. That performance was preceded by a one-round firecracker of a fight against Derek Brunson, where Whittaker also finished by knockout. 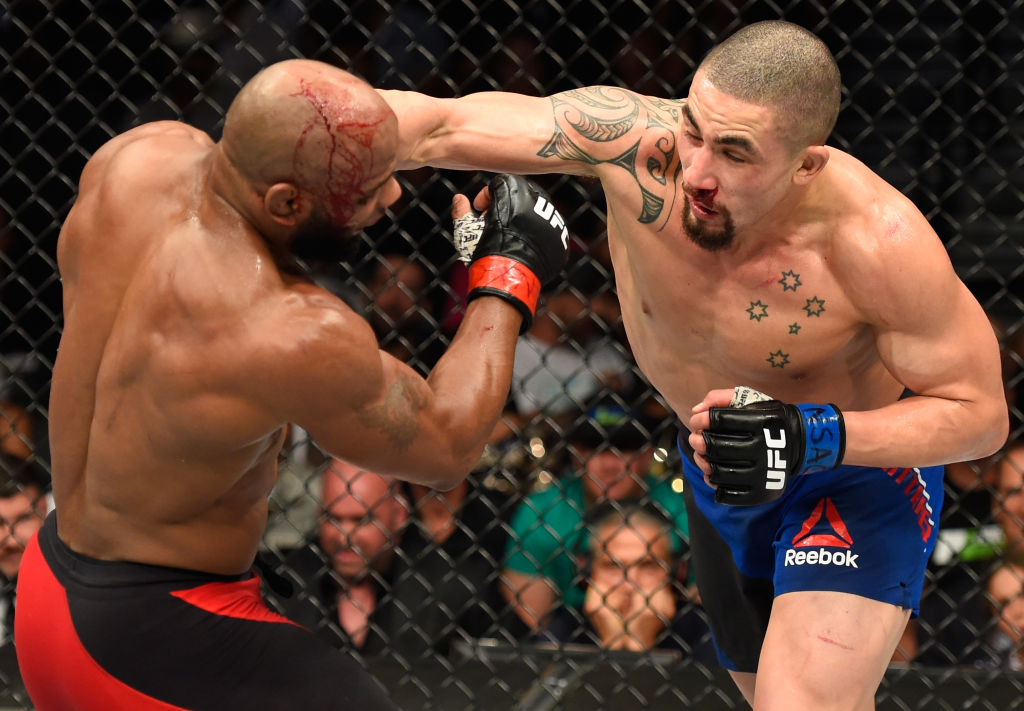 Against Romero, the new interim middleweight champion showed another wrinkle to his game. He went down two rounds and dug deep to survive and come back to win.
Whittaker had to conceal his injury to stay in the fight. He had to fight through adversity, which he’s proved more than capable of doing throughout his career after a rough go at welterweight to start his UFC run.

“My knee was definitely hurt,” Whittaker said. “I injured it in camp and Romero’s kick set it back weeks. I know that Romero will capitalize on any weakness he sees so I had to play it off. That’s just what champions are made of.”

Back to drawing board for Romero

Yoel Romero’s UFC record was perfect before he ran into Robert Whittaker. He’s overcome every opponent in his path and came close to doing it again at UFC 213.

Even with the setback, Romero remains as one of the best in the division. A close win against Jacare Souza in 2015 ended in a split decision, and with Souza coming off a loss of his own to Whittaker, a rematch with Romero may be just what the doctor ordered.

Anthony Pettis said heading into his critical fight with Jim Miller that he wanted to make people enjoy watching him fight again.

“Showtime” can consider his victory “mission accomplished,” because he looked like the old Pettis. He used his lethal leg kicks to brutalize the body of Miller, who was game as ever despite getting cut with a head kick in the second round.

Back in the win column and at home at 155 pounds, Pettis is looking to get back in the title picture.

“I was looking for the finish the whole time. I even landed a couple of head kicks clean but Jim Miller is as tough as it gets and he just kept coming,” Pettis said. “I’ve been working hard on my wrestling defense and I got to show that off along with my striking tonight.

“It was a fun fight and now I’m just looking forward to getting back out there. I’ll tell you what’s next for me: three-time world champ.”