In 2017, Tecia Torres got engaged, earned her master’s degree in Criminology, and scored the first finish of her MMA career, one of three consecutive wins last year that propelled her into a co-main event against fellow strawweight contender Jessica Andrade this weekend.

In short, it must be nice to be “The Tiny Tornado” these days.

“Life’s pretty good right now,” she said. “It’s treating me well, my hard work’s paying off and good things are coming to me.”

That’s low-key and focused Tecia Torres right there, focusing on what’s ahead and not what happened yesterday. But there was a time when she wondered if MMA was going to be a career; if all the blood, sweat and tears were going to pay off like they are now.

“Probably before I got to the UFC, when I was in Invicta,” she said. “It was really hard and challenging. I was still working a full-time job and trying to balance regular life with making a little money. That was pretty unmotivating, but once the UFC opened the door for us, I knew there would be opportunities to make a career out of it.”

Four wins in Invicta FC, including a trio of victories over Paige VanZant, Felice Herrig and future UFC champion Rose Namajunas, established Torres as a fighter to watch, but after her stint on The Ultimate Fighter 20, she became a contender. Today, she’s 6-1 in the Octagon, ranked fifth in the world, and the winner of Saturday’s bout is expected to be next in line for a crack at the 115-pound title.

“That’s what I suppose,” said Torres of a title shot being the result of a win in Orlando. “I haven’t heard anything from the UFC, but I can’t see there being anybody else deserving of it outside of us.”

She’s right, as Torres will have won four in a row, and if Namajunas retains her title in her April rematch with Joanna Jedrzejczyk, there’s a natural storyline there with the strawweight stars having split their first two bouts. But first things first, and for Torres, that’s Brazil’s Andrade, who is coming off an impressive victory over Claudia Gadelha.

“Jessica is a very tough opponent, quite possibly my toughest opponent yet,” said Torres. “She has a similar body structure to me in terms of height, and we’re both pretty stocky in terms of muscle. But she likes to be a bully a little bit and come in with her hands a little bit wild. I think I’m more technical than her, I believe I have speed on her, and strength-wise I’d say we’re pretty equal. I think we’re both great wherever the fight goes, so it’s going to be interesting to see how it plays out. I’m a different opponent for her just in terms of my movement. It definitely catches people off guard, so I’m gonna use that to my advantage.” 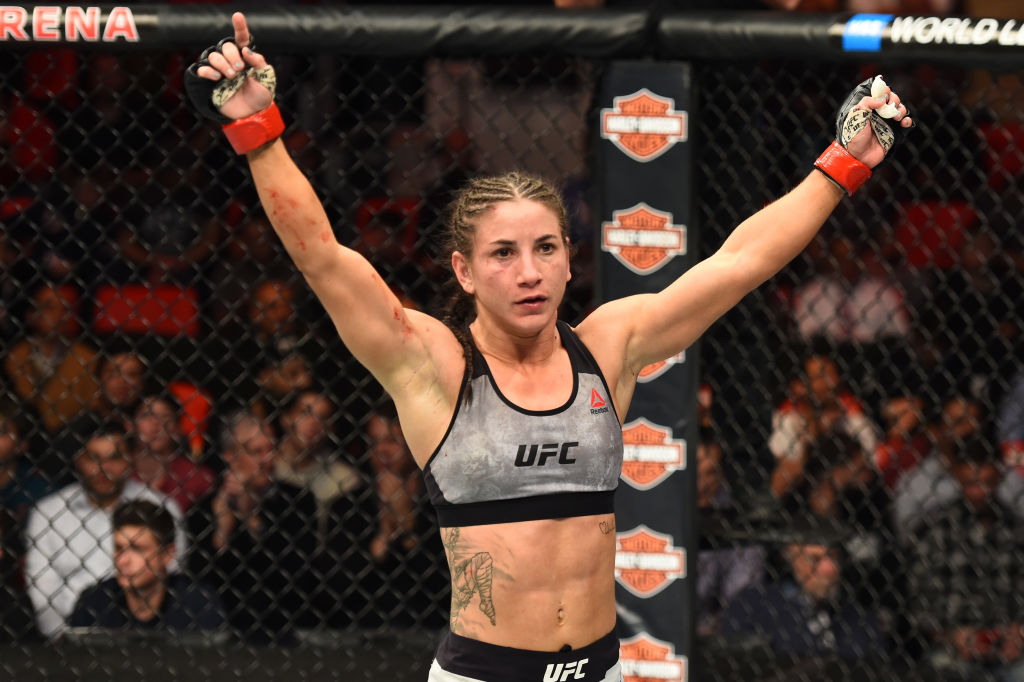 Another trick Torres has up her sleeve is her toughness. It’s not something that’s first on her list of attributes when it comes to the public, but she’s undoubtedly proven her grit over the years.

“I’m a tough chick and I’ve been in there with the best of the best, sometimes even more than once,” she said. “People have their opinions, and I’m not too much in the limelight like some of the girls in the division, but I definitely believe I’m top five for a reason and I’ve been top five since I’ve been in the UFC for a reason. It’s my time to make a bigger statement and I think with each fight I’m getting closer and closer.”

A championship belt around her waist wouldn’t be a bad statement to make, and if her fiancé, bantamweight contender Raquel Pennington, gets a title shot sometime this year and then gets her hands on a belt this year as well, now that would be some story.

“We really don’t go too much into that, but I’m sure that’s definitely in the back of our minds,” Torres said. “We’re both just so close to title contention and fighting for the title, but we don’t try to look too ahead. We just look at our next opponent. I’m sure coming off this fight with Andrade, should I come out the victor, which I plan to do, they’ll be more talks of that.”

Talk away. “The Tiny Tornado” is ready for it all.

“My focus is definitely on Andrade, but in my head, my dream and my fairytale is to make it a reality and become the champion of the world,” she said. “I definitely want to be in that number one spot, so it’s not outside of my thoughts, but it’s not my priority. My priority is Jessica.”