Top 10 Is Great, But Yan Wants The Belt

Petr Yan’s arrival in the UFC generated a great deal of buzz, but even the most ardent believers in the Russian bantamweight’s talents probably wouldn’t have forecasted that the 26-year-old would have such an immediate and profound impact in the stacked 135-pound weight class.

Considered one of the top prospects competing outside of the Octagon during his days fighting under the ACB banner, Yan inked a contract with the Ultimate Fighting Championship in January 2018 and debuted six months later, needing just over three minutes to dispatch Teruto Ishihara. Since then, he’s replicated the formula that helped propel Israel Adesanya into the spotlight and ultimately scored “The Last Stylebender” an interim title shot, fighting frequently and turning each appearance into another victory on his charge up the bantamweight ranks.

After registering wins over Jin Soo Son and Douglas Silva de Andrade to close out his rookie campaign, Yan kicked off his sophomore season in the UFC cage with a unanimous decision win over John Dodson in February, where he walked down the difficult-to-corner contender to earn a clean sweep of the scorecards, a fourth straight win in the UFC and his seventh consecutive victory overall.

This weekend at UFC 238 and with a few weeks to spare before reaching the one-year anniversary of his Octagon debut, Yan has the opportunity to match Adesanya’s run of “five wins in 12 months” and make his case for a title shot in a main card matchup against durable veteran Jimmie Rivera.

“I'm in the Top 10 of the division now and have the opportunity to enter the Top 5 after my next fight,” said Yan, who declared prior to his fight with Dodson that his goal for the year was to earn a place in the Top 5. “To accomplish this inside of one year is a big benefit for me and I'm very happy about it, but I don't concentrate on this too much because I don't think it's a big accomplishment.

“A truly big accomplishment and the ultimate goal for me is to win the UFC belt.”

While the division has never been as flush with talent as it is right now, it has also never been so wide open either, creating the opportunity for Yan to vault from No. 9 in the rankings to the top of the list of contenders with a dominant effort on Saturday’s bantamweight-heavy card.

In addition to Yan’s bout with Rivera, which serves as the fourth fight on the five-fight pay-per-view main card, this weekend’s return to “The Madhouse on Madison” also includes a preliminary card showdown between Aljamain Sterling and Pedro Munhoz, currently ranked Nos. 3 and 4 in the division, respectively, and is headlined by a clash for the division’s vacant championship belt between reigning flyweight titleholder Henry Cejudo and surging No. 1 contender Marlon Moraes.

As much as this weekend’s fight card is loaded from top to bottom, all eyes will be on the bantamweight division and Yan plans to make the most of his main card opportunity, while paying little mind to where his fellow contenders are positioned.

“Honestly, the fact that Sterling and Munhoz are fighting in the prelims doesn't mean much to me,” he said when asked about the placement of the two bantamweight contender tilts set to take place this weekend. “I don't really care about the placement of their fight on the card. I believe the UFC had their reasons to have me on the main card and them as a warm-up fight.

“I'm glad that I will be on the main card of such a big pay-per-view event,” added Yan, whose lone pay-per-view appearance to date came on the prelims at UFC 232 last December. “I think it's a big plus for me and for building my name in USA. I see only benefits in that and I hope from now on I will always fight only on the main card or in the main event.” 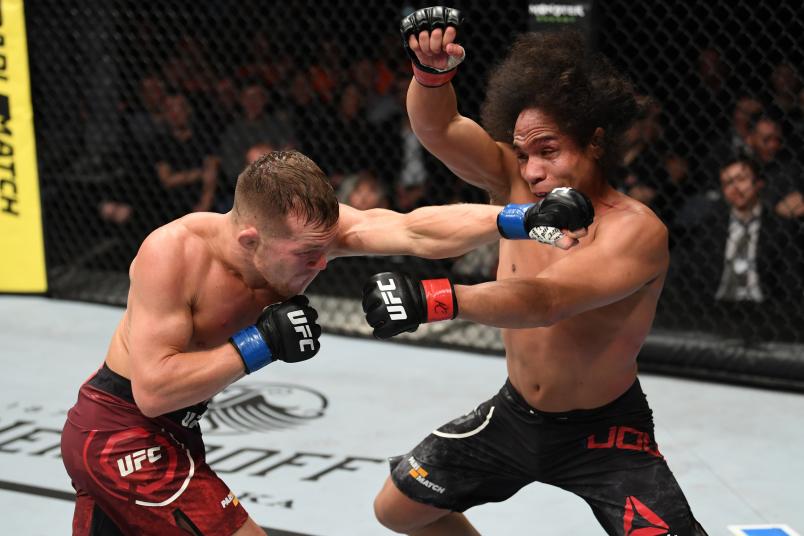 Depending on how things shake out on Saturday, it’s not inconceivable that a victorious Yan continues to follow the path blazed by Adesanya over the last 18 months to leapfrog the Sterling-Munhoz winner and anyone else trying to chart a course to title contention to land opposite whomever emerges as the newly minted bantamweight champion when the dust settles following UFC 238.

Rivera is a tough out who went eight years and 20 fights without a loss, including putting together his own 5-0 run inside the Octagon at the outset of his UFC career, before landing on the wrong side of the result in two of his last three outings.

Coming off a lackluster showing against Sterling in February, the Team Tiger Schulmann representative is chomping at the bit for a chance to get back into the win column and re-enter the title conversation while simultaneously slowing Yan’s roll.

But the surging upstart fighting out of Tiger Muay Thai isn’t overly impressed with what his opponent will bring to the table on Saturday and is fully confident that he’ll be able to secure a fifth straight victory this weekend in Chicago.

“To get the fifth straight win in UFC, I just have to be calm, collected and relaxed,” offered Yan. “I need to follow my game plan and do what I was preparing for that fight.

“I think Jimmie is a good opponent who has been competing for a long time and has a lot of experience, but judging by his past fights, he doesn't amaze me with the variety of his skills,” he added. “He is tough fighter, but nothing special. I believe everything will be okay.”

If everything goes according to plan and he dispatches Rivera on Saturday night, the talented rising star plans on putting his feet up and watching how the remaining bouts on the card play out, paying special attention to the night’s finale, hopeful that he’ll be the first man to challenge the winner for the bantamweight title later this year.

“After my fight, I will watch the fight between Cowboy and Ferguson, Valentina Shevchenko's title defense and obviously I won't miss the title fight in my division, Marlon Moraes versus Henry Cejudo,” said Yan. “These three fights are must-watch for me.

“After this win, I hope to fight for the belt against whoever will win between Cejudo and Moraes,” he added. “I want to face the champion and if opportunity presents itself, I will 100 percent agree to take it, without a doubt.”