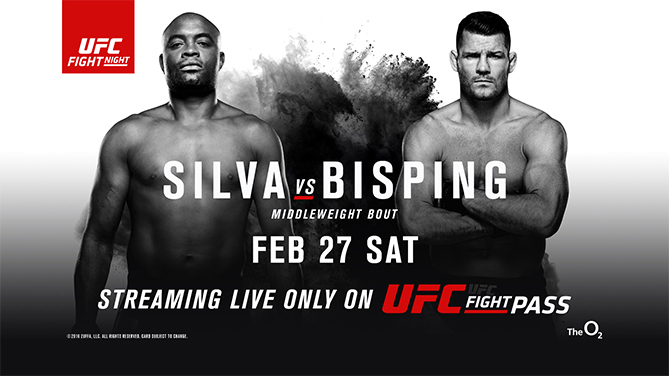 Anderson Silva has always been the betting favorite in the lead-up to his middleweight clash against Michael Bisping this Saturday at Fight Night London. The official UFC rankings finally agree.

Tuesday’s release of the latest rankings have Silva slotted ahead of Bisping for the first time since “The Spider” returned to the list three weeks ago. Silva, who returned at No. 10 among middleweights, now sits at No. 5 while Bisping drops to seventh.

There aren’t many updates in the aftermath of Sunday’s Fight Night Pittsburgh, which featured Donald Cerrone submitting Alex Oliveira in Cerrone’s welterweight debut. “Cowboy” remains off the 170-pound list and drops four spots to No. 9 in the lightweight ranks despite his first-round finish.

The other star of Fight Night Pittsburgh, Cody Garbrandt, has yet to crack the bantamweight list. Garbrandt knocked out Augusto Mendes in Round 1 and is still undefeated at 8-0 (3-0 in UFC).

Co-main event winner Derek Brunson only climbs one spot to No. 12 in the 185-pound ranks after earning his third consecutive first-round knockout victory. Lauren Murphy’s win in the FIGHT PASS prelims over Kelly Faszholz earns her an appearance on the women’s bantamweight list for the first time, coming in at No. 14.