Rountree Is Proof Not To Rush Judgement

“Yes. I’ll stop you there. I’m stopping you now. Yes,” interjects Rountree long before hearing the entire question. “Yes — the media and everybody rushes us too damn much."
By E. Spencer Kyte • Apr. 11, 2019

When did it become unacceptable for fighters to struggle at the outset of their careers?

When did we reach a point where one or two wins can make you “The Next Big Thing” and one or two setbacks serve as proof that you’re never going to amount to much inside the cage?

In a sport where some of the most revered fighters of all time have seven, eight, nine or more defeats on their resume, it seems like the days of allowing athletes to learn, grow, and develop during the early stages of their careers have been replaced by a system where everything they are and everything they could become is re-evaluated and revised with each passing fight.

Despite everyone agreeing that you learn more from your losses than your wins, few athletes are given space to work through those “teachable moments” without being slapped down on social media or discarded to the “unimportant” pile by those who follow the sport. 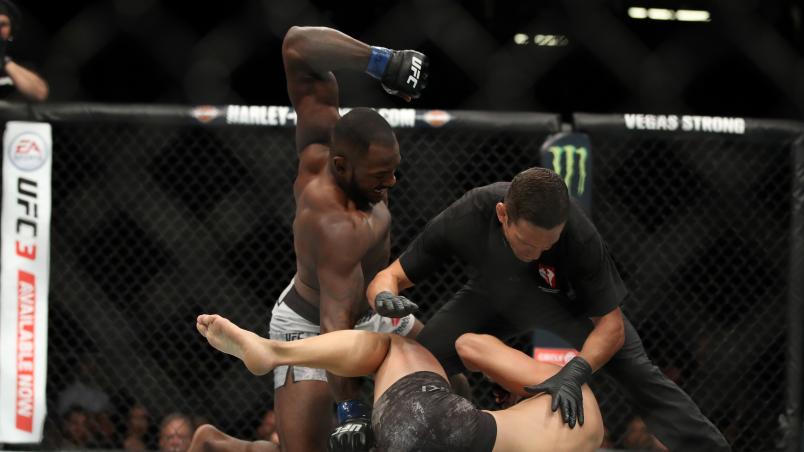 You see it with each new arrival from the regional circuit who steamrolled his or her way through the competition, building momentum and a little bit of buzz as they worked their way to the biggest stage in the sport. Before they step into the cage, they’re the one you’ve got to watch — someone with the potential to be something special down the line — but the minute things go south, the same collection of descriptors and denouncements start making the rounds.

“Not as good as everyone said.”

Of course, an impressive rebound win could very well be all it takes to quiet all those criticisms and get those positive proclamations flowing once more, but only until the next loss.

Khalil Rountree Jr. knows the cycle all too well.

A highly-touted prospect through his amateur career and into his early fights on the regional circuit, the UFC light heavyweight has had all the different labels you can imagine affixed to him since arriving in the UFC via season 23 of The Ultimate Fighter a little under three years ago.

“Yes. I’ll stop you there. I’m stopping you now. Yes,” interjects Rountree long before hearing the entire question. “Yes — the media and everybody rushes us too damn much.

“I got onto the Ultimate Fighter when I was 4-0 and my whole career has basically been spent in the UFC, for the most part. Sometimes I’ll knock a guy out and everyone will be like, ‘Oh my God — this guy is the next big thing!’ Then people watch my next fight and I go out there, fight and I lose and it’s, ‘This guy sucks! He’s not what we thought!’”

He laughs, but what he’s saying is no joke. 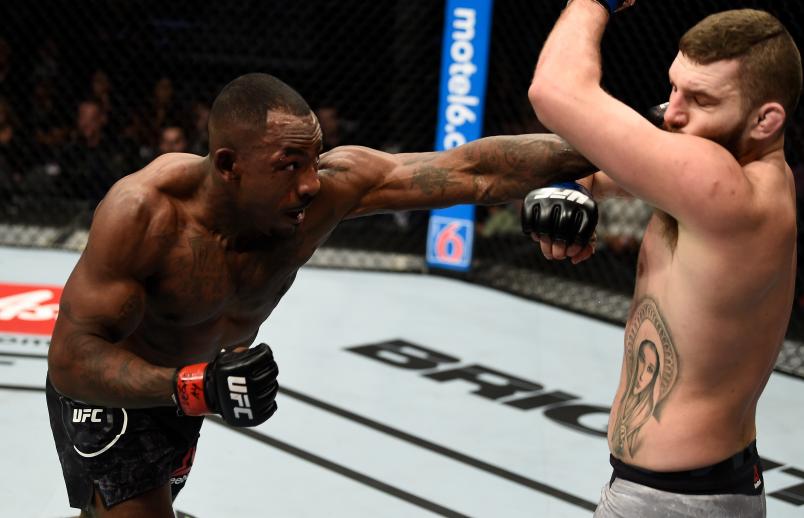 Rountree is 12 fights into his professional mixed martial arts career and carries a 8-3 record with one no contest result into his matchup with Eryk Anders this weekend on the main card of Saturday’s UFC 236 pay-per-view from State Farm Arena in Atlanta, Georgia.

After working his way to the light heavyweight finals on the long-running reality TV competition, he was out-wrestled and out-worked by Andrew Sanchez in the finale. When he dropped his sophomore appearance in the Octagon as well, many fans who were high on dangerous striker jumped off the bandwagon and wrote him off as a bust.

Two straight first-round stoppage wins followed and the hype returned, only to dissipate once more when Rountree came out flat and dropped a decision to promotional newcomer Michal Oleksiejczuk. The loss was later overturned and deemed a no contest when the Polish fighter tested positive for a banned substance, but the loss still cooled Rountree Jr.’s momentum and prompted more people to question how far he would be able to go in this sport.

A blistering knockout win over kickboxing legend Gokhan Saki made seats on the bandwagon hard to come by once again, but then being on the receiving end of a similarly quick, similarly vicious finish prompted another exodus and another round of wondering if the now 29-year-old once tabbed as a future contender would be able to stick around long term in the 205-pound ranks.

“Everybody needs to take a step back and enjoy the fights and stop looking for the next Bruce Lee,” he says. “Just enjoy us for how we are.

“Same thing for Johnny Walker, right?” he says, referencing the surging Brazilian who beat Rountree in his promotional debut and has since added two more lightning quick first-round stoppage wins to his resume emerge as the latest “Man of the Moment” in the MMA world. “Guy’s phenomenal — he’s a beast, he’s super-tall, he knocked me out, he knocked Misha Cirkunov out and he’s on a streak, but I think he’s about to have his fourth fight in the UFC and people are already like, ‘This is the guy to take out Jon Jones.’”

While he understands the excitement that accompanies someone like Walker going on an impressive run of finishes, Rountree also acknowledges the importance of allowing young and inexperienced fighters the opportunity to gain seasoning and develop before throwing them into the deep end of the talent pool.

“The kid has potential,” he says of Walker. “He has the power, he has the size, he has everything and while I’m sure he would like a title fight, let the guy live. Let him have some more fights and experience what it’s like to develop and grow as a fighter. Don’t just throw him at Jon Jones.”

Some are sure to call it sour grapes and chalk it all up as the reflections of a competitor who has to this point failed to find consistency inside the Octagon, but the value of what Rountree is saying is reflected in the careers of two of the fighters competing for championship gold this weekend in Atlanta.

Kelvin Gastelum came off The Ultimate Fighter as well, winning the middleweight competition in season 17. While he maintained his momentum coming off the show, a couple of setbacks combined with his missing weight a handful of times had people questioning whether Gastelum would ever realize his full potential.

Saturday night, he takes on Israel Adesanya for the interim middleweight title in the co-main event.

Meanwhile, Max Holloway started his UFC career with a 3-3 record, dropping back-to-back fights after putting together a three-fight winning streak following a loss in his promotional debut. He hasn’t lost since, rattling off 13 consecutive victories en route to winning and defending the featherweight title and establishing himself as one of the best pound-for-pound fighters in the sport.

He headlines in a battle with Dustin Poirier for the interim lightweight belt.

The last three years have been a massive learning experience for Rountree — both inside and outside of the cage — and as he readies to return to action this weekend against Anders, he’s focused on applying some of the lessons he’s picked up along the way in order to deliver the best performance he is capable of on Saturday night.

“I know this is a really big fight, I know that Anders is good and all of these things, but I don’t really feel as much pressure as I have in the past,” says the dangerous striker, who admits that he’s battled bouts of depression over the course of his UFC career.

“I definitely went through some times where I went through what we all kind of go through because one day, the media and social media and all that stuff is very hyped, but then I lose a fight and I get trash talked online and all these things. Obviously we’re taught to ignore that stuff, but I’m still human.”

But his time in Thailand helped Rountree see things in a different light and reconsider the weight and importance that is attached to the outcome of every fight.

“There is a fight every night and some guys fight two times in one night in completely different events, take three days to recover and then they’re back at it again,” he explains. “I met a guy who was 24 years old with 450 fights and at that point, it’s not even, ‘What’s your record?’ it’s ‘how many fights do you have?’

That’s not to say he doesn’t care about wins and losses — he does, but he’s not letting the fear of losing and how that could impact his place on the UFC roster dictate what he does inside the Octagon any longer.

“For me as a mixed martial artist, I have to look at it like, ‘Yes, I’m in the UFC and I love it and it’s the best thing in the world for me right now, but it’s not the end of the world for me if that isn’t the case anymore,’ so I’ve got to go out there and do what the hell I do,” he explains. “Not for the fans or the recognition, but just for myself so that after this fight, I can know that whatever I’ve been working on is great, embrace it, keep learning and keep fighting.

“If the worst-case scenario (happens and I eventually get cut from the UFC), I have to not look at it as, ‘Ah man, I’m not in the UFC anymore,’” he adds. “I’m going to still go out and do what I do until I’ve reached that point where I’ve got a ton of fights and I’ve learned so much from this MMA journey as a whole.”

Which is a big part of why he’s excited about the matchup with Anders this weekend.

“The thing that excites me the most is just my willingness to open up and be myself — to not be afraid of an outcome or anything like that,” Rountree says of his pairing with the former University of Alabama linebacker, who has also experienced the major shifts in perceptions and opinions about his future in the sport over the course of his first six Octagon appearances. “Just go out there and fight to my full potential.

“The fact that it is Eryk is awesome because it’s a tough matchup so it’s like, ‘I’m taking a chance right here.’ I’m ready to put everything together in this fight and just really showcase my entire arsenal and I get to do it against Eryk, a guy that’s tough and tough to put away, which means I have to dig deeper and reach further into the arsenal and that helps my growth.”

As for how he sees his return this weekend playing out, Rountree says he wants to once again cause people to alter their expectations of him.

“New,” he says, when asked how he sees Saturday’s bout with Anders playing out. “I think a lot of people have heavy expectations about what they’re going to see from me and while it’s not that I want to break those expectations, I want to bring something new.”