Rodriguez Comes Out On Top Of An Instant Classic 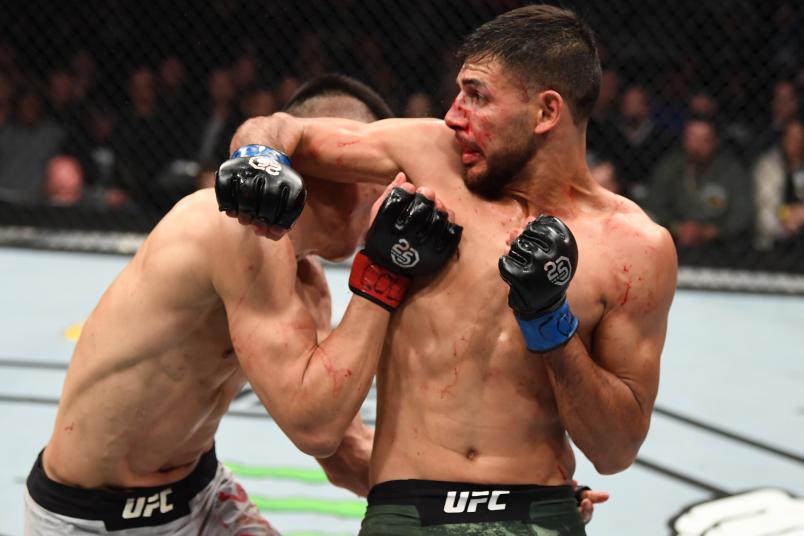 A former title challenger and divisional stalwart dating back to the WEC days, Chan Sung Jung looked primed to resume his run as a tough out and dangerous matchup for anyone seeking entry into the upper tier of the 145-pound weight class when he returned from a 1,281-day absence to register a first-round knockout win over Dennis Bermudez on Super Bowl Saturday in Houston.

But before he could fight again, “The Korean Zombie” was forced to the sidelines once more, felled by a knee injury, leaving his victory over Bermudez to stand alone as his one and only trip into the Octagon in the five years since he fought Jose Aldo for the featherweight title at UFC 163.

Three months later and 240 miles north from the site of Jung’s emphatic return, Yair Rodriguez experienced his first setback on the big stage.

Boasting a 6-0 record in the Octagon, an eight-fight winning streak overall and positioned as a potential breakout star heading into his showdown with Frankie Edgar at UFC 211, the Mexican upstart’s ascent was brought to a sharp, sudden halt in Dallas, as “The Answer” proved to have all the right answers in his battle with Rodriguez.

Saturday night, Jung and Rodriguez ended their lengthy absences together, with the latter filling in for an injured Edgar against the South Korean standout in a bout that many viewed as a potential Fight of the Year contender.

It was ‘speed vs. pressure’ to start, as Rodriguez flicked out quick, forceful low kicks and snapping punches while Jung relentlessly marched forward, countering with range punches of his own, but looking to close the distance and force Rodriguez to fight moving backwards.

The second began with Jung initiating the clinch and searching for a takedown, but came to a momentary halt after Rodriguez connected with an inadvertent low blow. Restarting in space, the young Mexican fighter resumed attacking with kicks, while Jung looked to land power shots and pressed forward into the clinch, eating a flush spinning back elbow on the way in.

In the final minute of the frame, the bout started trending towards its Fight of the Year potential, with both men getting more aggressive on the feet and Rodriguez opening up a pair of small cuts that left “The Korean Zombie” dripping blood.

A touch of gloves kicked off the middle stanza before Rodriguez opened up with kicks to the legs, the body and the head. True to his name, however, Jung never stopped coming forward, connecting with hard punches that forced Rodriguez to retreat and reset. With just over a minute left in the frame, Rodriguez connected with a head kick as Jung was coming forward, but the South Korean veteran walked through it, dumping the TUF Latin America winner to the canvas momentarily.

As they hit the championship rounds, Jung kicked off the fourth by landing a clean right uppercut, the accumulated effects of 15-plus-minutes of fighting starting to show on Rodriguez’s face. Just passed the midway point of the round, Jung sent Rodriguez stumbling backward with a clean right hand, only to be met with a jumping knee attempt as he looked to crash forward and capitalize.

But Rodriguez avoided any follow-up blows and quickly regained his composure, the two battered warriors continue to trade shots in the center of the Octagon throughout the remainder of the frame, setting up a fifth round for all the marbles.

With the Pepsi Center crowd on their feet to begin the final period, the featherweights embraced before getting back to punching one another in the face.

When Jung would land a punch, Rodriguez would counter with a spinning attack or a kick of his own, neither man taking a clear advantage through the opening two minutes of the round. Just prior to the midway point, Rodriguez dropped down for a takedown, but Jung stuffed it, handing his foe a right hand for his efforts. A moment later, Rodriguez replied with one of his own before the two athletes took a moment, called on the crowd to get loud and settled in for a frantic race to the finish.

As Jung landed a right, Rodriguez answered with a spinning backfist, neither man willing to cede ground or stop attacking. With blood dripping from both their faces, they stood in the center of the cage with 15 seconds remaining on the clock, touched gloves and looked to throw down.

With seconds remaining, Rodriguez sent Jung crashing to the canvas in a heap after connecting with an incredible up elbow that landed flush as the South Korean standout came racing forward, halting the fight right before the final horn and establishing “El Pantera” as the clubhouse leader in the Knockout of the Year race.

This was every bit as exhilarating as expected and re-established Rodriguez as a dynamic, young factor in the featherweight division.