Rivas returns to Octagon after bout with cancer

It should have been the best time of Diego Rivas’ life. Chile’s lone representative on the UFC roster, Rivas had just scored a highlight reel flying knee knockout of Noad Lahat in February 2016 that earned him a Performance of the Night bonus and lifted his pro MMA record to 7-0.

But a month after the fight, a visit to the doctor to check out an injured knee turned up something a lot worse, as he was diagnosed with testicular cancer. At 24 years old, Rivas was handed news that was the equivalent of a death sentence.

“It’s very hard to put into words,” he said of his reaction to the cancer diagnosis. “I was shocked, obviously. Really, I had no immediate reaction. After the news settled in with me, I thought that my career was over. I thought nothing else was possible after my diagnosis, especially competing as an athlete. Honestly, I thought I was going to die.”

Honestly, I thought I was going to die.”

MORE FROM FIGHT NIGHT MEXICO CITY: Fantasy Preview | Pettis to make growing pains thing of past | Three fighters On the Rise | Moreno loves everything about the Octagon

Rivas wasn’t going to stop fighting, though. He underwent emergency surgery, then chemotherapy and, eventually, he was given a clean bill of health. Rivas’ pro record won’t show it, but in his mind, he was now 8-0.

“When the doctor told me I was healthy, my mindset shifted,” he said. “All I could think about, athletically, was that I was coming back stronger, despite the illness and diagnosis. There was no doubt in my mind that I would fight again after that.”

On Saturday, Rivas returns to active duty to face Jose Quinonez. It’s more than a fight for the “Pit Bull,” who knows that every time he steps into the Octagon, no one standing across from him will be a tougher foe than the one he just vanquished.

“I have so much respect for anyone who fights for the UFC, but no fighter in the world will give me a bigger challenge than the disease I overcame,” he said. “I’ve always been a confident fighter, but this diagnosis only strengthened my will.”

That makes Rivas a very dangerous young man in the bantamweight division, as well as an inspiration for the nation that he represents. 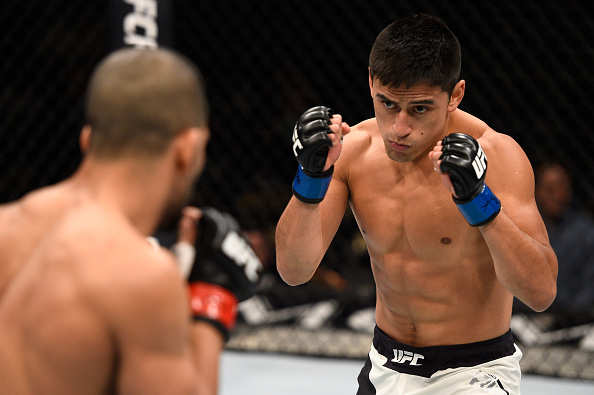 “Everyone in Chile is very supportive of me,” he said. “I get calls all the time and lots of messages on social media. That is very inspiring to me. I can’t wait for the fight so I can give them something more to cheer about and get behind. MMA is not very popular in Chile at this time, but the level of popularity is building. I’m very happy and proud to play a role in that growth; that’s something that inspires me too.”

To get to the level he needs to be at to one day challenge for a world title, Rivas has had to sacrifice, which means leaving Chile to live in southern California, where he trains with Team Oyama.

“Working with Team Oyama has been great,” he said. “The coaching and level of training partners here is excellent. Everyone is very welcoming and helpful. It’s one of the best places I’ve trained at, if not the best. I love it in America. Everyone has made me feel right at home. I miss Chile and everyone there, of course, but I’m happy here too.”

Happy is the operative word for Diego Rivas these days. He’s cancer-free, unbeaten and has a big fight coming up. He’s even going to be a father in November. So what should his son or daughter know about their dad?

“I would like them to know that their dad is a hard worker who never gives up, no matter what’s in my way,’ Rivas said. “Their dad is someone who always strives to be their best, inside and outside of the sport.”