Reasons to watch UFC 218 on Pay Per View

UFC 218: Holloway vs. Aldo 2 goes down Saturday night on Pay-Per-View from Detroit, Michigan and is absolutely stacked.
The headlining title rematch between Max Holloway and legend Jose Aldo takes top billing, but below that are four fights packed with title implications in four different weight classes.
These are your reasons to watch UFC 218.
Can “Blessed” maintain the streak?
Only Anderson Silva, Jon Jones, Demetrious Johnson and Georges St-Pierre have won more consecutive fights in the UFC than Holloway. The Hawaiian superstar has been a wrecking machine at 145 pounds and cemented his greatness with a win over Aldo back in June at UFC 212 in Aldo’s home country of Brazil.
A win in the rematch will tie Holloway with GSP, just four wins away from Silva’s iconic win streak. Holloway’s evolution has been incredible to watch. He debuted in the UFC at 20 years old and is now set to make his 17th walk to the Octagon.

Can Aldo conjure up some more greatness?
Speaking of win streaks, Aldo’s run of 15 straight victories between his time in WEC and UFC is one of the great accomplishments in the sport’s history.
Aldo now comes into a title fight as the challenger for the first time in his career with a renewed focus and a desperation to regain his crown. Aldo believes he’s learned from the first fight against Holloway and has the skillset to adjust and have extended success in this fight.
The scariest fighter on the planet is in action
Don’t believe me? Go watch “Rising Stars: Francis Ngannou” and just marvel at the power, speed and sheer force with which this heavyweight phenom inflicts damage.
Ngannou is 5-0 in the UFC and all of those wins have come by finish. He’s only been training mixed martial arts for four years and seems to reach new levels of dominance with each performance. Against heavyweight combat sports icon Alistair Overeem, “The Predator” now has the elite-level competition that will offer a true measuring stick for his skills. Saturday will showcase whether Ngannou is ready for heavyweight king Stipe Miocic.
Alvarez-Gaethje a glorious matchup of pure aggression
If you haven’t seen Justin Gaethje yet start your search engines. Appropriately named “The Highlight,” Gaethje provided no

shortage of memorable moments in his UFC debut earlier this year. Taking on tough veteran Michael Johnson in July, Gaethje landed 104 significant strikes in just under 10 minutes before finishing “The Menace” in what many are hailing as Fight of the Year.
The only thing better than getting our second look at Gaethje this year is his opponent at UFC 218: Eddie Alvarez. “The Underground King” told MMA Fighting’s Ariel Helwani that the winner of this fight will be crowned “UFC’s most violent man.” With the former lightweight champion’s pension for slinging bombs, this could be another FOTY candidate.
RELATED: UFC 218 Fight By Fight Preview | Order The UFC 218 Pay-Per-View | UFC 218 Tickets
Mighty prize on the line?
So it seems like a super fight between champions Demetrious Johnson and TJ Dillashaw could be on the docket for 2018, but flyweights Henry Cejudo and Sergio Pettis could throw a wrench in those plans if either is able to put on an impressive showing in their matchup.
Pettis and Cejudo have both been flagged as potential road blocks for the champ while ascending the flyweight ranks. Cejudo fell short in his bid against Johnson in 2016 and Pettis hasn’t had a shot yet. But both are seemingly at their peak now and meet with the highest of stakes. Pettis has won four in a row and knocked off surging prospect Brandon Moreno last time out. Cejudo’s second-round knockout against former title challenger Wilson Reis was the pinnacle of his career and he continues to look better each time out.
Big opportunity for No. 5 and 6 in strawweight showcase
Fan favorite Michelle Waterson (No. 6) and No. 5-ranked Tecia Torres have at least one thing in common: they both have 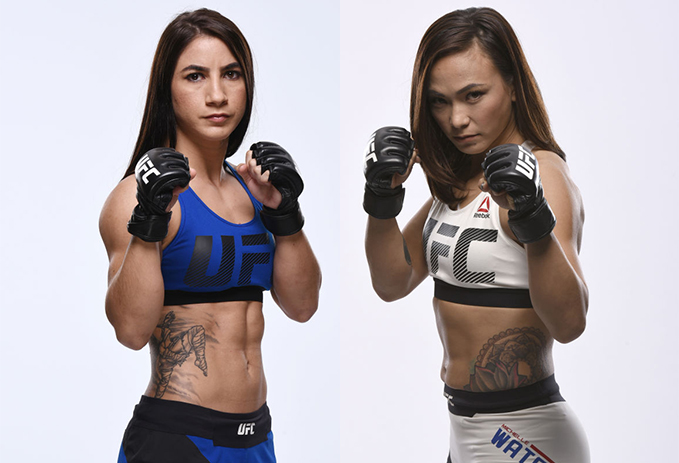 lost to current champ Rose Namajunas.
The road back to another fight with “Thug Rose” begins in Detroit. Torres has won five of six in the UFC with her only loss coming to Namajunas. “The Karate Hottie” is in the same boat, as her only loss of an otherwise perfect UFC mark of 4-1 came against the champ.
Look for this one to be a striking display and with valuable real estate in the division on the line look for both to go for the finish.
Matt Parrino is a digital producer and writer for UFC.com. Follow him on Twitter @MattParrino