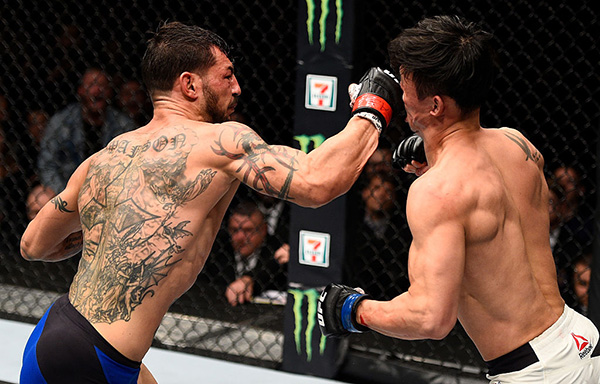 Cub Swanson already won. Before he steps into the Octagon for his UFC Fresno main event against Brian Ortega on Saturday, the Palm Springs native can easily sit back and say that he made it a lot further in his career and his life than many thought he would.

He’s a father now, one of the top featherweights in the world, and perhaps one more victory away from a title shot. All at 34 years old, an age that he’s been thinking about for a while.

“My dad passed away when I was three months old,” he explains. “So I ended up bouncing around family, me and my brothers, and I kind of grew up in the chaos. I believe at my dad’s funeral, my mom’s house got robbed, so there’s always been chaos in my life. And my dad was the same age I am right now when he passed away.”

Swanson pauses, always thoughtful with what he says and how he says it. Just like his fighting style, there are no wasted moments.

“So this year’s been a very reflective time for me of, man, if I were in my dad’s shoes and if everything was taken away right now, look at my life compared to his and look at what I’ve accomplished.”

He can be proud and happy with those career accomplishments, and his personal life got a jolt of joy in August when he and his girlfriend Kenda Perez welcomed their daughter, Royal Rae Swanson, into the world. As a father of a daughter myself, I ask him, only half-jokingly, if being a dad is going to make “Killer Cub” soft. He laughs, but just like he’s made several adjustments throughout his career, he’s already made this one as well.

“You go through different stages in your career,” he said. “At first, I was an angry young kid trying to prove that I could be great at something. And once I got to a certain point, that changes because you’ve proved that. And then you evolve as a human, so your reasons for fighting – if you have a long career – change and you have to adapt to that. Then it was all about securing my future and just being the best version of myself and being proud of what I accomplished. I had been working on that for years, and with my daughter coming and a lot of my goals outside of fighting coming true, it made me more hungry and gave me so much more energy. And with me being such an emotional athlete, having a daughter just brings more emotion into it for me.”

There is no shortage of emotion coming into one of the best featherweight matchups of the year. Swanson was hoping to get a short notice crack at 145-pound boss Max Holloway when Frankie Edgar was forced out of the UFC 218 main event, but that fight went to Jose Aldo. Now the No. 4-ranked Swanson faces the No. 6-ranked Ortega, an unbeaten young gun eager to put the veteran on his victims’ list.

“I think I’ve gotten mature enough to understand that this can be taken away at any moment with one slip-up,” he said. “It keeps me sharp and it motivates me to not let anyone take it away. This fight in particular, usually you’re sitting pretty – a four-fight win streak, you’re expecting a guy ahead of you and you get a guy behind you in the rankings. You think things are going good, but it’s those moments where it can all get taken away very easily. That motivates me and keeps me sharp.”

He lost that for a while, dropping back-to-back fights to Edgar and Holloway in 2014-15 that snapped a six-fight winning streak and had him asking questions he never had before as he began paying attention more to what was happening outside the Octagon in the fight game than in it.

“When I had a little dip in my career was when I let it get to me and the passion kind of went away,” he said. “Everybody knows I’m passionate when I fight and if that passion’s not there, then I have a lackluster performance.”

So is the passion back?

“Oh yeah,” he laughs. “I think it’s shown in my fights ever since the Holloway fight. I took a year off and just got back to loving the sport and focusing on the performance and not focusing on everything outside. I got with a sports psychologist and we talked for a long time and he constantly reminded me of what’s really important when I fight. And that’s having the best performance and trying to be the best version of yourself. I’m always trying to be better than the last guy that went out there. That’s enough motivation.”

The “last guy” defeated Artem Lobov in April, making it four consecutive wins and two consecutive Fight of the Night bonuses. Ortega has a pair of FOTN wins as well, setting the stage for something special in Fresno. But Swanson may throw a wrench in the works, recalling his first big step-up fight against Jens Pulver in 2007. 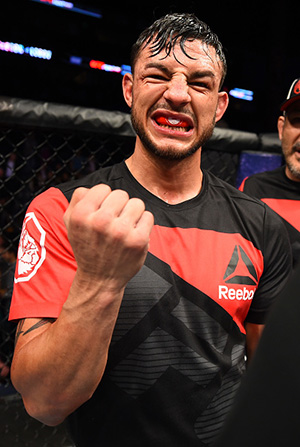 “I know what it’s like to step up in competition and all of a sudden having so much attention on you and going, ‘Whoa, I’m ready for this,’” said Swanson, who was submitted in 35 seconds by the former UFC lightweight champion, snapping an 11-fight winning streak. “And you’re telling yourself that, but maybe you’re not. That’s always there, and I know that he (Ortega) is gonna be feeling that. And it’s my obligation, as a veteran, to exploit that. And I’m excited for the opportunity.”

Yeah, Cub Swanson isn’t getting soft. On fight night, all the same feelings come back, the ones that drove him when he had nothing and that still drive him as he sits at the top of the sport.

“When you store up all those emotions and that inner demon, it comes out at some point,” he said. “So fighting, for me, has always become my outlet and my chance to become that killer and go ahead and put on a show and be ferocious and let everybody look. And once it’s over, the more mean I am in the fight, the softer I am at home. So when I get it all out at my opponent, I get to come home and spend time with my girl and my daughter and have Christmas.”

He chuckles, knowing that becoming Killer Cub and then transforming back into dad isn’t the easiest thing to understand for those not living that life. But that’s okay, because he knows it and understands it, and finally, at 34, he’s enjoying it.

“I’m just enjoying the moment,” he said. “My whole 20s pretty much, I was trying to be great and I don’t even remember most of it because it was boring. I just trained, trained, trained. I didn’t do anything fun. I was so worried that I would get sucked back into being average. So ever since then I’ve been able to focus on all this stuff and enjoy the moment.”

Saturday is the next moment to take in, and just before he makes the walk, he’ll refer back to something his sports psychologist told him.

“This could be the greatest night of your life. You just gotta go out there and make it happen.”