Death, taxes, and brutal truth from Brandon Royval. It’s nice to know we can still count on some things.

“2021 sucked, man,” he said when asked to break down the last 12 months. “It was probably one of the worst years in fighting that I've ever had, honestly. I was injured all 2021, and then I lost the only fight that I had.”

Granted, that fight was against No.3-ranked flyweight contender Alexandre Pantoja in August, and as he approaches his Saturday return against Rogerio Bontorin, Royval remains in the Top Five at 125 pounds, but yeah, we get the point, And as he waited to get the call for this weekend’s bout, all he wanted to do was fight.

"The theme of my life has just been rushing through things."@BrandonRoyval has slowed things down and found his groove heading into #UFCVegas46 🔊⬆️ pic.twitter.com/TYY0cbHqW1

“The whole next week after (the Pantoja fight), I didn't miss a day,” he said. “It's weird because I'm one of the top dogs in the division right now, and all my fights are getting booked four, five months out, and it's a lot of time to just be waiting. Every fight's really good and important for divisional numbers, but I was like, ‘Can you guys just throw me a short notice dude that's not in the top five right now, so I can just get this taste out of my mouth?’”

It’s a predicament only understood by the elite in the sport, fighters who have made it close enough to the top that a random bout against an unranked foe just doesn’t make sense. Royval, still only four fights into a UFC stint that began in 2020, gets it, but he also knows that the more he fights in the Octagon, the better and more confident he’ll feel.

“I want more experience under the bright lights,” said the 29-year-old. “And I haven't fought in front of a crowd (in the UFC), so I need all this experience before I end up fighting for a belt the first time in front of a crowd. But I know I can get all this done. I know I can get to the top of this division. You only get so many years of fighting and I need to make every one of these years count to its fullest, and I have to go out there and prove it.”

Luckily, the Coloradan has other ways of getting the experience he wants. No, it’s not fighting in front of a crowd back home, but he does have a host of UFC veterans in the Factory X gym that have been there and done that in the sport, and he doesn’t hesitate to ask them all the questions he has about competing at the top level.

“I would be dumb not to,” Royval said. “(Dustin) Jacoby is the most experienced person on our team as far as being that guy in a big arena at all times and being in these big fights and big situations and just being the calmest. I get a really good chance to pick his brain, and he's one of the more calm, cool, collected people on the team. And you've seen me fight - I'm the furthest thing from calm, cool and collected. (Laughs) I try to keep it cool out there, but calm is not really my forte.”

Calm may not be, but his frenetic style has certainly played a big part in his success, which includes Fight of the Night submission wins over Tim Elliott and Kai Kara-France in his first two UFC outings. After those fights, Royval was possibly a win over Brandon Moreno away from a title shot, but a shoulder injury led to defeat against “The Assassin Baby,” who went on to a pair of fights with Deiveson Figueiredo, the second resulting in Moreno becoming Mexico’s first UFC champ. Then came the loss to Pantoja and Royval hasn’t fallen off the map, but he does have to find a balance in his attack, and another teammate, Vinc Pichel, has been a good example of what to do to find it. 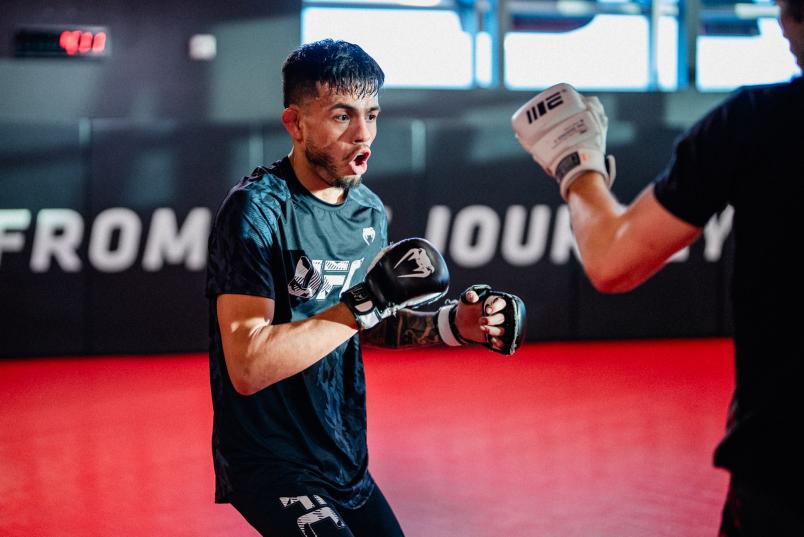 “Vinc did this thing in his last fight where he slipped, he walked back to his corner, wiped his feet on the water that they put on there so he couldn't slip anymore and get better traction,” laughs Royval. “And he did it all in the middle of a fight. I don't think I could ever be that cool during a fight. I thrive in chaos too, so I think a little bit of what I do when I fight is that I fight a little scared and I do a lot better when s**t's going crazy, and I think I've always kind of thrived in that situation a little bit more, so I think I have to create it constantly. It's a little bit of how we handle chaos - a little bit is that I need to take from him, but I also have to be me, too. It's the whole yin and yang thing. I need to be a little bit cooler, but I can't lose sight of what got me to the race.”

What got him there is what may need to be reigned in slightly if he wants to wear flyweight gold in the near future. That kind of change would be tough to come to grips with for some, but Royval understands it completely.

“With everything, there's a classic Greek mythology story - what makes you great is always gonna be your downfall too, and I think that's what led me into losing that Pantoja fight,” he said. “It's one of the many reasons why I lost to Pantoja, but I think the main reason is that I was being a little chaotic and being a little too crazy on my feet and I stepped too hard into a punch. But I think fighting and the eastern philosophy of yin and yang have always gone hand in hand with me. I can't fight too calm, I can't fight too angry, and if I fight too much with emotion, that's gonna be what buries me, but if I fight too calm, I felt a little too flatfooted going into fights because of how calm I felt leading up to it. I have to ride that middle wave, no matter what, and I'm not the best at getting myself there. (Laughs) Coach Marc (Montoya) does a great job at reeling me in. He's one of the better people at doing that, but this is something I need to master with more experience.” 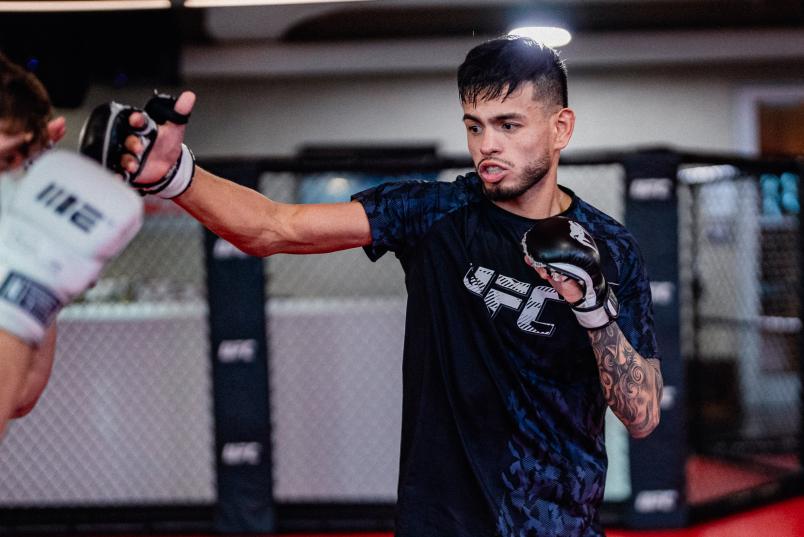 That struggle is obviously on Royval’s mind, and he chuckles when admitting that taking time off to relax is not in his DNA. So it’s not surprising that despite all the talk of getting more experience, he is all-in if the UFC needs a backup fighter to show up for next weekend’s UFC 270 bout between Moreno and Figueiredo.

“Oh, I already had a full-on conversation about it,” he said. “I'm planning on staying around that whole entire week.”

I guess Mr. Royval is ready after all.

“I'm ready for anything and everything right now,” he said. “I'm not saying no to any of these opportunities that are ahead of me. I want to make something big happen this year and I want to make it happen for my team and for everything. I worked my ass off for this and I think I can go accomplish it. I want to step up until I'm at the top.”