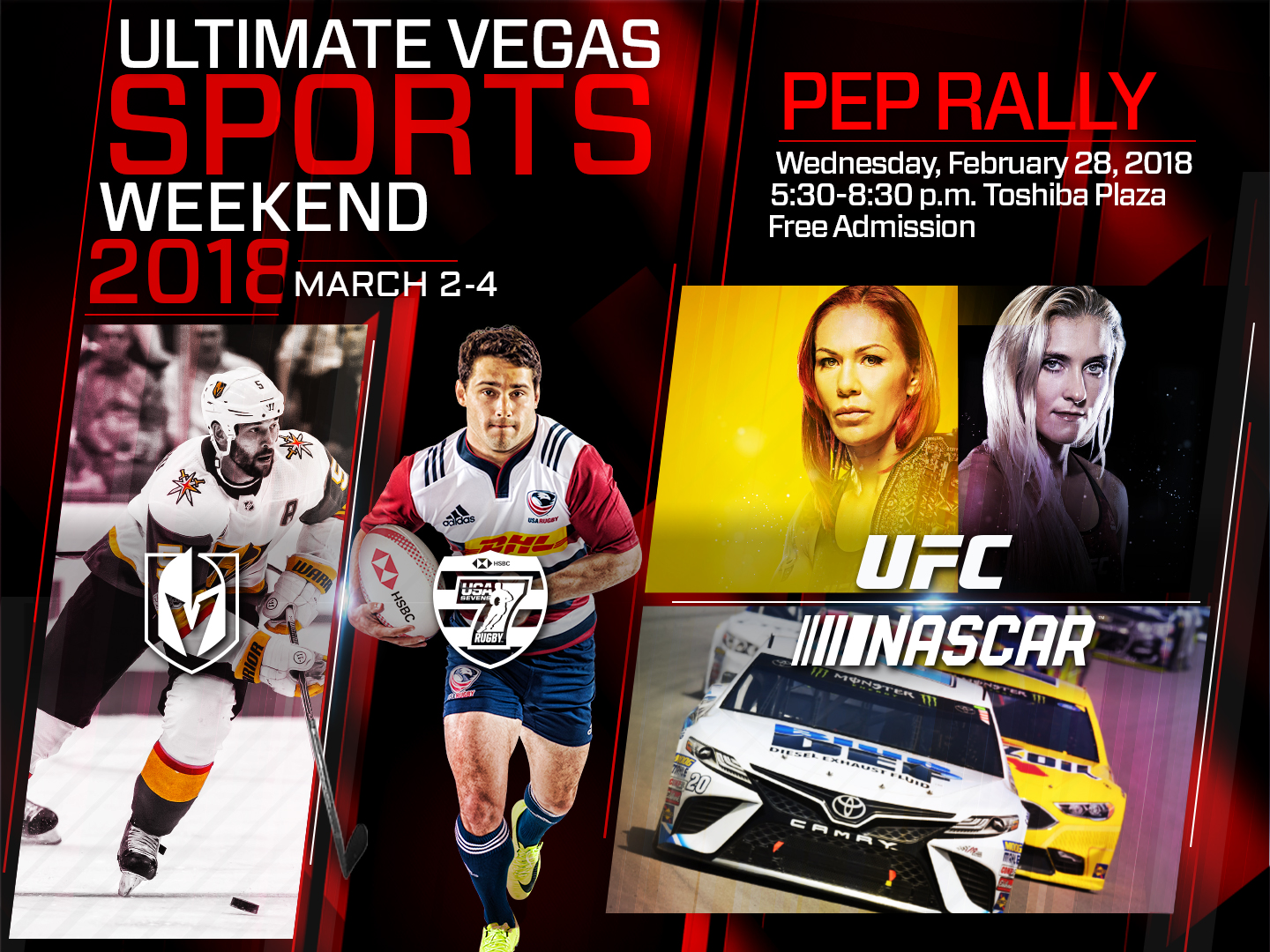 LAS VEGAS – Not content being just the Entertainment Capital of the World, Las Vegas is conquering the world of sports like no other city could dream of doing. The Ultimate Vegas Sports Weekend will show the sports world that Las Vegas is second to none when it comes to hosting events and attracting fans.

From March 2 – 4, Las Vegas will feature four major sporting events across a variety of fan disciplines when NASCAR, USA Sevens Rugby, the Vegas Golden Knights and UFC all take the stage. Fans will have action overload every day and the unparalleled experience of Las Vegas every night. For more information on the Ultimate Sports Weekend and tickets to all events, visit www.visitlasvegas.com/sports.

“When it comes to hosting events, Las Vegas has no equal. For sports fans, the Ultimate Sports Weekend will be an experience they couldn’t have anywhere else and one they will never forget,” said Rossi Ralenkotter, CEO of the Las Vegas Convention and Visitors Authority.

To kick off this unprecedented weekend of action, the destination and MGM Resorts International will host a pep rally on Wednesday, February 28, from 5:30 – 8:30 p.m.., at the Toshiba Plaza in front of the T-Mobile Arena. Stars from all four of the sports will join community leaders, mascots and more to celebrate the greatest weekend in sports. The pep rally will feature interactive games and events and prize drawings, including tickets to events.

WHAT: The Las Vegas Convention and Visitors Authority (LVCVA) is partnering with MGM Resorts International, NASCAR, USA Sevens Rugby, UFC®, and the Vegas Golden Knights to host a fan pep rally. The event will feature athletes from all four sports, interactive games, mascots, food and beverage, and more. The event is free and open to the public.

WHERE: Toshiba Plaza at T-Mobile Arena

INFO: The pep rally will begin at 5:30 p.m. with music by Michael Johnson and the A-List Band and interactive games for fans, featuring mascots, the Golden Knights’ Knight Line by Drum Bots, Las Vegas showgirls, and more. The program, featuring athletes and personalities from all four sports, will begin at 6:30 p.m. on the Toshiba Plaza stage. The program is scheduled for one hour followed by the return of the band and interactive games. Prize packages will be raffled off by each sport during their segment.

The Las Vegas Convention and Visitors Authority (LVCVA) is charged with marketing Southern Nevada as a tourism and convention destination worldwide, and also with operating the Las Vegas Convention Center. With nearly 150,000 hotel rooms in Las Vegas alone and more than 11 million square feet of meeting and exhibit space citywide, the LVCVA's mission centers on attracting ever increasing numbers of leisure and business visitors to the area. Download the virtual reality app, Vegas VR, to experience Las Vegas from your iPhone or Android by visiting http://www.vrtv.vegas/. For more information, go to www.lvcva.com or www.visitlasvegas.com.