Jourdain Eager To Avenge His Debut

Charles Jourdain built a reputation as one of the rising stars on the Canadian regional scene with an aggressive, entertaining style that produced nine finishes in nine victories, including stoppages that secured him the featherweight and interim lightweight titles in Quebec’s TKO promotion.

Soon after he defeated Damien Lapilus to capture his second title, Jourdain was offered the opportunity to compete in the Octagon in a short-notice assignment against hometown lightweight Desmond Green in Rochester, New York. Despite being a natural featherweight and weighing 152 pounds at the time, the 24-year-old from Beloeil, Quebec jumped at the chance to fight on the biggest stage in the sport.

And then he choked.

“I cracked under the pressure,” admitted Jourdain, who returns to action this weekend in a featherweight bout against Dooho Choi. “It’s important when you lose to find those mistakes that you made and my main mistake wasn’t skill-wise — it was that I was not able to deal with that amount of pressure because there was like 16,000 people screaming at me.

“When I entered the UFC Octagon, I was like, ‘ Okay, I’m going to fight like a UFC guy — take your time, be patient,’ but that’s not me. I have nine finishes and a 100 percent finishing ratio because I’m wild, I’m flamboyant. I choked under pressure. I tried to be something other than myself.”

That’s a brutally honest assessment from the talented French-Canadian, who amassed an 8-2 amateur record before turning pro in 2016. He now carries a 9-2 mark into Saturday’s clash with the returning “Korean Superboy” in Busan, but it’s also part of what should prevent people from judging Jourdain based solely on his first appearance inside the Octagon.

Being able to reflect on your performance and identify everything that went wrong with such sharpness is something not all fighters can do and is a trait that is even more rare in young athletes who experienced a great deal of success early on and carry lofty goals with them into the UFC.

Usually when you ask a fighter, “What went wrong?” you’re handed a bunch of clichés about their opponent “being the better man” and “feeling a little off.” Seldom will a fighter just come out and say, “I choked,” but Jourdain isn’t afraid to acknowledge the truth.

“There’s a part of me that is kind of sad because your debut is always important and the UFC made a post about me on their social media page and it was a big posting saying, ‘TKO double-champion, 100 percent finishing rate’ all these big things,” said Jourdain, who competes this weekend alongside friend and fellow TKO two-weight champion Marc-Andre Barriault. “After the fight, some people were sending me messages saying, ‘The hype train got derailed! You’re a wannabe Sage Northcutt!’ 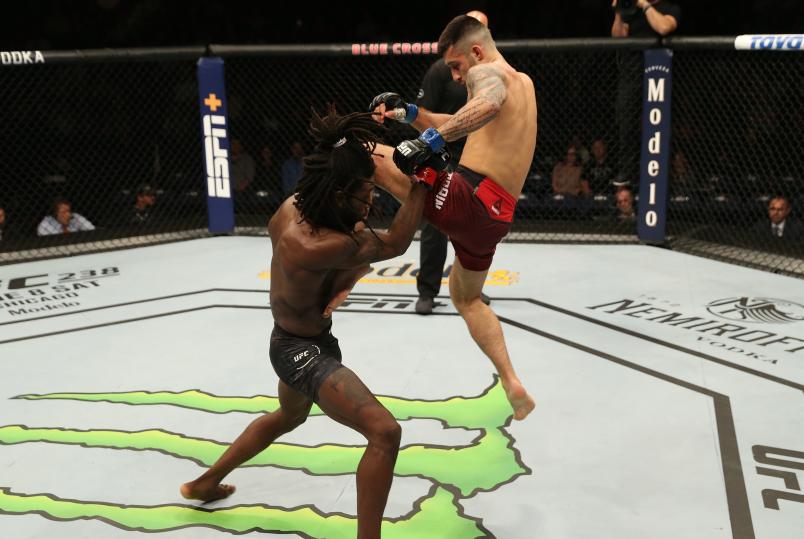 ROCHESTER, NY - MAY 18: (R-L) Charles Jourdain of Canada delivers a flying knee against Desmond Green in their lightweight bout during the UFC Fight Night event at Blue Cross Arena on May 18, 2019 in Rochester, New York. (Photo by Michael Owens/Zuffa LLC/Zuffa LLC via Getty Images)

ROCHESTER, NY - MAY 18: (R-L) Charles Jourdain of Canada delivers a flying knee against Desmond Green in their lightweight bout during the UFC Fight Night event at Blue Cross Arena on May 18, 2019 in Rochester, New York. (Photo by Michael Owens/Zuffa LLC/

“It’s easy to say it doesn’t affect me, but it did,” he continued. “I’m going to be honest, I mind because the fans are the ones paying to see you fight, so when people are disappointed, I listen to it.  When the guy said, ‘The hype train has been derailed’ I was like, ‘No, give me one more shot.’

“This fight against Dooho Choi is the one for me.”

While Jourdain did venture up to the lightweight division in his final appearance in the TKO cage, that bout — much like his UFC debut in the 155-pound ranks — it was more of a “How could I say no to this?” situation where he was presented with the chance to claim a second title and he did so successfully.

“I didn’t come into the UFC to be a 155’er,” said Jourdain, who weighed in south of 150 pounds in each of his first nine professional bouts before competing at lightweight in his last two outings. “When they called me to fight Desmond, they said, ‘It’s going to be 155’ and I said, ‘Okay.’ When I got on the scale, I was 152.

“I’m not even a big featherweight,” he added. “I was eating burgers before the weigh-in. It was a one-shot deal and now I’m back at my weight, so everything is going according to plan right now. This is going to be my home for sure.”

While he can’t get a re-do on his UFC debut, Jourdain does get a tremendous opportunity to make a splash in his first featherweight fight inside the Octagon as he welcomes the popular Choi back to the cage for the first time in nearly two years.

Out of action since his January 2018 loss to Jeremy Stephens, the talented 28-year-old who earned Fight of the Year honors for his UFC 206 classic with Cub Swanson will make the walk to the cage once again and Jourdain is elated to be the one to welcome him back on Saturday.

“When I was fighting back in Montreal, I was always the hometown favorite — I was always like ‘The King’ — but now I’m in the UFC and I’m the new guy and I want to act more like a conqueror than as the king. I’ll be king when the time comes, but now I’m the conqueror and I want to go in everybody’s backyard and say, ‘I’m the new kid on the block’ and there is no better way to do than to go and fight guys in their hometown and get the win.

“It’s a good situation for the UFC because if Dooho Choi wins, he’s “The Korean Superboy” who just came back with a statement,” continued Jourdain. “And if I win, I’m the young superstar from Canada they’ve been looking for.”

Just as he’s unafraid to admit that he cracked under the pressure during the opening two rounds of his debut against Green before shaking loose and having some success in the third, Jourdain is quick to acknowledge the UFC’s ongoing quest to find a new Canadian fighter to carry the flag for the company in the Great White North and his desire to fill the position, though he’s not quite ready yet.

“This past weekend, Max Holloway fought and at one point, Daniel Cormier said, ‘He’s the ‘King of Canada’ and I was like, ‘There is no way a guy from Hawaii can be the ‘King of Canada,’” he said. “I get it in a sense, but I would love to wear that crown.

“I’m not there yet, but it would be a great position for me because I have an exciting fighting style and a big fan base. That is a crown that I would love to wear one day.”

He can begin his journey to claiming that vacant title this weekend by learning from the mistakes he made against Green and getting back to the frenetic, in-your-face style that earned him the opportunity to compete on the biggest stage in the sport in the first place.

And that’s exactly what he intends to do.

“Some fighters say, ‘Don’t rush things,’ but that’s where I shine the most is when I rush things and put pressure, try to hit you with the kitchen sink,” he said. “I want to create as many exchanges as I can because he’s coming back from a long layoff. I’m not expecting him to be better or worse than he was — I don’t know how he’s going to look — but I want to create more and more exchanges.

“I’m going for a first-round knockout to be perfectly honest,” he added, staying true to form. “I’m going to create more and more situations where I can get a hold of him and he’s not a fighter that backs up a lot like Desmond would, so it’s going to be lots of shots every time we connect.

“I’m going to get my knee to his chin, so it’s going to be a first-round knockout for me.”