On the Rise: UFC Busan Edition

This is the UFC Busan edition of Fighters on the Rise.
By E. Spencer Kyte, on Twitter @SpencerKyte • Dec. 16, 2019

The 2019 fight calendar wraps up with the company’s second visit to South Korea as the Octagon touches down at Sajik Arena in Busan for a card that has undergone a last-minute adjustment at the top.

Initially slated to be headlined by a clash between Brian Ortega and “The Korean Zombie,” Chan Sung Jung, Ortega’s return to action was scuttled earlier this month when “T-City” was taken out of this weekend’s matchup by a knee injury.

Already in the gym begin preparations for his bantamweight debut against Cory Sandhagen at the end of January, “The Answer” jumped at the opportunity to replace Ortega and finally share the cage with the South Korean standout after he was forced to withdraw from a bout with Jung late last year due to a torn bicep.

While the names on the marquee have been changed, the depth of the fight card remains outstanding and includes a trio of newcomers looking to close out the year on a high note and build further momentum heading into 2020.

This is the UFC Busan edition of Fighters on the Rise. 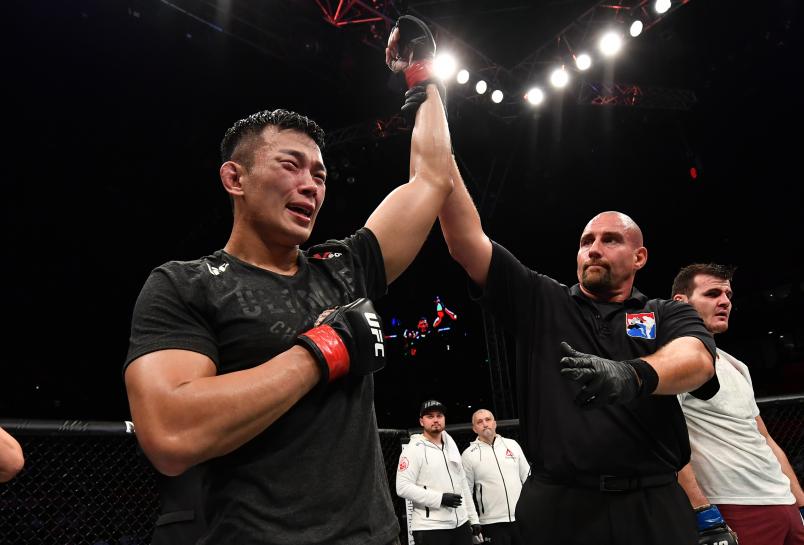 The South Korean light heavyweight made his promotional debut back in August, squaring off with Khadis Ibragimov in Shenzhen, China in a wildly entertaining back-and-forth bout that ended with Jung securing a third-round submission win.

After beginning his career at heavyweight and posting a 1-2 record through his first three starts, the 25-year-old dropped down a division and is undefeated since, with his victory over Ibragimov extending his winning streak to 11. Saturday in Busan, Jung squares off with Contender Series alum Mike Rodriguez, who has gone 1-1 with 1 no contest in his three appearances since earning a UFC contract on the opening season of the summer talent search.

Jung is one of a growing number of international prospects whose upside is difficult to define as there is only so much that can be gleaned from his triumphant run through non-UFC competition on the regional circuit. His performance against Ibragimov showed that he has the tenacity and resolve to wade into the fray and the wherewithal to capitalize on in-fight opportunities when they present themselves, but his ceiling remains unknown.

This showdown with Rodriguez on Saturday should help clarify things as the 31-year-old American works with a quality team and has faced slightly better competition throughout his career. If he can keep his winning streak intact, Jung could establish himself as someone to pay closer attention to in the light heavyweight division next year.

A winner on Week 7 of the Contender Series this past summer, Morales ventures to Busan to make his Octagon debut against South Korean veteran Dong Hyun Ma on Saturday.

Morales is an interesting addition to the lightweight ranks, as he’s significantly older than most debuting fighters with a similar record, as he turned 34 in mid-October. After beginning his mixed martial arts career all the way back in 2011, the Venezuelan-born newcomer has persevered through a pair of two-year gaps between fights and entered his appearance at the UFC Apex this past summer off an additional 12-month hiatus.

To his credit, the South Florida-based fighter didn’t show any signs of rust in making the most of his opportunity this summer in Las Vegas, dominating the opening five minutes of his headlining bout opposite LFA fixture Harvey Park before putting him away just over a minute into the second round.

The victory pushed Morales’ record to 8-0 and if he can replicate that kind of effort on Saturday against Ma, he’ll secure a solid win over a seven-fight UFC veteran and give himself an excellent platform to build from in 2020.

After securing a unanimous decision victory in her promotional debut on just two weeks’ notice, Granger looks to keep her undefeated record intact as she steps in for Veronica Macedo opposite Amanda Lemos this weekend in Busan.

Following a 5-0 run as an amateur, the 27-year-old Granger has gone 7-0 as a professional, securing wins over tough veterans like Jamie Thorton, Amy Montenegro and Jamie Colleen before getting the better of Hannah Goldy in a battle of undefeated newcomers on ESPN in August. The former CFFC strawweight champ now gets the opportunity to round out the year with a second consecutive short notice opportunity as she ventures to South Korea to square off with the returning Lemos.

Signed by the UFC in early 2017 after an unbeaten start to her career, Lemos dropped her debut to veteran Leslie Smith and has been on the sidelines ever since, having been handed a two-year suspension after testing positive for a banned substance in November of that year.

Granger has very good size for the division and should be even better this time around after getting her first appearance in the Octagon out of the way during the summer. While she hasn’t had a ton of time to prepare, the undefeated upstart profiles as a potential future contender and this should be another opportunity for “Danger” to show she is someone to keep tabs on once business gets underway next year.