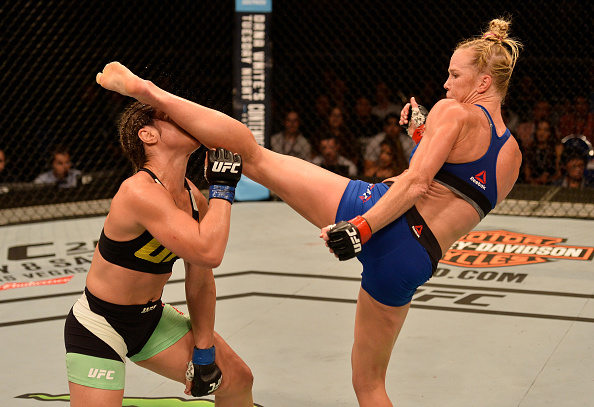 Bethe Correia stepped back and called Holly Holm forward, asking her to engage. The former women’s bantamweight champion obliged and promptly ended the fight, landing a clean “question mark” kick that sent Correia crashing to the canvas and closed out Saturday’s UFC Fight Night event in Singapore in stunning fashion.

The first two rounds were marked by hesitation as neither women wanted to press forward into danger – a pair of counter-strikers unsure about leading the dance. At one point late n the second round, referee Marc Goddard called time and spoke to Holm and Correia in the center of the Octagon, acknowledging their shared game plans, but imploring them to pick up the pace and engage more.

A minute into the middle frame, it was Correia asking Holm to bring the action, dropping her hands and motioning for the Team Jackson-Wink standout to engage and Holm responded with a perfectly timed, perfectly placed kick that brought the bout – and her three-fight losing streak – to a sudden halt.

“What I wanted to do was make it look as clean as I could,” Holm told Dan Hardy following the official decision. “That was the goal, that was the plan – to bait her into something,”

“My brothers and I used to say, ‘shin on face; shin on face,’ so this is for you brothers,” she added while watching the replay, dedicating her performance and victory to her coaches, family and friends.

Thrust into the spotlight after dethroning Ronda Rousey at UFC 193, Holm had come away on the wrong side of the results since that memorable evening in Melbourne, Australia in November 2015.

She dropped the women’s bantamweight title to Miesha Tate in her first title defense, getting choked out in the closing stages of the fifth round while ahead on the scorecards. Four months later, Valentina Shevchenko was able to out-strike the former champion on FOX, putting the women who hadn’t tasted defeat inside the Octagon at the start of the year on a two-fight losing streak.

When she returned in February to face Germaine de Randamie for the inaugural UFC women’s featherweight title at UFC 208 in Brooklyn, Holm came up just short, losing a unanimous decision to the Dutch kickboxer in a close, controversial fight.

“It’s been a year and a half since I was able to do a backflip in here,” said Holm of her customary celebration, which she nailed with the assistance of long-time coach Mike Winkeljohn. “I just feel so blessed.”

With the victory – which officially came at 1:09 of the third round – Holm’s losing streak is a thing of the past and the former champion re-enters the title picture heading into the second half of 2017.