Erick Silva - Learning From The Best

"I'm prepared for everything because I know this can happen, so I
believe in what I can do and I focus 100 percent on my performance and
not on what the opponent will do." - Erick Silva 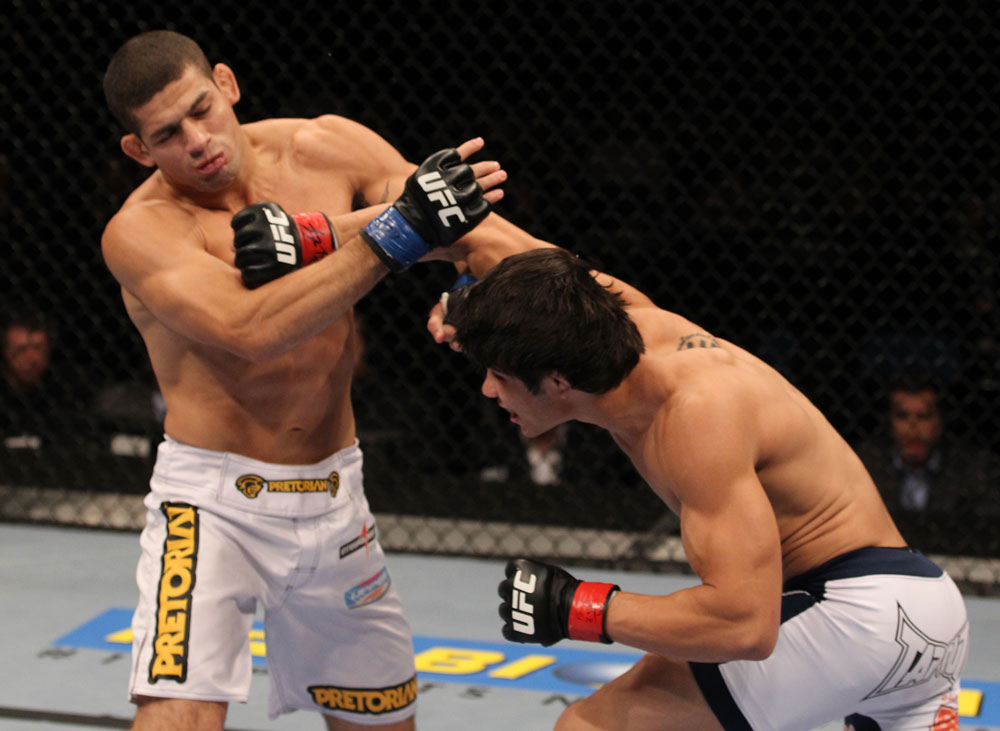 A pro since 2005, Erick "Indio" Silva, the Brazilian welterweight who makes his second Octagon appearance this weekend at UFC 142 against veteran Carlo Prater, was living a typical fighter’s life when he began competing in the sport. Working at his uncle's construction supply store during the day and training at night to compete in Brazilian Jiu-Jitsu, Silva was able to compile a respectable record in the early days of his career.

He was still a purple belt with some important wins when a chance to debut in MMA was presented to him. With confidence in the gentle art and without any significant striking ability, Silva was able to use his courage and ground technique to dispatch his first opponent ever by submission in the first stanza. That was mission accomplished for the moment, but Silva realized that he needed more, as the “top of the food chain” was his goal.

"The first step was to stop with my other job, because I needed to dedicate myself to martial arts," he says. "The next step was starting to work as a BJJ instructor, even though I was just a purple belt. I was training during the afternoon with my professor Rodrigo Damm, and later I taught my students and this was the beginning."

As a purple belt, the man who a few years later would become a UFC fighter took a lesson when he was still an amateur competitor at World Cup of BJJ.

"Everybody likes to talk about conquests, medals and etc, but I got very good experience being in fourth place of this competition," he says. "I fought around seven guys from all around the world: Japan, France, etc. After I beat the seventh opponent, I said to myself, 'this gold medal is mine,' so I faced a guy from Rio de Janeiro and lost to him, and ended up in place number four."

Nowadays with 13 victories and just one defeat (with 1 NC), Silva - a former middleweight in his early fights and now a 170-pounder - was still a fighter looking for recognition when a chance to train with the best in business appeared. After getting to know veteran manager Alex Davis, the Vila Velha native asked him to meet guys like the UFC’s 185-pound kingpin Anderson Silva, former Pride star Rogério Nogueira, former Pride/UFC champ "Minotauro" Nogueira, and former Strikeforce light heavyweight title holder Rafael Cavalcante, almost like a fan meets his idols. But he never imagined that in time, he would be part of the team and share the mats and rings with men he considered heroes.

"Davis said he was a personal friend of the Nogueira brothers, so I asked him for a meeting with my idols," he said. "But I never imagined I would train in the same gym or would fight on the same card (like what happened at UFC 134 with Anderson and Minotauro). That said, the emotion I felt when we fought on the same day back in August was indescribable."

With back and forth travels between the cities of Vila Velha and Rio de Janeiro, Silva used to train in his hometown until two and a half weeks before his fights. Then he took a trip to Rio de Janeiro to finish the camp with the Team Nogueira squad. The union was a success, and Silva hasn't lost a fight since 2006, dispatching nine opponents (plus one NC), including his Octagon debut as he’s become a force in Brazil.

"We have good sparring in my city, but since 2008 I have a friendship with Team Nogueira and X-Gym with Rogerio Camoes and Josuel Distak. I didn't look for it because I wanted to leave my region and live in Rio de Janeiro. The team and the union are the most important things. I feel like they welcomed me since then. Once I signed with UFC, I felt that I should do my whole camp here, so I'm preparing myself from the first step to the last one here with Team Nogueira and X-Gym."

The outcome of this preparation? A 40 second blitz over fellow countryman Luis Ramos back in August. The quick knockout put everybody on their feet thanks to the lethal combination of capitalizing on a foe's mistake and, without mercy, scoring a KO of the Night worthy performance.

"The sensation was great. It was the first ever KO of UFC 134, and with the crowd screaming - I can't describe it," he said. "I was very well prepared, more than I ever was. The punch connected like we expected it and it was game over. I didn't plan to celebrate with that spin; that was just the level of excitement I had at that moment. I went back to the times when I was a kid on the streets doing spins (laughs). I was among the big guys, great names, guys who are my inspirations, and I was performing on the undercard, so I felt like I needed to call for the attention and I think I got it. I showed the reason I was signed to the UFC."

Now Silva's intention is to cement his name into the minds of fans and insiders, similar to what the most famous Silvas - Anderson and Wanderlei - have already done. To start, Erick has had to learn how to deal with opponent changes. What happened before his UFC debut (when Mike Swick was forced out of their bout) happened again, as newcomer Siyar Bahadurzada was sidelined due to an injury and replaced by WEC and Strikeforce veteran Prater. But Silva’s unbothered by the change in plans.

"I'm prepared for everything because I know this can happen, so I believe in what I can do and I focus 100 percent on my performance and not on what the opponent will do. The UFC is an event where the best want to stay, so good training is a key point, as we worked hard on every single aspect so we can deliver inside the Octagon," Silva said. "I had one month to work on the strategy for Carlo Prater, and it wasn't the type of change where you have less than a couple of days. I got to study him and I'm relaxed and ready to go."