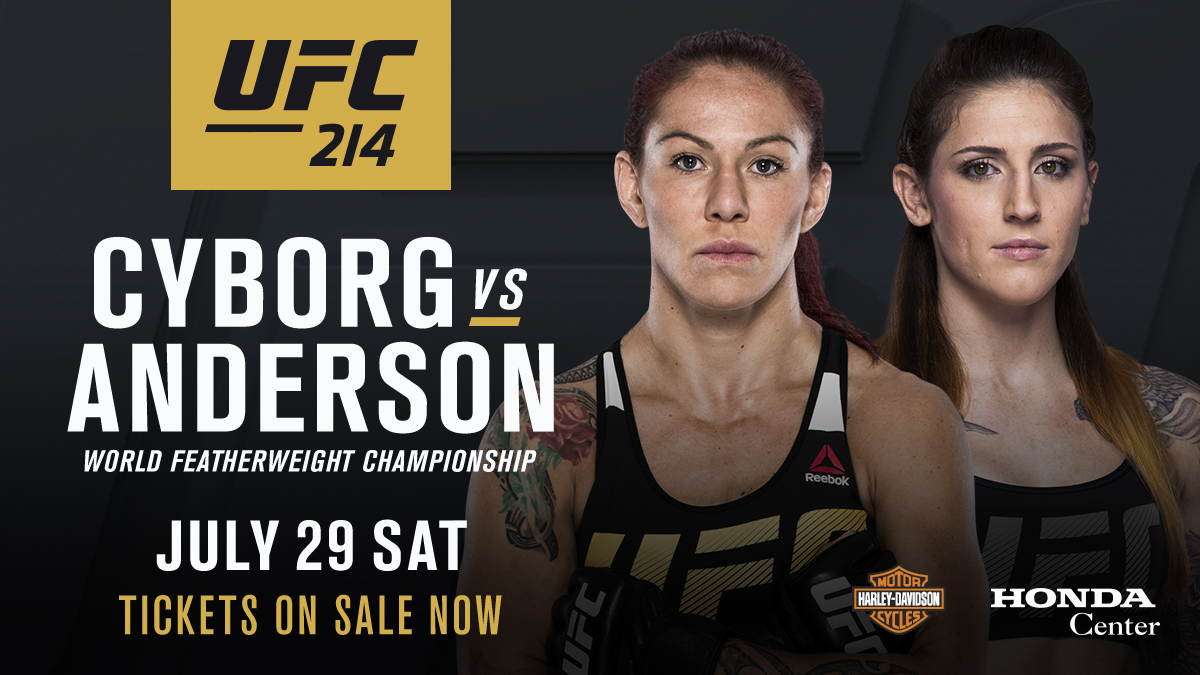 The fighters wanted it and the fans wanted it, and on Saturday, July 29, the UFC is delivering a world championship bout between Brazil’s Cris “Cyborg” Justino and Australia’s Megan Anderson, who will compete for the vacant UFC women’s featherweight title in the co-main event of UFC 214.

The bout will fill the vacancy left by the removal of Germaine de Randamie as 145-pound champion. The UFC explained the vacancy in a statement.

UFC maintains that any champion is expected to accept fights against the top contenders in their respective weight classes in order to maintain the integrity of the sport.”

In the UFC 214 main event, which airs live on Pay-Per-View from Honda Center in Anaheim, it’s the long-awaited rematch between UFC light heavyweight champion Daniel Cormier and former titleholder Jon Jones. Tickets are on sale now.

It’s been a title fight long in the making for Cyborg (17-1, 1 NC), one of the top female fighters of all-time and one of the most feared competitors in the game. Unbeaten for 12 years, the Curitiba native has owned the Strikeforce and Invicta FC championships, beating the likes of Gina Carano, Marloes Coenen and Charmaine Tweet along the way. In 2016, she made her highly anticipated UFC debut, and she didn’t disappoint in stopping Leslie Smith in just 81 seconds. In her most recent bout in September, Cyborg halted Lina Lansberg in two rounds.

Get ready for Cris Cyborg vs Megan Anderson. UFC FIGHT PASS has a curated collection to get you ready ahead of fight night

Looking to derail the Brazilian freight train rolling through Southern California this July is Queensland native Anderson (8-2). One of the rising stars in the sport, the 27-year-old began her career at home in Australia, but once she relocated to train in Kansas City, she went from prospect to champion in less than two years. A five-fight veteran of the Invicta FC promotion, Anderson has won four in a row by knockout, with her January stoppage of Tweet earning her the Invicta 145-pound title. Now she will attempt to add UFC gold to her collection when she meets Cyborg in one of the biggest WMMA fights in history.

What is Megan Anderson all about? Watch her in action for free on UFC FIGHT PASS