Another week is in the books in Dana White’s Tuesday Night Contender Series and two more fighters punched their tickets to the UFC following a pair of outstanding victories.

Karl Roberson and Geoff Neal joined the UFC roster after both delivered jaw-dropping knockouts last Tuesday night and now 10 more prospects will look to earn a similar spotlight in week four of the series.

Among the fighters competing on the upcoming card is highly touted middleweight Phillip Hawes, who has been considered one of the top up and coming talents in the sport after working alongside Jon Jones for several years at Jackson Wink MMA in New Mexico.

Hawes will compete in the featured bout this week as he takes on Julian Marquez — a 27-year-old veteran who has earned stoppages by knockout in all five of his professional wins.

With that said, let's take a look at the five matchups that will take place in week No. 4 of Dana White's Tuesday Night Contender Series, which airs live and exclusively on UFC FIGHT PASS.

Phil Hawes (4-1) has long been considered a star on the rise after receiving praise from Jon Jones while they were training together in New Mexico after both coming from the same wrestling program in Iowa. Unfortunately, Hawes struggled slightly once he garnered the spotlight, coming up short to make the cast of The Ultimate Fighter 23 and then falling in a fight to Louis Taylor last year.

Still, Hawes' explosive and dynamic style shows a ton of potential and he hopes to land back on the UFC's radar with a win on Tuesday night. At his best, Hawes is a dominant wrestler with powerful hands having earned three wins by knockout during his career.

For this matchup, however, Hawes may turn back to his grappling because Julian Marquez (5-1) is no slouch on the feet, with all of his wins coming by way of knockout.

Marquez is a very dangerous and experienced fighter with several amateur bouts under his belt before turning pro in 2014. Since then, Marquez has put together an impressive resume, including a TKO victory over UFC veteran and former Ultimate Fighter competitor Matt Hamill.

Needless to say, Hawes and Marquez both have plenty to prove in this fight and it should make for an ultra exciting affair in the featured bout this week.
START YOUR 7-DAY UFC FIGHT PASS FREE TRIAL | CHECK OUT THE DWTNCS FIGHT CARD HERE

Don’t blink in this bantamweight bout between James Gray and Kyler Phillips because both fighters have earned a reputation for ferocious finishes whenever they step into the cage.

Gray (4-1) is a very slick submission specialist who put together a very long list of amateur fights before finally turning pro in 2013. Since then, Gray has racked up four wins — all by submission — and he's got one of the nastiest ground games in the bantamweight division. Gray is dangerous anywhere on the ground, but the triangle choke might be his best weapon. He's even managed to pull off the rare flying triangle choke during his career as well.

As for Phillips (4-0), he's another top prospect in the 135-pound division coming out of Arizona, where he trains at the MMA Lab alongside several top UFC fighters, including Bryan Barberena, John Moraga and women's bantamweight competitor Lauren Murphy.

Phillips has a very well rounded skill set with wins on the ground and on the feet during his caree,r so he's going to be a tough test for anyone at bantamweight, including Gray.

If you're searching for top notch grappling, look no further than this flyweight matchup between Ronaldo Candido and Carlos Candelario.

Candido (6-0) is a familiar name for anyone who watched The Ultimate Fighter season 24, when 16 flyweights competed in a tournament for a shot at champion Demetrious Johnson. Candido made an impressive run on the show, but fell to Eric Shelton in the quarterfinal round. As Jose Aldo's grappling coach, Candido is a very high-level Brazilian jiu-jitsu artist with an arsenal of submissions that are virtually unmatched at 125 pounds.

Despite those credentials, he'll have his hands full with Candelario (6-0), who comes from a similar grappling background while also mixing in some vicious fight finishing power as well.

Candelario has put together a very impressive string of wins, with six straight victories in his professional career and five finishes. Candelario has actually only made it out of the first round on two occasions, so look for him to come out aggressively as he attempts to get Dana White's attention in this flyweight showdown. 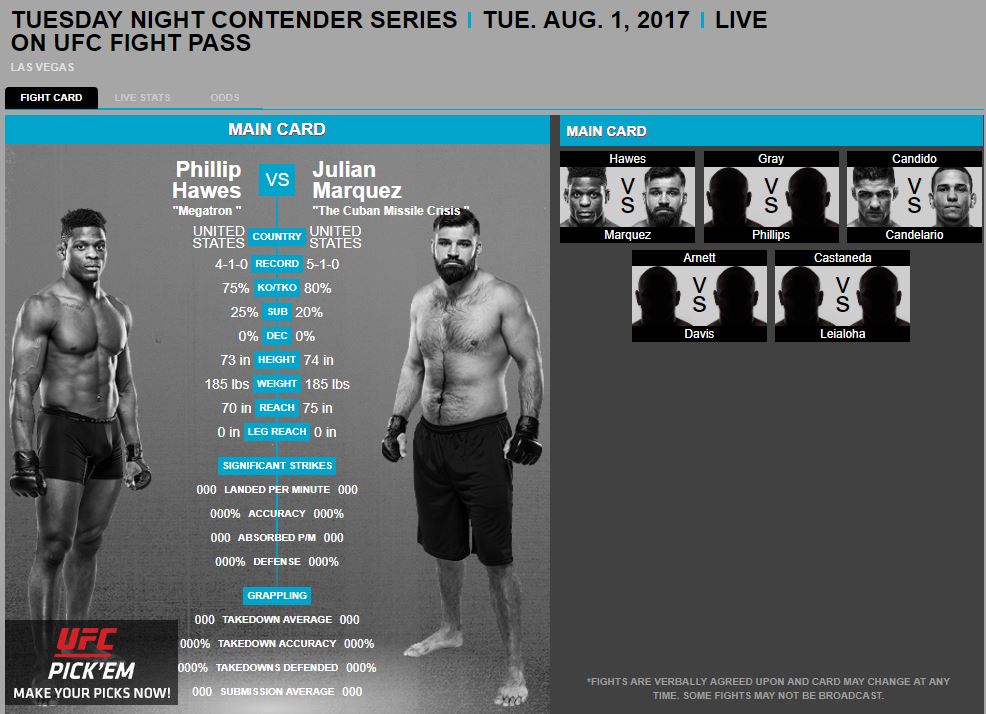 Arnett (15-2) has put together a long string of victories to get the call up to the contender series while training out of the same camp that produced Ultimate Fighter winner Julianna Pena. Arnett has earned 13 wins in a row with a mix of knockouts and submissions to his credit and at 6-0, he'll definitely be one of the bigger fighters competing at 145 pounds.

Meanwhile, Davis (7-2) has won six fights in a row as he competed primarily in regional promotions in the Southern states, including Mississippi and Florida. Davis trains under retired UFC veteran Alan Belcher, so he certainly benefits from that coaching expertise as he looks to earn a victory on Tuesday night in his first appearance in the Contender series.

The bout kicking off the card is a spectacular matchup between bantamweight prospects John Castaneda and Cheyden Leialoha.

Castaneda (13-2) comes into the fight off eight wins in a row, including a nasty KO victory over former UFC and Ultimate Fighter veteran Chris Beal in his last contest. During his recent win streak, Castenada has only gone to decision twice, with four wins coming by way of KO and the other two victories happening by submission, proving that he's dangerous no matter where this fight goes.

Leialoha (6-0) is another up and comer out of Hawaii, where he joins a long list of top fighters coming from the island, including featherweight champion Max Holloway. Leialoha has been unstoppable during the early part of his career with six straight wins including three victories coming by way of rear naked choke, which proves he's ultra dangerous if he takes the back. Just recently, Leialoha got his first TKO win as well, so don't think for a second that he won't look to earn the knockout as he looks to take out Castaneda in this bantamweight showdown.