With A Few UFC Fights Under Chase Hooper's Belt, The 22-Year-Old Is Overcoming The Imposter Syndrome And Settling Into His Life As A UFC Fighter
By E. Spencer Kyte, on Twitter @spencerkyte • May. 16, 2022

Chase Hooper is ready to start the next phase of his UFC career.

First arriving on the scene as an undefeated hopeful that secured a victory and developmental deal on the second season of Dana White’s Contender Series, the last four years have been a whirlwind for the Washington state native, who makes his 2022 debut this weekend against Felipe Colares.

He’s gone from having a target on his back on the regional circuit and debuting in the UFC to suffering two losses in three fights and suddenly having a whole lot of people knowing his name, all while simultaneously achieving one of his lifelong dreams and rubbing shoulders with genuine icons of the sport. 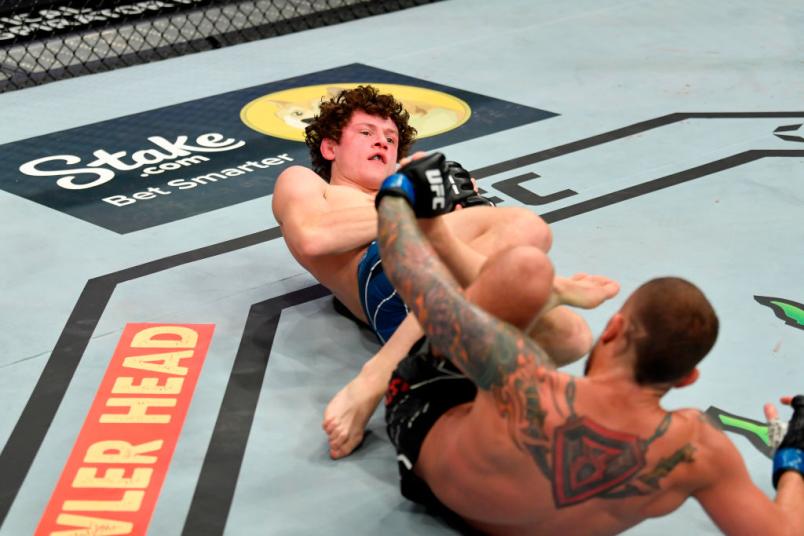 That’s a lot for anyone to deal with, and even more to process when you remember that Hooper is just 22 years old.

“It’s been a wild ride, but I feel like I’m adjusting to it well,” said Hooper, who ends the longest layoff of his career when he steps in against Colares this weekend. “I obviously got in really young, but this will be my fifth fight, so I have the process down, I’ve figured out how to deal with the outside pressures, and I know what to expect a little more from fight week; it’s not a whirlwind like it was for the first couple.

“(The toughest thing) is trying to get rid of that Imposter Syndrome and believing that you belong there.”

While many observers would characterize mixed martial arts competitors as being flush with confidence, those closer to the sport and its athletes know that it’s more bravado than anything else; a projection of confidence and swagger that masks the insecurities and self-doubt that many competitors struggle with when there isn’t a camera in their face and someone asking them how they’re going to win their next fight. 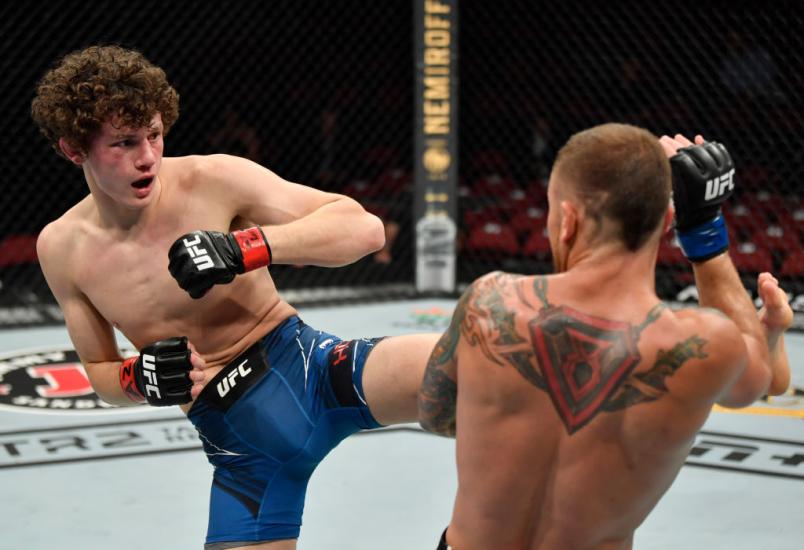 Now take those questions and mix in being one of the youngest competitors on the roster, running into fighters you idolize and admire, and then having some of them recognize you and know who you are.

Or standing across the cage from one of the longest tenured fighters in your division in your sophomore appearance inside the Octagon and knowing and believing not only that you deserve to be in there with him, but that you have the skills to beat him as well.

“It’s the same thing when you go from being amateur to pro,” said Hooper, who has alternated wins and losses through his first four UFC outings. “It takes you a couple fights to adjust to that new level because you’ve just jumped into a whole different pool of talent. Now I feel like I’m adjusting to that a little more and trying to become a more well-rounded fighter and show that I’m making the necessary improvements to stay on the roster and keep my spot.

“Obviously I have a lot of time left in me physically, but I’m not trying to wait it out; I don’t want to keep losing or having holes in my game as a fighter. So I’ve been taking the time to do things like go and train with “Wonderboy,” and seeking out these high-level wrestlers, getting these tips and tricks and high-level training to raise the levels up.

“I’m trying to raise the Fight IQ and raise my confidence in myself, and not respect the other guys as much, which I think I’ve done in the past,” he added. “But again, that’s part of that Imposter Syndrome. It’s about recognizing that I belong here and the guy that I’m fighting is on the same level as me, if not a little below, and I have to go out there and show that.” 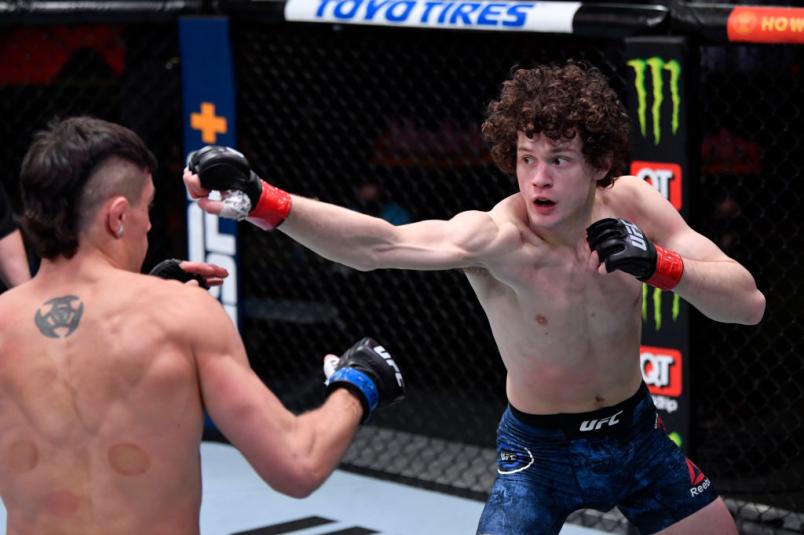 In two of his last three outings, Hooper has shared the cage with decidedly more experienced, more accomplished foes in Alex Cacares and Steven Peterson. While there was no point in either fight where the Brazilian jiu jitsu black belt stopped battling or looked defeated, he came away on the wrong side of the result each time.

Now this weekend, he takes a step back, sharing the cage with Colares, who is a few years older, but carries the same level of experience and a comparable fighting style, which has Hooper excited to get back out there and show what he’s been working on during these past 11 months.

“It’s fun because I’m fighting a very similar, super-jiu jitsu-heavy guy,” he said of facing Colares, who enters off a unanimous decision loss to Chris Gutierrez and carries a 10-3 record overall. “I’m not going to have to go in there and be too worried about being knocked out or held down. He’s a guy that will try to do a lot of the same things that I do; he’s a little shorter, a little less reach, and I imagine he’s not going to be crazy-big because his last couple fights have been at ’35.

“Losing to Cacares and losing to Peterson put the chip back on my shoulder, makes me not be content with where I’m at,” added the featherweight prospect. “It makes me want to keep pushing my levels and I feel like I’ve been doing that.” 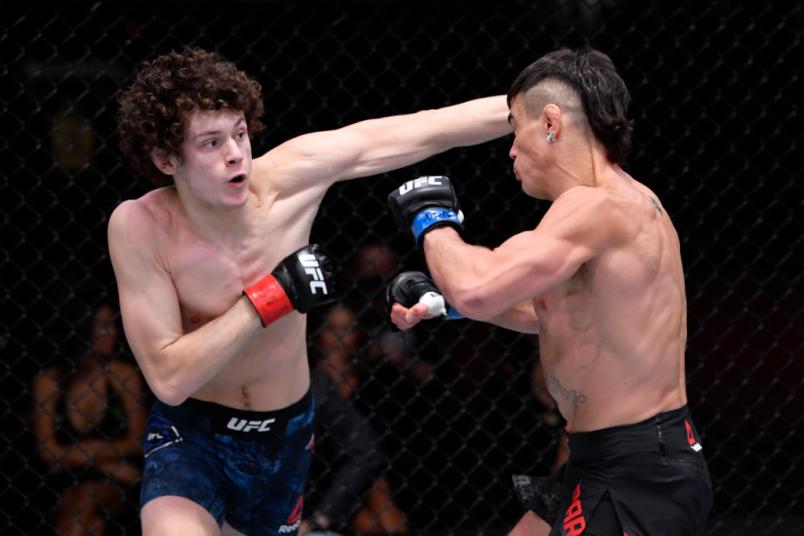 In many ways, Saturday’s contest feels like the start of a new chapter for the young featherweight.

It’s the first time in his UFC career that he hasn’t competed on a pay-per-view event, and after nearly a full year on the sidelines, Hooper has the opportunity to simply walk into the Octagon and compete like everyone else.

“I think it will be more low-key; there won’t be as much in the way of a spotlight,” he said of his bout with Colares, which is currently slated to be the second fight of the night. “This 11 months is the longest time off I’ve taken in my career — it’s been a big growth opportunity and I feel like I’ll be able to come into this fight as a more well-rounded fighter, and more ready to take on the division and face these higher level guys.

“I’m looking forward to starting my next phase in the UFC here.”