Catching up with Henry Cejudo

Henry Cejudo might be the most active retiree in UFC history.

The eight months since the former flyweight and bantamweight champion announced his retirement has felt more like eight weeks, as Cejudo has seemingly spent just as much time calling out anyone he can think of as he did with two belts draped over his shoulders.

Cejudo has stirred the pot with the usual and expected list of Petr Yan and Alex Volkanovski, to names outside of the Octagon like Jake Paul and Ryan Garcia. And there certainly hasn’t been a lack of cringey videos. In fact, Cejudo even spent time in a recording studio, with a music video to prove it.

We about to go platinum with “Cringe Ass Henry” move out the way @LilTunechi pic.twitter.com/2CX8acrgsr

So why has the “King of Cringe” not kicked his feet up after the culmination of a competitive career which spans nearly two decades?

“People think I miss the game, miss the sport, wonder if I’m going to come back, but honestly, sometimes I just get bored and I gotta call somebody out,” Cejudo said.

In his time away from the keyboard, “Triple C” has split his focus between starting his next endeavor in real estate and spending a significant amount of time with Mike Tyson leading up to his exhibition match against Roy Jones Jr. in November.

The amount of time spent with Tyson had fight fans wondering if they would see Cejudo swap his four-ounce gloves for a pair of ten-ounce ones anytime soon. 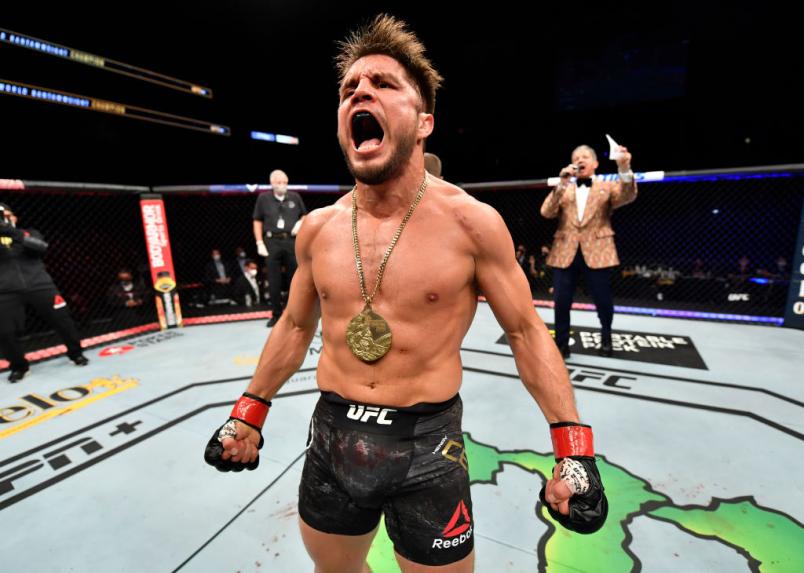 Henry Cejudo celebrates after his knockout victory over Dominick Cruz in their UFC bantamweight championship fight during the UFC 249 event at VyStar Veterans Memorial Arena on May 09, 2020 in Jacksonville, Florida. (Photo by Jeff Bottari/Zuffa LLC)

Henry Cejudo celebrates after his knockout victory over Dominick Cruz in their UFC bantamweight championship fight during the UFC 249 event at VyStar Veterans Memorial Arena on May 09, 2020 in Jacksonville, Florida. (Photo by Jeff Bottari/Zuffa LLC)

While it’s been made exceedingly clear that Cejudo can always make room for more gold in his trophy case, he said the conditions have to be just right.

“What I need is something to make me motivated. Which [in the UFC], it’s one of two things: legacy — if I fight Volkanovski — or it better be a crazy payday,” Cejudo said. “But just the fact that I’m an Olympic champion, I’m a two-division UFC world champion and I defended both of my belts? I’m happy.”

ONTO THE NEXT CHAPTER

So now he’s back at square one. It’s a place he’s been before and a place he’s comfortable in, because Cejudo knows that all he needs to truly be successful is a new challenge and a timeframe of four years or less.

Two years, nine months and 27 days: that’s all the time it took from Cejudo’s first senior-level wrestling match to reaching the pinnacle of the sport, draped in an American flag with an Olympic gold medal around his neck.

And the time from his Octagon debut to dethroning one of the greatest flyweights to grace the canvas to win his first UFC belt? Three years, seven months and 22 days. 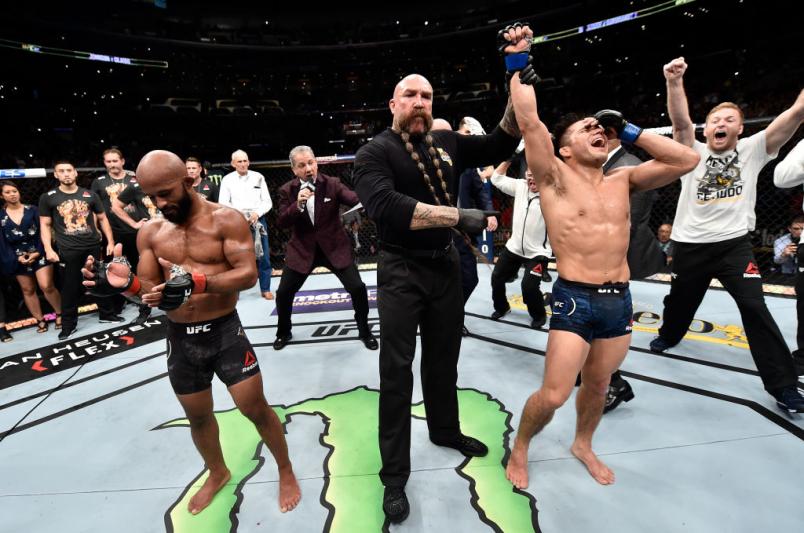 Henry Cejudo celebrates after his split-decision victory over Demetrious Johnson in their UFC flyweight championship fight during the UFC 227 event inside Staples Center on August 4, 2018 in Los Angeles, California. (Photo by Jeff Bottari/Zuffa LLC)

Henry Cejudo celebrates after his split-decision victory over Demetrious Johnson in their UFC flyweight championship fight during the UFC 227 event inside Staples Center on August 4, 2018 in Los Angeles, California. (Photo by Jeff Bottari/Zuffa LLC)

“What I take from the sport of wrestling, and even from fighting, is that you put a timeline on stuff,” Cejudo said. “Then you start breaking things down from there. You make sure your lifestyle makes sense with what you want to achieve. You set goals. You work toward them.”

So for the 33-year-old whose life has been lived through a series of Olympic cycles and training camps, the transition into real estate is just another fresh start at the beginning of a new timeline.

Just like in combat sports, Cejudo said he wants to “do it all” with plans for commercial and residential real estate, and even luxury spec home building down the road. But for now?

“I want to start by investing in the communities in Phoenix that have a bunch of drugs and violence,” Cejudo said. “I want to start to clean up the city in the places where I grew up, like Maryvale and central Phoenix.” 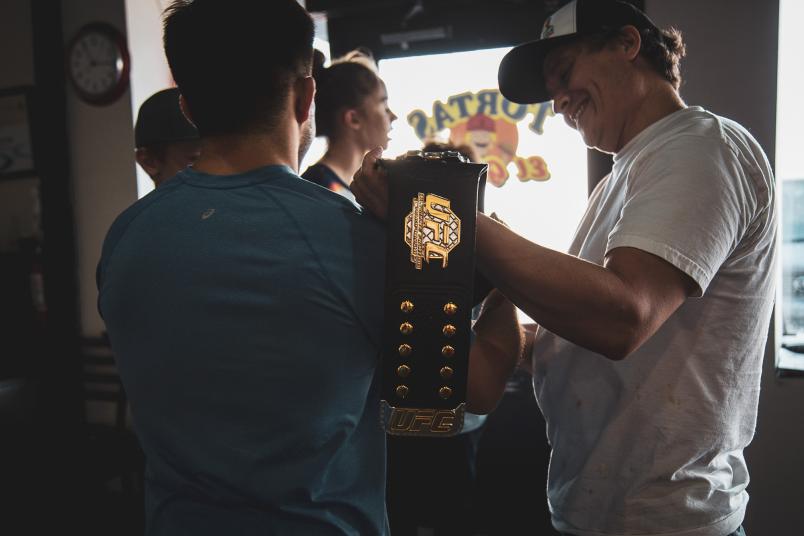 Henry Cejudo pays a visit with his new flyweight champion belt to one of his favorite Mexican restaurants, Tortas El Guero, in Phoenix in October 10, 2018. (Photo by McKenzie Pavacich)

Henry Cejudo pays a visit with his new flyweight champion belt to one of his favorite Mexican restaurants, Tortas El Guero, in Phoenix in October 10, 2018. (Photo by McKenzie Pavacich)

So “The Messenger” will return to his roots, starting with plans for Section 8 housing and duplexes, but eventually he intends to work his way up to building luxury homes on top of Phoenix’s picturesque Camelback mountain.

“I’m a visionary, I can see this stuff manifesting,” Cejudo said. “But I know that I’m going to be in the sacrificing stage for at least four or five years. I still have a fighting-type sense right now because I know I’m not ready to be a world champion in real estate yet.”

After 17 years of competing at the highest levels of sport and achieving a resume unmatched by anyone in the UFC, Cejudo has been taking time in his new life of retirement to reflect on his career.

“I’m happy with my career and what I was able to do, like save the flyweight division,” Cejudo said. “I took it upon myself to create this character, and then I fell in love with it. A lot of it is me, it’s just turned up a notch. I am confident, I am a bit cocky. But I’ve been like that since I was a kid; I had to be.” 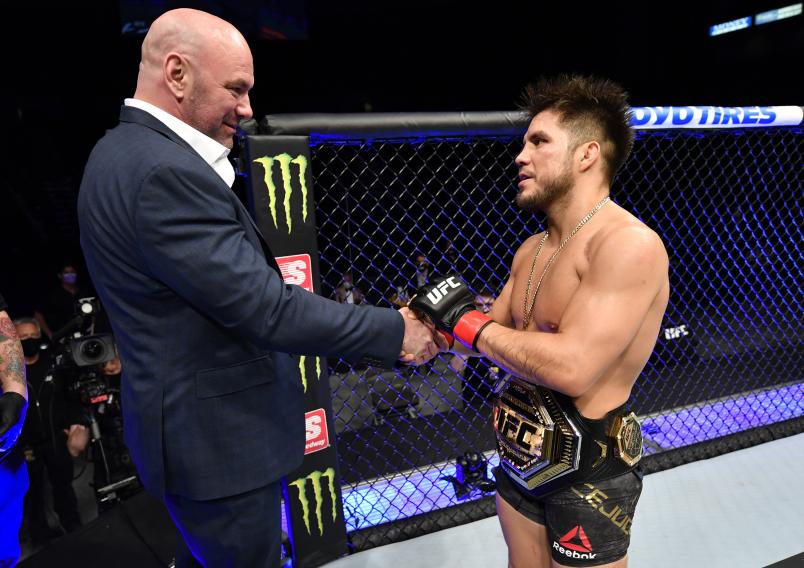 Henry Cejudo talks with UFC president Dana White after announcing his retirement in the Octagon after his UFC bantamweight championship fight during the UFC 249 event at VyStar Veterans Memorial Arena on May 09, 2020 in Jacksonville, Florida. (Photo by Jeff Bottari/Zuffa LLC)

Henry Cejudo talks with UFC president Dana White after announcing his retirement in the Octagon after his UFC bantamweight championship fight during the UFC 249 event on May 09, 2020 in Jacksonville, Florida. (Photo by Jeff Bottari/Zuffa LLC)

And while the “King of Cringe” persona has received mixed reviews across the board, Cejudo said he’s confident that his actions inside of the Octagon have spoken louder than those on social media.

“I love the things I’ve done in this sport. I walked the talk, I was the real deal,” Cejudo said. “I may not be 29-0 or be GSP, but I feel like I’m secretly the most respected dude in the UFC.”

After all, it’s hard not to respect the only fighter to be an Olympic champion and don UFC belts from two divisions simultaneously, secretly or not.

Cejudo also reflected on the things he wishes he had done a little differently. He said he’ll take these lessons with him as he moves on to the next chapter of his life.

“I think I could have done things differently, with gratitude,” Cejudo said. “I think I could have thanked more people. You forget how much people care when you're so stuck on yourself. I wish I had just given more of my journey to people. Because making them part of your success is kind of what you owe to the people who support you.”

While we can’t expect Cejudo to go gently into that good night of retirement, a return to the Octagon isn’t certain. It’s Cejudo’s way of keeping us all on our toes.