The Blueprint - Jones vs. Rampage

The biggest light heavyweight fight of 2011 takes place this Saturday at UFC 135 in Denver. Michael DiSanto breaks down Jon Jones vs. "Rampage" Jackson... 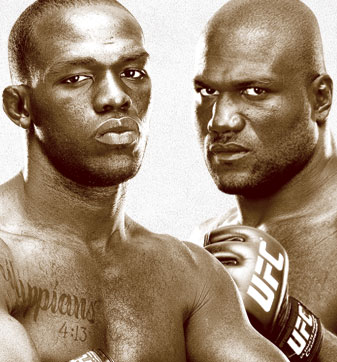 On March 19, 2011, Jon Jones became the youngest man in the history of the sport to win a UFC championship at a fresh, young 23 years and 242 days. And he did it in dominant fashion, annihilating then-champion Marcio “Shogun” Rua via third-round technical knockout.

Jones will defend his belt for the first time on Saturday night. Six of the previous nine 205-pound champions failed to successfully defend the belt.  Will he make it seven out of the previous 10?

Quinton “Rampage” Jackson certainly thinks so. He is the man who will put Jones’ championship mettle to the test in the main event of UFC 135. By the way, Rampage just so happens to be one of the three men who successfully defended the belt at least once in the last eight years.

This fight is a huge step in Jones’ career. Gigantic, actually.

Don’t get me wrong. The win over Shogun was monumental. But Jones’ length and wrestling, combined with the fact that Shogun was coming off yet another surgery-imposed injury layoff, made it a perfect matchup for the burgeoning superstar.

Rampage is not a favorable matchup. In fact, he is not a great matchup for anyone, though that is not to suggest that Jones cannot win this fight. He absolutely can win, and it is probably a bit more likely than not that he will win. But he is going to have to be on point in order to leave the arena with the belt still tightly strapped around his waist.

Jones has all the potential in the world. This guy has every tool to be great. But let’s not get ahead of ourselves just yet. He has just 14 professional fights, including just eight in the UFC. Rampage has nearly three times as much overall experience and has fought a “who’s who” of the sport while competing at the elite level for a full decade.

To put that into perspective, Jones had just turned 14 years old when Rampage made his PRIDE debut. And Rampage is just 33 years old, well within his fighting prime.

Yet, it would be foolish to assume that Rampage has seen everything that Jones can throw at him. I’m not sure that the sport has ever witnessed a 205-pound athlete quite like Jones.

Standing 6’4, he has an insane 84.5-inch reach. That means he can hit Rampage from a distance that would otherwise be unthinkable for most fighters. There is no way for the former champion to properly prepare for Jones’ length, unless he is training with heavyweight contender Cheick Kongo, who also stands 6’4, though his reach is almost three inches shorter than what Jones sports.

The other unique part of Jones’ game is his willingness to attack with video game-like strikes. Spinning backfists, spinning elbows, front kicks, axe kicks, flying knees, and just any other strike you can imagine is within the realm of possibilities when Jones fights. He throws them with extreme confidence, so they tend to land and do very real damage. Again, it is virtually impossible for Rampage to fully prepare for those unorthodox strikes.

Mix all of that in with Jones’ elite takedown skills, good cardio and excellent physical strength and you start to see the full picture that is Jon Jones. Through his eight UFC bouts, he has dominated every opponent in every facet of the game. He outboxed a golden gloves boxer. He out kickboxed a dangerous kickboxer. He outwrestled a world-class amateur wrestler. He beat up a Brazilian Jiu-Jitsu black belt on the ground.

It’s not surprising that many pundits have anointed this guy as the Second Coming.

Nevertheless, Rampage presents a different look than anything Jones has seen in his short career. He is a very well rounded fighter. Yet, ever since transitioning from PRIDE to the UFC, he has fought in an almost exclusively one-dimensional fashion. Rampage loves to box – not kickbox, box. And he ignores virtually every other aspect of his game in his insatiable hunger for fistic knockouts on the feet.

As good as Jones is on the feet, he wants no part of a fisticuff exchange with Rampage. Trust me on that one. Rampage is one of the game’s most versatile punchers. He can knock out anyone with either hand with only a single punch. Chuck Liddell got his lights turned out with a looping right. It was the first time anyone left Liddell in an unconscious heap in his illustrious career. Rampage put Wanderlei Silva to sleep with a left hook.

Rampage also has tremendous wrestling skills, though he has completely ignored them as of late. The last time we saw Rampage use anything close to resembling his wrestling was in his five round thrashing of Henderson four years ago. By contrast, in PRIDE, Rampage was famous for slamming and then ground-and-pounding his opponents. I will never know why he has turned away from that strength as of late.

Conventional wisdom suggests that Rampage should rely on his wrestling and physical strength to put Jones on his back, and force him to address the one major question mark hanging over his head. We simply do not know if the champion can fight effectively, or even survive, from his back. If one takes to heart the comments by Jones’ former friend and training partner Rashad Evans, then it could be that the champion’s major weaknesses are defending and attacking from his back.

Of course, none of his foes have been able to put him there to find out if that is true or not. Don’t expect Rampage to be the first, despite the fact that devising a game plan to create takedown opportunities may be his best chance to win.

Unfortunately for the former champion, he is far too enamored with his boxing skills to concern himself with takedowns. He won’t be looking for a takedown, unless a Jones strike puts him on ice skates. Trust me on that one. I’m absolutely certain of it. Rampage will come out looking to throw hands with Jones to the exclusion of every other facet of his game, just like he does in every fight. That is true regardless of who he is fighting. It will be true on Saturday night.

Jones needs to take advantage of that approach to the game by refusing to engage in a boxing match with Rampage. He should take a page out of Forrest Griffin’s playbook and kick Rampage’s lead leg until the challenger can no longer put any weight on it.

Rampage walks down opponents with laser-like focus, always looking for an opening to land a lead right hand or counter anything. That tunnel vision results in him either failing to identify lead leg kicks in time to check them or simply not caring enough to worry about that part of the game. Whatever the case, that lone strike singlehandedly won the title for Griffin in their 2008 bout.

It can be the lone reason that Jones retains his title on Saturday night, if the champion commits to the strike early and often. Rampage likely won’t check them, and that will come back to haunt him.

Jones can also take a page from Rashad Evans’ playbook and use strikes to set up takedowns. Rampage sits down on his punches so much that he routinely leaves himself open to takedowns. Once on the ground, he has virtually no offensive submission game from his back. He can defend pretty well, and he certainly has the ability to scramble back to his feet or sweep, but he isn’t going to catch Jones or anyone else with an armbar, triangle choke, gogoplata or any other submission from the guard.

It is probably pretty obvious that I believe that Jones has many more ways to win the fight than Rampage does on Saturday night. I think it is tough to make any argument to the contrary, assuming the one proffering the argument wants to pass the laugh test.

The assumption, therefore, must be that I’m picking Jones to win.

Every criticism written above about Rampage is accurate. He has largely become a one-dimensional fighter of late. But that one dimension is so much better than everyone else that it is scary. Rampage is the best boxer in the division by leaps and bounds.  He is exceptional at avoiding clean shots and delivering one in return. All it takes is one mistake by Jones and Rampage can turn the lights out, whether in the first minute or the 24th minute.

Jones does not have that ability, and that will be the difference in the fight. In addition, this whole mess about spygate in Rampage’s camp will serve to help Rampage. Jones admitted in his SpikeTV interview last week that his foe’s allegations of cheating have gotten inside his head.  Jones is a young, emotional guy. Fighting a killer like Rampage with emotion is the wrong thing to do. If Jones comes out looking to teach Rampage a lesson with his fists, he will get his lights turned out.

That is precisely what I think will happen. If not, I think Jones will embark on what could turn out to be a record-setting run at light heavyweight. Either way, this is can’t-miss TV.