The Blueprint - Belfort vs. Johnson 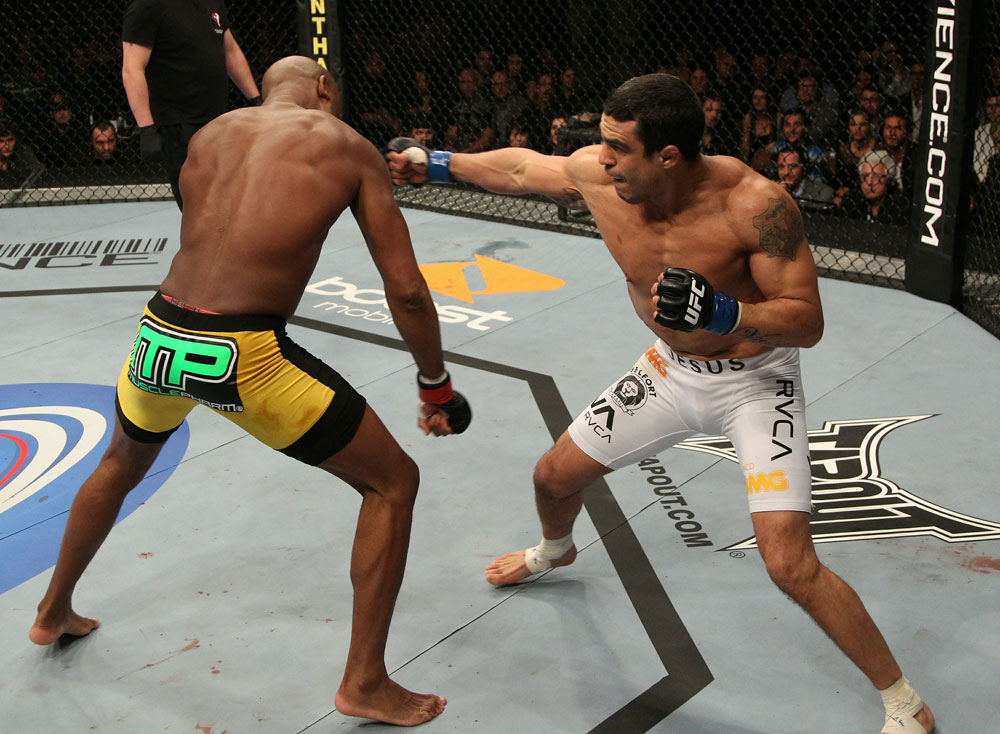 Anthony Johnson is a career welterweight who is tired of the massive self-deprivation required in order to make the division’s 170-pound weight limit. “Rumble” often walks around at over 200 pounds, so in order to compete, that means that more often than not, his camps are focused on shedding weight, rather than properly preparing for a fight from technique and game growth perspectives.

The weight cut was such a problem that Johnson twice, in ten UFC bouts, missed weight. He was six and one-half pounds over for his fight against Rich Clementi back in 2007, tipping the scale at 177.5 pounds, rather than the allowed 171 pounds for non-title welterweight affairs. Two years later, he missed by five pounds against Yoshiyuki Yoshida.

Despite hitting the mark for the past three fights, Johnson has finally had enough. He believes that, at 27 years old, he has simply outgrown the welterweight division. Thus, he is moving to middleweight for the first time on Saturday night at UFC 142. Johnson will still be cutting weight, but not like when he competes at 170 pounds.

There is little doubt that Johnson will be stronger and more explosive at middleweight. He likely will have better cardio and generally feel better from not having to shed an additional 15 pounds. Yet, nobody knows whether all that will result in a better fighter. He might be better in the literal sense, but the question is whether Anthony Johnson 2.0 will perform better against middleweights than Anthony Johnson 1.0 did against welterweights.

Rather than dip his toe into the middleweight water in search of an answer to that question, Johnson is diving in head first into a rip tide without any sort of a life vest because first up at middleweight is none other than former heavyweight tournament winner and former light heavy champ Vitor “The Phenom” Belfort.

Belfort is one of the most feared strikers in all of mixed martial arts. The Brazilian debuted in the UFC back on February 7, 1997, when he was only 19 years old. He won the UFC 12 Heavyweight Tournament that night by knocking out Tra Telligman and Scott Ferrozzo in a combined two minutes.

Fast-forward 15 years. Belfort is now a 34-year-old former champion who is looking to conquer his third weight class. The difference, of course, is that Belfort has moved down in weight over the years, not up.  He has also been competing in the middleweight division since July 19, 2008, so there are no question marks over how his body will perform at 185 pounds. In fact, Belfort’s volume of work below 205 pounds suggests that this is his best weight class.

So suffice to say that Belfort will be the biggest, strongest, most accomplished opponent that Johnson has ever faced.

It only adds to the intrigue that Johnson will be fighting one of the most amped up and focused Vitor Belforts that the world has ever seen, since he is fighting in his native Brazil for the first time since annihilating Wanderlei Silva at UFC Brazil way back on October 16, 1998. And it is a prelude fight to Belfort assuming a coaching role opposite Silva on “The Ultimate Fighter: Brazil” – the first time that the UFC’s hit reality show will film a season outside of the US. Taping starts shortly after UFC 142.

On paper, this seems like an insurmountable task for “Rumble” because he doesn’t appear to enjoy an advantage in any area of the fight. Belfort is the better striker. He is the superior grappler. He is more experienced and accomplished. According to individuals who have trained with both, he is also the stronger, faster fighter.

The only area where Johnson may enjoy a slight edge is in his cardio. Neither man will be confused with the Energizer Bunny any time soon, but Belfort’s cardio has been notoriously bad over the years. Johnson also appears to tire quickly in fights, but he has enjoyed much more success in fights lasting the distance than Belfort. The American is undefeated in those bouts, whereas Belfort has won less than half of his.

None of that really matters, though. Why? Because fights don’t compete on paper. No fighter is perfect. Everyone makes mistakes. One mistake can lead to an instant loss thanks to a perfectly placed strike or an inescapable submission hold. That is what makes MMA such a great sport.

If Belfort is foolish enough to drop his hands, Johnson has more than enough power in his overhand right and right high kick to abruptly turn out the lights. “Rumble” scored knockouts in six of his last seven victories. None of those knockout victims had Belfort-like resumes. Yet, there is no denying that the reality of competing with four-ounce gloves and uncovered shins is that anyone can get knocked out on any given night in the UFC.

If the former champion lets his focus lapse, Johnson has the wrestling chops to take the fight to the ground. Belfort may be a vastly superior grappler, but he has a terrible habit of resting in his guard, rather than working his transition jiu-jitsu or quickly scrambling back to his feet. That opens the door for Johnson to score a fight-altering cut, work some cardio-sapping ground and pound, or just score points on the judges’ cards for spending time on top.

One mistake. That is all it takes. Belfort is acutely aware of that fact after his knockout loss to Anderson Silva just about one year ago. He failed to properly identify a front kick to the face, and he found himself waking up moments later with his first taste of middleweight defeat. It can happen again on Saturday night, if he isn’t sharp.

But that isn’t the only way for Johnson to win. He can also take advantage of Belfort’s tendency to move backward and pose, rather than circling and striking, in the face of controlled pressure. Johnson can initiate that tendency by slowly approaching with his hands up ready to punch. Belfort will oblige by taking equally slows steps backward, coiled and ready to counter.

Johnson should not fire a haphazard strike during his approach, otherwise it is lights out. He should, instead, just come forward with confident, yet measured, steps with his hands held high. Belfort will continue backing up until he nears the cage, at which point, he will either circle out to his right or stand his ground and initiate an exchange.

Johnson should anticipate that and either shoot for a takedown when Belfort is within a step of the cage or step to his own left and fire his right hand. The former is the best way to get Belfort to clinch, rather than effectively sprawl. The latter is the best way to avoid a counter left hand, while still creating an opening to step inside and initiate a clinch himself.

Belfort is an expert clinch fighter. But his first instinct will be to defend the takedown, rather than turn his opponent. That will create an opening for Johnson to drop his weight and secure a good position smothering Belfort against the cage. He will need to keep working for takedowns and mix in some dirty boxing and knees to avoid a referee restart, but he should focus first and foremost at maintaining the outside position for as long as the referee will allow it. Not only will this score points for Octagon control on the judges’ cards; it will also start to sap Belfort of his explosiveness as he begins to use up his precious cardio defending in the clinch.

If there is a restart or the period comes to a close, Johnson should go right back to that game plan when the action gets back underway. Belfort’s counterstriking style is so deeply ingrained into his DNA that I would be absolutely shocked to see him react any differently than walking backward, if Johnson uses cautious aggression, as outlined above.  The sequence should play itself out again and again, just like it did in Belfort’s third fight with Randy Couture and his bout with Tito Ortiz.

As Belfort’s cardio begins to betray him, Johnson can mix in aggressive takedown attempts and combination striking, rather than clinching once his foe nears the cage. Belfort’s extremely high percentage of fast twitch muscle fiber means that his explosive speed and power will decrease proportionately with his cardio. That is evidenced by the fact that he has never scored a knockout or a submission win in the third round. Not once in his illustrious career. Thus, Johnson can more freely open up his offensive game once the final round arrives.

Belfort, on the other hand, won’t likely enter the cage with much of a game plan. I’m sure his coaches will have him fully prepared with an excellent game plan designed to take advantage of Johnson’s own technical flaws. That plan will undoubtedly include Belfort taking the offensive early in the fight. He is an absolute beast in sparring when he fights aggressively, rather than always countering.

Yet, all that will go out the window, once the fight is underway. It always does with Belfort. He will instead stand and wait. He will retreat and wait. He will circle and wait. All the while, he will be waiting for Johnson to attack so that he can counter. Belfort won’t have a counter in mind. He counters by instinct. Years of training have made his response to incoming fire instinctual.

It might be a bombing left hand, followed by a series of rights and lefts thrown in machine-gun fashion. It might be a flying knee, followed by that same series of rights and lefts. It might be all sorts of things. But what it won’t be is a single, haphazard strike. That isn’t how Belfort gets down. And that won’t be how he responds when he sees an opening on Saturday night. It will be all-out aggression, which almost always results in an opponent ending up on the canvas. I don’t think Saturday will end any differently.

Again, on paper, it seems like this will be an exceedingly difficult challenge for Johnson, one that he likely won’t overcome. Then again, fights only unfold on paper in the minds of writers. I’m quite sure Anthony Johnson couldn’t care less about what I write in this breakdown because he is coming to Rio de Janeiro, Brazil to win. Let’s see if he can pull it off.