After going 0-3-1 in his last four bouts, Bobby Green’s three-round unanimous decision win over Erik Koch at Spectrum Center in Charlotte may be the biggest of his UFC career, allowing the lightweight veteran to continue his quest to get to the top of the division.

All three judges saw it 29-28 for Green, who picked up his first victory since defeating Josh Thomson in July 2014.

The action was high-quality in the first five minutes, both fighters mixing things up on the feet as they landed jarring blows. In a close round, little things can be the difference, though, and a Koch takedown with a little under two minutes left may have allowed him to edge it.

Green (24-8-1) and Koch (15-6) focused on the body in the second, and while Koch did well at range, up close Green held the advantage. Soon, both were bleeding, and the exchanges were heating up, with Green pressuring as he began to pull ahead.

A right hand by Green appeared to rattle Koch and force him into a clinch, but “New Breed” recovered quickly and went back to his long-range striking. Green cut the distance quickly, though, firing off punches and kicks to the body and head. Midway through the frame, Green scored a takedown, but with 1:45 left, Koch reversed position and with a little over a minute left, Green pulled off a reverse of his own, putting him in the top position until the horn.

Back in action for the first time since a March 2017 loss to Darren Elkins, featherweight contender Mirsad Bektic scored a first-round TKO over Brazilian veteran Godofredo Pepey.

Pepey looked to be on his way to a good night, as he countered well, bloodied his foe and kept Bektic from getting into a rhythm with his striking. But the Bosnia native turned things around in a hurry, with a right hand to the solar plexus hurting Pepey and sending him to the canvas. The follow-up attack was mere window dressing, with referee Kevin MacDonald stepping in at 2:47 of the opening round. 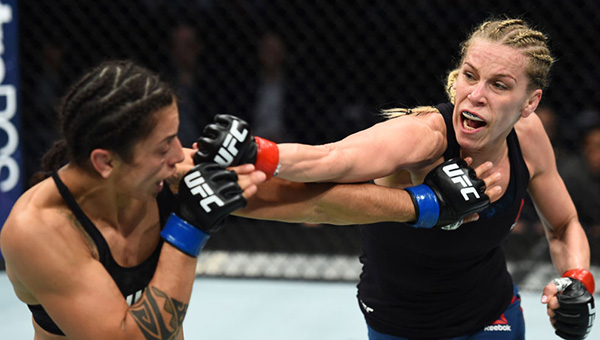 Chookagian’s jab and kicks were the deciding factor in the bout, as she kept the Italian at bay throughout. Borella landed more than her share of shots, but they had little effect on the “Blonde Fighter,” who rose quickly from the lone takedown in the fight in round three, using a triangle choke attempt to get back to her feet.

No. 11-ranked strawweight contender Randa Markos picked up her fourth UFC win, as she shut out Juliana Lima over three rounds.

There wasn’t much significant scoring in the opening round, as Markos (8-6) smothered Lima (9-5) in the clinch for much of the frame, but in the closing minute, Lima scored a takedown that was answered by a sweep into mount by Markos, lifting the action level before the horn.

Markos continued to use her wrestling attack to good effect in the second, and when you add in her ground-and-pound game, it was another round for the Ontario product, who kept the pattern intact in the final round, earning herself a victory by three scores of 30-27.

Kish had a little difficulty dealing with Kim’s reach advantage early in the first round, leading her to get tagged with several shots, but as the round progressed, the pressure of the former Ultimate Fighter 20 cast member began to pay off as she figured out the distance and scored with a busy striking attack. Kish appeared to take the second in another close round, but in the third, an aggressive surge by Kim ultimately proved to be the deciding factor as she took the decision by scores of 30-27, 29-28 and 28-29.

Former Ultimate Fighter competitor Vinc Pichel made it four wins in a row in lightweight action, as he handed Joaquim Silva his first UFC loss via unanimous decision.

The movement of Silva kept Pichel from getting into an offensive rhythm in the first round, and when Silva decided to switch from defense to offense, he continued to control the action, putting an impressive round in the bank.

Silva appeared in the driver’s seat in round two, but a more aggressive Pichel got on the board and began chipping away at his opponent’s defenses, landing the more telling blows in the process.

The best action of the fight was saved for the final five minutes, with each fighter taking turns in the lead, leaving the judges with a tough task. In the end, it was California’s Pichel getting the victory by three scores of 29-28, improving his record to 11-1. Curitiba’s Silva falls to 10-2.

Welterweight up and comer Niko Price rebounded well from his October loss to Vicente Luque, moving to 3-1, 1 NC in the UFC with a second-round submission victory over George Sullivan.

Sullivan (17-6, 1 NC) scored early on with a 1-2 that got Price’s attention, prompting the Floridian to start grappling with “The Silencer.” Price got a takedown that was answered by Sullivan, but Price reversed position on the mat, allowing him to keep the ground edge.

Price (11-1, 1 NC) staggered Sullivan in the first minute of round two, but was taken down moments later. Price looked for a submission from his back as Sullivan fired off strikes from the top, cutting his foe. With 1:20 left, Price scrambled out of trouble, taking Sullivan’s back, and after sinking in a rear naked choke, he got the tap, with the bout ending at 4:21 of the second stanza.

Living up to the hype tonight!@Cors_Life shines in his UFC debut. #UFCCharlotte pic.twitter.com/r3PLOAYypd
— UFC (@ufc) January 27, 2018

Just eight days after a 67-second knockout win in an LFA event, Cory Sandhagen kept the KOs coming, as he stopped Austin Arnett in the second round of a meeting of featherweight newcomers.

Sandhagen mixed things up nicely in the first round, digging to the body, kicking to the legs and throwing in a takedown and ground-and-pound for good measure. Arnett hung in there, but in the second, things got worse, as Sandhagen kept ripping Arnett with body shots, and eventually, Arnett dropped to the mat, with the follow-up series of ground strikes bringing in referee Joseph Hawes to halt the bout at the 3:48 mark of round two.

With the win, Colorado’s Sandhagen moves to 8-1. Washington’s Arnett falls to 15-4.