The 25-year-old from Baton Rouge is set to make the walk for the first time this weekend, squaring off with Matthew Semelsberger in a highly combustible welterweight pairing. It’s a big spot for the unbeaten newcomer, but he’s already shown an ability to rise to the occasion and a flair for the dramatic that makes it easy to see him doing the same this weekend.

“I didn’t know I would be the first fight of the season until fight week, when one of the fights got dropped because of COVID,” Fletcher said of his fight with Leonardo Damiani that opened Season 5 of Dana White’s Contender Series last August. “Once I realized I was going to be in that No. 1 slot, I was pumped.”

After touching gloves, the welterweights got right after it, with Fletcher working from the outside, picking with single shots and chopping at Damiani’s lead leg. A minute in, he swiftly changed levels and put the Italian veteran on the deck, with Damiani working his way back to his feet and into space.

With the Italian circling stationed with his back to the fence and standing flat-footed, Fletcher launched into the air and planted a perfect knee on Damiani’s chin, ending the fight and kicking off the season in spectacular fashion.

“There are always some nerves going into a fight, 100 percent,” said Fletcher, who pushed his record to 9-0 with his contract-winning victory. “But it wasn’t anything over the top. Each fight, if you’re doing things right, is generally the biggest fight, and it didn’t feel like anything out of the ordinary; it felt like what I expected.

“Having all eyes on you in your job interview for the thing that you’ve been dreaming about — it feels like that,” he added with a laugh. “If you could think of a feeling, it would feel like that, but once you take a second to think about how you got here and what you did to get here, the work you put in and all that, it’s kind of reassuring. The nerves are part of the game, just like getting punched in the face.

“I belong here, so I was just excited about the opportunity.”

Along with the perfect professional record through nine appearances, another part of the reason Fletcher is confident he belongs at this level at this point is the amount of time he’s spent training competitors that have already forged a path to the UFC.

Flip through his Instagram page and you’ll see sweat-drenched photos alongside fellow UFC welterweights Alex Morono and Trevin Giles,  and post-training posing sessions with two of the finest to come out of his home state, retired welterweight Alan Jouban and perennial lightweight contender Dustin “The Diamond” Poirier.

“Over these last couple years, I’ve finally gotten to be around more guys at this level, be around Dustin a little bit more, and using those guys as a measuring stick, I know that everything in terms of mindset, in terms of skills, in terms of overall maturity and being able to handle certain things that come with this game, it feels like it’s all coming in the right time,” said Fletcher.

“MMA is unlike any other sport wherein I’m not in the league, I’m not in the UFC — I may be an amateur, an up-and-comer — but I can at least be on the mat with some of these guys that I perceive to be titans from TV that are untouchable. When you get to be in the same room, be on the same mats, share techniques, get punched in the face by these guys, it makes it real.

“When it makes that top level of the game real, it makes you realize these guys aren’t perfect, they aren’t super-human, they aren’t something that could never be amounted to, and that makes everything…” 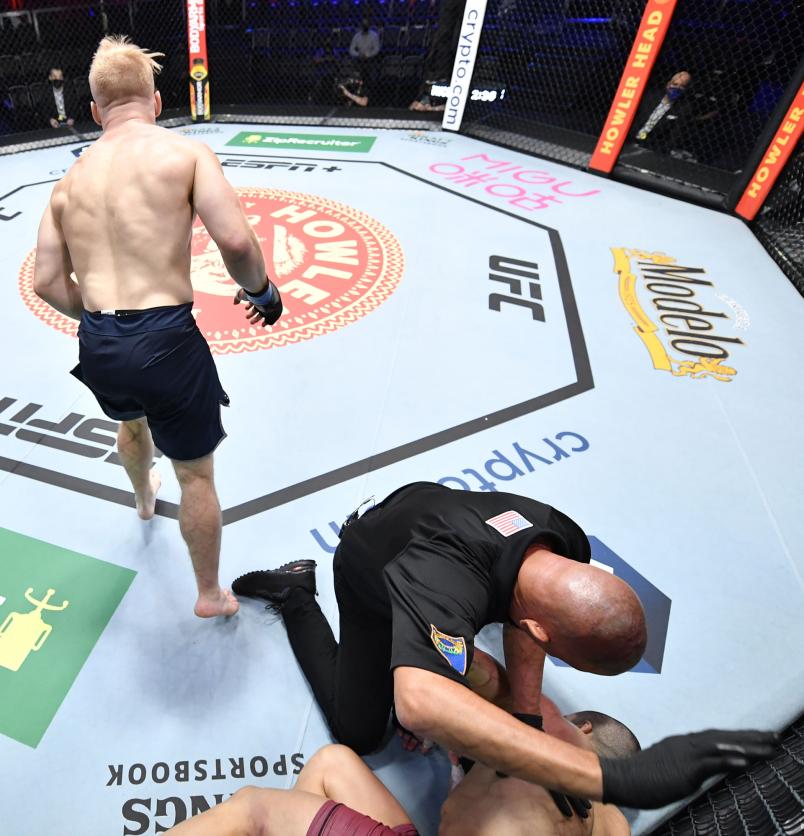 AJ Fletcher reacts after his knockout victory over Leonardo Damiani of Italy in their welterweight fight during Dana White's Contender Series season five week one at UFC APEX on August 31, 2021 in Las Vegas, Nevada. (Photo by Chris Unger/Zuffa LLC)

His words trailed off as he searched for the right way to express what he was thinking.

“When you realize your dreams are tangible and that somebody from your background, somebody who is like you has (achieved them), it has a way of erasing any doubts as to why you couldn’t get somewhere because of where you were born or what you look like or whatever.”

Having seen others flourish on the biggest stage in the sport, Fletcher is ready to do the same himself, beginning this weekend with his explosive pairing with Semelsberger.

A former collegiate football defensive back who is still in the “figuring everything out” stages of his fighting career, the 29-year-old Semelsberger has already shown he likes to get after it, and the potential for getting pushed by the heavy-hitting Marist College Red Foxes star has Fletcher counting down to Saturday night.

“Matt’s gonna be in there and he’s gonna be ready to take my friggin’ head off and I’m looking forward to it,” he said excitedly about sharing the Octagon with Semelsberger, who registered a 16-second knockout win over Jason Witt and a 15-second knockout win over Martin Sano Jr. in 2021. “I’ve been telling my coaches: there might be a little something not sadistic, but just f***ing weird (about me) because I want to meet the version of me from across the world. 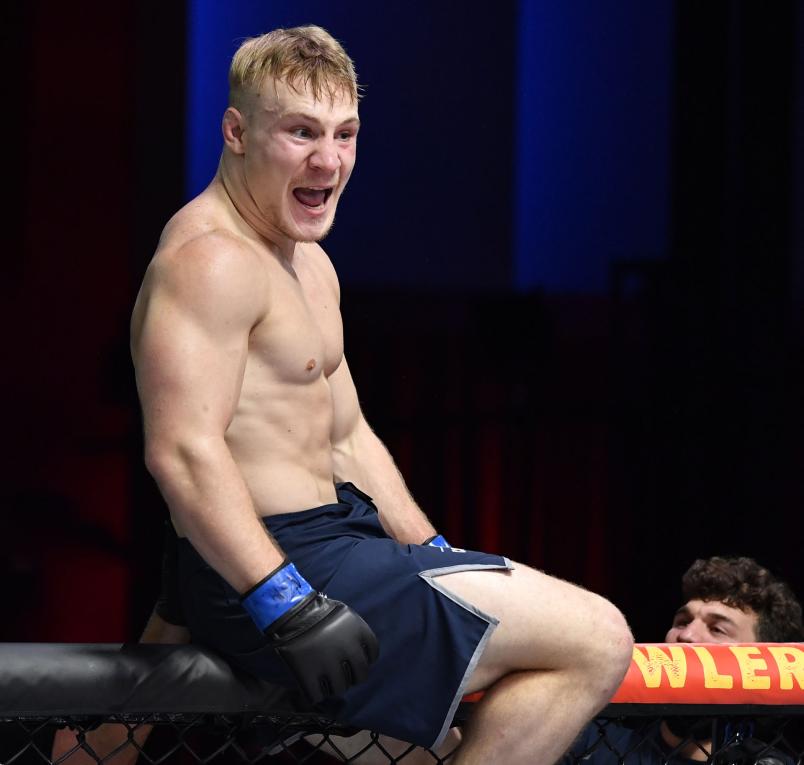 AJ Fletcher reacts after his knockout victory over Leonardo Damiani of Italy in their welterweight fight during Dana White's Contender Series season five week one at UFC APEX on August 31, 2021 in Las Vegas, Nevada. (Photo by Chris Unger/Zuffa LLC)

“I thought Leonardo was going to do that on the Contender — that one ended up going shorter than I thought — but I think Matt is a good candidate to bring that out. He’s got good technique, he’s got a great frame, he knows how to use what he has, and he brings the fight.”

Brimming with confidence and trusting in his talents, Fletcher has spent the last three weeks visualizing this weekend’s fight in every manner possible — quick wins and gritty wins; grimy battles, bad sports, and everything in between.

He believes he’s ready to handle whatever Semelsberger sends his way and is ready to make a splash in his debut, but he also knows that it takes more than a single splash to really make waves in the UFC welterweight division.

“That being said, even if the fight does go terrifically my way and I get to show everything I want to show, I know there is more work to be done. It’s a splash and that’s it; you’ve got to keep making those ripples and knocking them out.

“Hopefully this fight goes well and I can get in there pretty quickly and make another splash.”