An actor and commentator, Felder still a fighter at heart 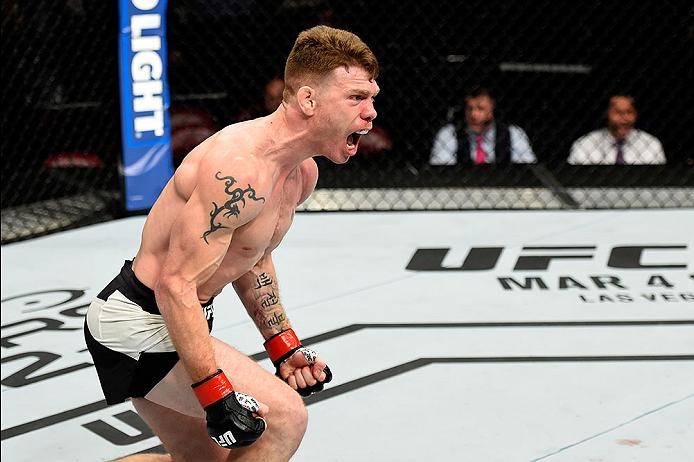 It’s been a heady time for UFC lightweight Paul Felder. Owner of a two-fight knockout streak and scheduled for a highly anticipated bout against Charles Oliveira this Saturday in Detroit, Felder has also been receiving rave reviews for his jump into the world of UFC commentary. That’s no surprise, because when he’s on the microphone, he’s not just an analyst, but a fan and a fighter.

“I know I was an actor and I know I’m a commentator now, but at the end of the day I’m just a scrappy, red-headed kid from South Philly that likes to fist fight too,” he said. “Competing has been in me since I can remember, whether it was football, soccer, baseball or fighting.”

So when Felder is there with the headset on, there’s the palpable feeling that if someone tripped on the way to the Octagon and a fighter was needed to step in, he would do it. You can hear it in his voice, and he admits that his work in the broadcast world makes him appreciate his day job even more.

“I get to see the fighters’ walk to the cage over and over again and how they handle themselves,” he said. “It makes you get back and enjoy it and you notice the guys that are taking it in and are in the moment and the guys that are in their head and maybe a little nervous and terrified. It’s what we do every day. You go in there and have fun and let it go and what’s gonna happen is gonna happen. You don’t get to step in front of 15-20,000 people and fight and live the dream every day, so it makes you appreciate what you’re doing.”

So while he’s enjoyed the commentator’s gig and can’t wait for the next one on December 9 in Fresno, he is looking forward 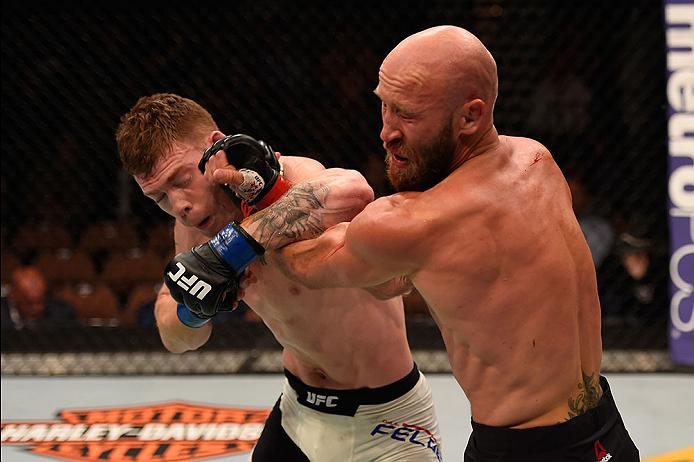 to putting the gloves back on this weekend; like really looking forward to getting into the Octagon and building on his pair of 2017 knockouts over Alessandro Ricci and Stevie Ray.

“I can’t tell you what’s gonna happen on December 2nd, but I can tell you that is one hundred percent for sure that this is the best martial artist that I’ve been in my life,” said Felder. “Going to Roufusport gave me a new hunger to train and learn again. I feel like my jiu-jitsu and grappling is better than it’s ever been and I just feel like I’m finally well-rounded everywhere and hitting much harder than I ever have in my life. I feel like I’m more precise, and I feel like I have a connection with a head coach that I’ve lacked most of my career.”

This fight will be his third under the tutelage of Duke Roufus, and given the results of the first two, it’s clear that Felder has a fire lit under him like never before. That’s a bad sign for Oliveira and the other future opponents of “The Irish Dragon,” but a good sign for a fighter who has had a 2017 filled with ups and downs. The ups obviously being his 2-0 record and his new commentating gig, the down being the passing of his father due to pancreatic cancer.
RELATED: UFC 218 Fight By Fight Preview | Order The UFC 218 Pay-Per-View | UFC 218 Tickets

“It was a year of learning, that’s for sure,” Felder said. “Career wise, it couldn’t go any better. Personally, I had a lot of stuff go on other than my dad, and the father stuff made it even worse, but I feel like it brought the family I do have even closer together because we got to see what he had to go through and I just try to remember all those moments when he was at home near the end. I remember that every time I fight.

“So it was horrible, but I feel like in the long run it will just be fuel for the fire and motivation to do what I love, and that’s what I’m doing,” he continues. “So win, lose or draw, as long as I embrace that walk and go out there and have fun, that’s all that matters.”

It’s a healthy outlook on life, and one Felder’s dad would undoubtedly be proud of. Now all the fighter has to do is fight. The next week he’ll talk about the fights, and somewhere in between he’s going to put his 2008 Ford Fusion out to pasture and pick up a new ride.

Sounds like a good way to end the year.