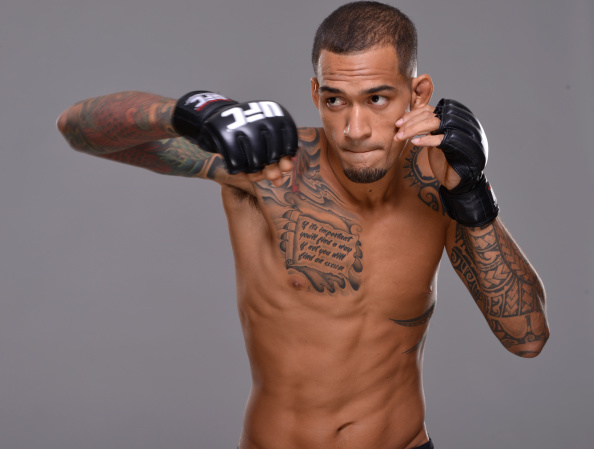 Certain cultures have been known to produce distinctive traits in the fighters they deliver. Mexican fighters are recognized for their gritty, forward-pressing resilience, just as those in the Far East have developed rangy technical games as their trademark. The same process has begun in the Hawaiian islands, where a different breed of fighter has been emerging over the past two decades.

What began with a young jiu-jitsu prodigy turned two-divisional UFC champion in BJ Penn has evolved into a new generation of Hawaiian warrior…all who embody the same fighting spirit as their legendary predecessor. Of that collective, Yancy Medeiros has been at the front of the pack, proving once again there is an extra amount of scrap to be found in the foundation of what makes fighters tick in that region.

“It feels great to be a part of this Hawaiian movement and we are very proud fighters,” Medeiros said. “I was in high school when BJ [Penn] was doing his thing, and seeing him have so much success being from Hawaii made me believe that I could do it too. I have Max [Holloway] who is a good training partner back at home and we really help push and build one another. We just try to represent Hawaii the best we can and it’s been working.”

Where Medeiros initially struggled in the early stages of his time on the sport’s biggest stage, the 27-year-old Skrap Pack representative has certainly found his groove as of late. He’s notched back-to-back victories inside the Octagon, with his most recent performance resulting in a submission victory over Massachusetts native Joe Proctor at The Ultimate Fighter 20 Finale back in December.

The first-round finish over the Joe Lauzon protégé was the first sign that Medeiros was gaining traction under the bright lights, and now that it’s happened, he has no plans of slowing down anytime soon.

“It’s always that much more motivating when you are winning,” Medeiros said. “Winning fights keeps me fired up and anxious to get the next one. You want to keep that wheel rolling and you just keep working hard in the gym to get ready for the next fight.”

And where things are concerned in that regard, Medeiros’ next step into the Octagon will be a guaranteed throwdown. The surging lightweight will face former featherweight contender turned 155-pound striker Dustin Poirier this Saturday when the UFC returns to New Orleans.

Not only is the matchup a pairing between two fighters who are known to keep their respective gas pedals to the floor from start to finish, but the tilt will come with an added element being that it takes place in “The Diamond’s” home ground of Louisiana. Where having to fight in front of a hostile crowd may be enough to shake some fighters, that’s not how Medeiros is built.

He’s ready and willing to go into enemy territory to get what he believes is his, and he is looking forward to silencing the crowd with his performance.

“[Poirier] is a game opponent, man,” Medeiros explained. “I know he’s coming in there to fight and I love that. I love fighting guys who are going to bring it and I know that’s what he’s going to do. He’s going to want to knock my head off and I feel that brings the best out of me. I want to give everyone a show and represent Hawaii and my teams both there and in California. I am there to entertain, but I’m also there to finish my opponent. And that’s what I’m going to do.

“I always want the odds against me,” he added in regard to fighting in the bayou. “It’s going to be great. I’m probably going to get booed a bit, but I’m there to eat. I’m there to finish him and eat. I don’t care if the fight is in New Orleans, that’s what I’m there to do. Hopefully I will have a good performance, start a trend, and we can get the UFC to Hawaii. I’ve fought in other people’s hometown and now I would love to fight in my own backyard. That would be a dream come true.”

As Medeiros continues to display an ever-growing skill set inside the Octagon, he credits each and every step of his progression to those who keep his personal evolution running full throttle. When he’s not back home training in Hawaii, the versatile lightweight moves stateside to train with one of the most renowned collectives in all of mixed martial arts.

Working alongside a murderer’s row of former champions and title challengers in Northern California has Medeiros feeling he’s ready and able to take on the best the world has to offer because that’s what happens when you’re grinding it out against fighters like Gilbert Melendez and the Diaz brothers in the seemingly endless cycle of a professional training camp.

That said, once the training cycle has passed and Medeiros has a new arsenal of weapons to showcase, he turns his focus to using them to the full capacity against whoever steps into the Octagon with him. This Saturday night it will be the American Top Team representative, and Medeiros is confident he will spoil Poirier’s long awaited homecoming.

“I train with the best mixed martial artists in the world, and when I go in there I believe I have to show how much my training has improved me as both a person and a fighter. I get to go with Gilbert Melendez, Jake Shields and Nick and Nate [Diaz] every day. I can’t ask for better training than that. I also have great Sambo coaches and just an all out great team in California. I represent this team even in Hawaii. I walk out to Nick Diaz Academy because that’s who I pay homage to, but I still represent Hawaii through and through. I’m ready to go, and it’s going to show on Saturday night.”