'Wonderboy' hopes to leave Liverpool with a win & some new fans 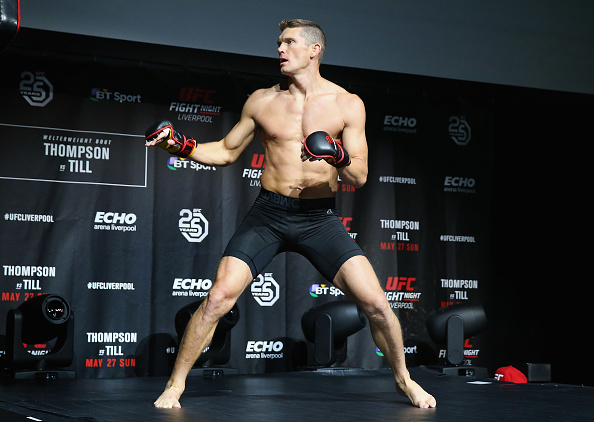 One would assume that after 57 kickboxing matches and 17 pro MMA fights that Stephen Thompson has – at least once – been the guy with the black hat being booed by fans hoping he gets beaten by a hometown hero.

“No, I haven’t,” laughs Thompson, who will certainly see that record of civility broken on Sunday when he faces Liverpool’s Darren Till in Liverpool. Now don’t get “Wonderboy” wrong; he hasn’t had a career full of home games. It’s just that, well, how do you boo this guy?

“I’ve been in enemy territory before, but…”

They still loved you?

“They still loved me,” he laughs. “I fought Rory MacDonald in Ottawa and I still had people cheering me on there. And I’ve got a few people coming to Liverpool, so it’s not just gonna be me there. I’ve got my family, I’ve got some friends coming, and I’m gonna walk out there in that arena and they’re gonna be booing me, but I’m gonna walk out with a smile on my face. I’m gonna eat ‘em up with niceness.”

As this interview is taking place a couple weeks out from fight night, Thompson, the No. 1-ranked welterweight in the world, is a week removed from having to reschedule due to karate camp taking place at his family’s school, Upstate Karate in Simpsonville, South Carolina. That means in addition to training for Till, Thompson is teaching, driving a school bus and fielding questions from kids who know him not as “Wonderboy,” but Mr. Stephen.

They do know what Mr. Stephen does for a living, though, and they’re not above commenting that he got beat up over the weekend when he comes in after a fight with a black eye. If anything can keep someone grounded, it’s moments like these, and it’s why there’s really no chance of him ever getting to a position where his ego becomes bigger than his talent.

So he can win fights, get a higher profile and even sign on with IMG Models, and he’s still going to be Mr. Stephen during karate class. But this weekend, there’s a fight to be fought, and Thompson is not only going into the Liverpool lion’s den, but he’s risking that number one ranking against a hungry opponent who would love to take his spot.

But that’s not why he wasn’t initially interested in meeting Till this weekend. It had more to do with his place in the welterweight division.

“It’s kind of weird,” he said of his current status at 170 pounds. “And it’s one of the reasons why I didn’t take this fight to begin with. One, I had two broken thumbs and two, I kind of wanted to see where the division was going. There was a rumor of an interim title and I wanted to see if I was at the top of the list for that. But since that’s not happening, after this fight I’m gonna have to sit back and see what happens from there and who’s gonna be fighting (champion) Tyron (Woodley) next and who wins.”

Thompson has fought the king of the division – Woodley – twice, battling to a Fight of the Night draw in November 2016 before losing a majority decision in their rematch in March 2017. And while he retains the number one contender’s spot, the less than scintillating rematch has left few clamoring for a third bout right now. Then there’s the interim title being fought for by Rafael Dos Anjos and Colby Covington next month in Chicago, with the winner of that fight presumably getting the next crack at Woodley.

So where does that leave Thompson?

“I think it really depends on A) how I go out there and defeat Darren Till and B) who fights Tyron next,” he said. “You’ve got the interim title coming up between RDA and Colby Covington and I think whoever wins that, if they beat Tyron Woodley, then I’ll get that next shot. If Tyron wins, I think I may have to fight one more time in order to seal that deal for that next shot again.”

Thompson vs Covington, just to see “Chaos” turn his trash talking attack on the nicest guy in MMA?

“He can say stuff about me but it doesn’t get to me one bit,” laughs Thompson, who is focused on Sunday, Darren Till, another victory, and maybe an extension of his “no boos” streak.

“Hopefully after this fight, I won’t only leave with a win, but with some fans along with it from Liverpool,” he said.

Then it’s back to karate class next week.