Willie Gates: Bringing the Buzz Back 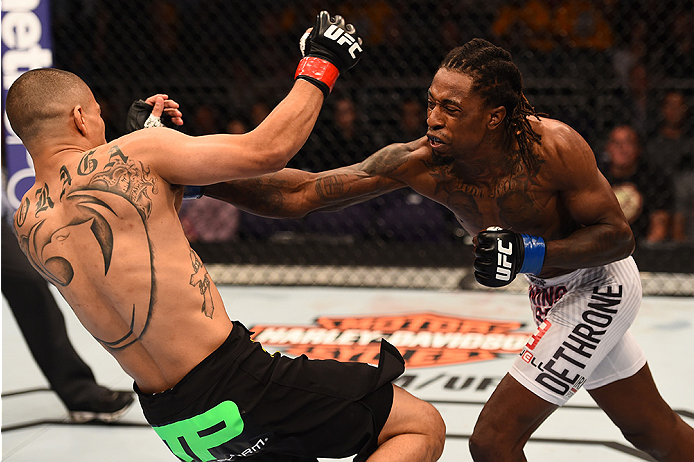 Fontana, California’s Willie Gates is well aware that while there are plenty of fight fans out there that love the intricate chess game that is mixed martial arts, others just want to scream “KO” from the rafters.

If you’re one of the latter group, then Mr. Gates is your man. Why? Eight finishes, five knockouts, and six wins under 90 seconds. His mindset?

“It’s the mindset of me going in there to whoop ass,” he said. “That’s how I got that nickname – I can go in there, whoop ass, and go home.”

The way Gates sees it, that attitude serves more than one purpose. Of course, there’s the selfish purpose, where the more he wins, the more money he makes and the more successful his career is. The other is more altruistic, as he believes that a little element of danger when he steps into the Octagon will do wonders for the profile of the UFC’s flyweight division.

“We’re not really known for knockouts or exciting fights,” he said of the 125-pound weight class. “We’re really just known for a fast pace, being energetic, and blah, blah, blah. I want to put that stamp on it that 125ers like myself, we do have knockout power and we are exciting, so we should be well-known and we need this recognition and I’m the guy that’s gonna want to give it to them.”

Hang on, he’s just getting warmed up.

“We don’t have that buzz,” Gates continues. “There are really no knockouts, and that’s what the average fan wants to see. 125 doesn’t have that buzz and we need somebody to give us that light.”

Is Gates the guy?

“I’m trying to be the guy,” he laughs. “I’m coming in with the mindset that I’m trying to change the game for the 125ers.”

Preparing for his next fight, a Sunday tilt with Darrell Montague, Gates is in a good place to make a statement, as the TUF 21 Finale card wraps up International Fight Week in Vegas. With a win, he will move to 12-6 as a pro, but more importantly he will even up his UFC record at 1-1 after a short notice loss to John Moraga last December. Gates acquitted himself well against the number six-ranked contender, but he admits that it wasn’t the best “Whoop Ass” Willie in the Octagon that night.

“I wasn’t too nervous, but I wasn’t really myself either, so I can say, in a sense, that I did have a few jitters just because of the whole territory and me actually accomplishing my dream and actually being at the highest level of competition,” he said. “My mindset was that I was happy to be there. I felt happy, I felt that I worked hard to get there. Now my second fight, I know I belong here and I’m going to show you guys why.”

To even be talking about his second fight in the UFC, Gates has come a long way, especially when you figure that he started his career out at 0-2. It’s a misleading stat, as those losses came to UFC vet Robbie Peralta and Octagon newcomer Jimmie Rivera, but still, he admits to some doubts.

“I’d be lying if I said ‘no.’ Of course you’re going to have doubts. Nobody wants to lose and nobody wants to start a career that they think they’re good in at 0-2. But I went back to the gym, I worked hard, I worked on the things that I needed to work on, and look at me now.”

He also has no regrets about the road he took to get here.

“I didn’t want to have this 10-0 record and then fight somebody who has a 10-0 record and not be ready,” Gates said. I’m trying to make a living out of this and a career, I chose a very good path that I’m glad that I’m on now, and it’s all the way up from here.”

“It’s gonna be a good fight. I’m actually fighting my ex-teammate, so he knows what I have and I know what he has, but I’ve been working real hard on expanding my game, and every time I step into that cage, I don’t want to be the same fighter. I want to show you something different every single time, so you’ve got to switch up your game plan. I just want to bring excitement to the division; that’s all I really want to do.”