"Now the UFC will see why I am one of the best in the division." - Jussier Formiga 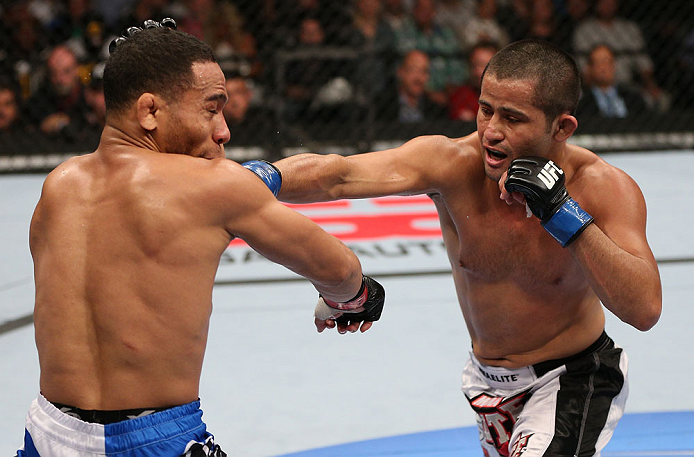 Sometimes the best answers are the simplest ones. At least it was for flyweight contender Jussier Formiga, who shook off a loss in his UFC debut to John Dodson in October of 2012 not by changing champs, taking on some new diet, or revamping his style. Instead, he went back to the Nova Uniao gym he calls home, and put his gloves on and his mouthpiece back in.

“I kept my head up and trained harder,” he said through translator Eduardo Perdigao. “Now the UFC will see why I am one of the best in the division.”

The organization and its fans got a taste of that in May, when Formiga got back in the win column with a three round decision over Chris Cariaso, reinforcing the fact that the Rio Grande Do Norte native is one of the top 125-pounders in the game. Plus, he got to do it at home in Brazil, which might have been a pressure cooker for some, but not for him.

“It was Amazing,” said the decorated Brazilian Jiu-Jitsu black belt. “I knew that I had to win and to fight in Brazil was incredible,” he said. “I actually felt more pressure in my first fight in the UFC. It’s the main MMA event in the world and everything is huge. In Brazil though, I was very well prepared and near my family and friends.”

Such success and ease at fighting at home bodes well for his next Octagon appearance, a pivotal bout with top contender Joseph Benavidez on UFC Fight Night in Belo Horizonte this Wednesday. Describing his foe as “well-rounded and used to fighting in the UFC,” the 28-year-old Formiga could shake things up considerably in the division should he upset Benavidez. How much? It could just propel him into the title picture, something that has crossed his mind, even if only for a moment.

“I hope so,” said Formiga when asked if he sees a win over the Californian earning him a shot at champion Demetrious Johnson. “But now I’m focused on Benavidez.”

A wise call, especially given Benavidez’ talent, track record, and ever-improving striking under the eye of Duane “Bang” Ludwig. But Formiga gets plenty of high-level work in the gym himself, and not just from coach Andre Pederneiras, but from an all-star cast that includes two UFC champions.

So what does he take away from working with the UFC’s featherweight (Aldo) and interim bantamweight (Barao) champions?

“Keep cool and put my game on the table,” said Formiga, who gets his chance on Wednesday. As for the future, does he see himself becoming Nova Uniao’s third UFC champion?

“I will get there. But first I need to win against Benavidez.”