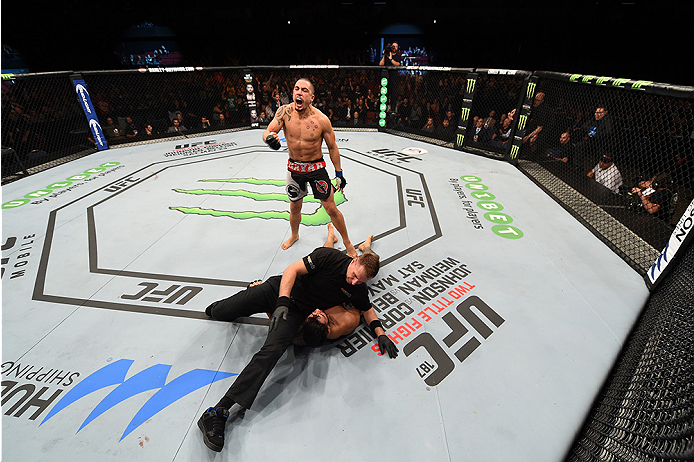 As far as Robert Whittaker is concerned, worrying about what the fighter across the Octagon from you might do is his opponent’s job.

So middleweight Whittaker wasn’t bothered when he learned that Uriah Hall would replace an injured Michael Bisping for his fight this Saturday (Sunday Australian time) at UFC 193.

“I think they’re (both) dangerous,” he said. “Uriah is definitely dangerous in some aspects as Bisping is dangerous in others. When the opponent changes it doesn’t really affect me much because I’m not too worried about who I fight. I just go out there and I fight who they give me and I’m going to go out there and implement my game plan and let my opponent worry about that.”

And as exciting as unorthodox knockout artist Hall can be, 24-year-old Whittaker hasn’t seen many of his fights ahead of their clash at Melbourne, Australia’s Etihad Stadium.

“I don’t do a lot of research into my opponents. My coaching staff really does the research; that’s what they’re there to do. Research, analyze and help me tweak my game. I’ve seen a couple of fights and that gives me something to visualize, but apart from that I don’t really watch too much.”

At least on the surface, Hall and Whittaker differ dramatically in their mental approach to fighting. If Hall has had a weakness, it might be self-doubt. Or maybe he’s just more candid about doubt than other fighters. The talented runner-up on The Ultimate Fighter 17 has sometimes failed to live up to the immense hype behind him. Hall has been open about his struggles with the psychological side of fighting, but now with a TKO win in his last fight over highly touted Gegard Mousasi, he seems to have a newfound confidence.

If The Ultimate Fighter: Smashes winner Whittaker has ever doubted his abilities, he hasn’t shown it. Since his earliest interviews on TUF, Whittaker has always seemed completely self-assured, confident that he is destined for greatness. He’s also proven himself to be a fighter who can rise to a big occasion.

“I think my mental game is an advantage I have over everyone. I fight better than I spar, I fight better than I train. When I get in there, I truly display my skill set and I thrive in the moment. My mental strength now is at the highest it’s ever been. I’m in a really good place, and whether that’s his weakness or my strength is irrelevant.”

But while there’s never been a visible dent in the confidence of Whittaker, he’s still human, and he’s had to adjust to the enormous pressure that comes with fighting. As much as possible, he now tries not to focus on the outcome of his fights.

“Winning and losing are just results from all the work,” he said. “I’m starting to look at the pieces that get me to the fight more so than the fight itself. If I get a win, it will be because I have grown during the fight camp. It’s really helped me in a bunch of different ways, getting my head around the fight pressure and helping me focus on where I can go with this.”

Whittaker has been on an impressive run, with three wins in a row, including a KO victory over Brad Tavares in his most recent fight and a TKO win over Clint Hester. It’s a long way from losing two fights in a row in 2013-14, which signaled to Whittaker that it was time to make some changes.

Whittaker reinvented his training, leaving the famous Tristar Gym and returning to his roots under his first martial arts coach, Henry Perez of PMA in Sydney.  Whittaker also moved up from welterweight to middleweight after the cut to make the 170-pound limit became too difficult.

The changes have paid dividends, and his win streak has seen UFC President Dana White single him out as a fighter to watch.

But at his lowest, did he ever worry he might suffer three losses and jeopardize his UFC career?

“I think getting cut is always present. It’s always something everyone who has a job thinks about at one point. But fighting’s what I’m meant to be doing. Whether I have my ups and downs, it’s just part of the sport, but I know I’m an elite athlete and an elite fighter, this where I want to stay and I think I’ve made that clear.”

That brief slump, however, now seems in the distant past.

Things have also changed in Whittaker’s personal life, and he and his wife recently welcomed the birth of his first child, a son named Jack. With that added motivation, he now has the opportunity to build on his momentum with a win on Saturday.  He’s looking forward to doing it in front of a huge Australian crowd.

“I have a bunch of friends and family coming down to watch. It’s an honor and privilege to fight in my home country again, and there’s no better feeling. It truly is one of the highlights of my career.”

When it comes to pre-fight predictions, Robert Whittaker is consistent. He typically states that he is going to come out guns blazing and look for a knockout. And he’s usually a man of his word.