"I know I didn’t give a good performance against Lawlor. I took the blame, and after that I changed a lot of things in the training around me and my training lifestyle." - Patrick Cote 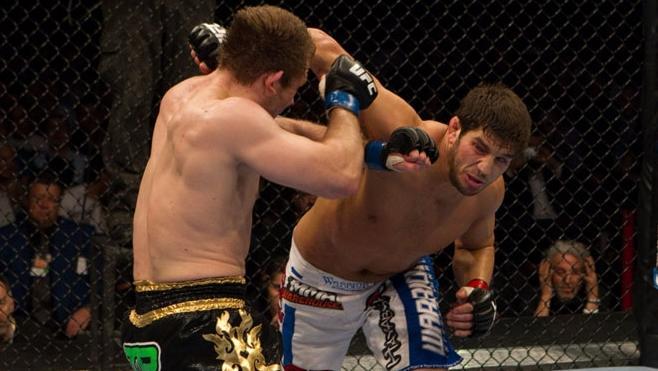 Patrick Cote’s absence from the UFC after a 2010 loss to Tom Lawlor may only show a little over 20 months, but for the Quebec native, it felt so much longer, especially when you realize that the former Ultimate Fighter finalist was at practically every show doing French language commentary. That was tough.

“Yeah, for sure,” said Cote. “I’ve got a good relationship with the UFC and I’m doing all the shows in French as the official French voice of the UFC. So I was still part of the organization, and I love what I’m doing on TV as a commentator, but I’m still young and I wanted to be more inside the Octagon than outside.”

But despite the new broadcasting gig and his work as the owner of a nutrition company, at heart Cote was still a fighter, so he wasn’t going to sit around waiting for a call to return. He was going to keep fighting and keep winning until the UFC couldn’t ignore him anymore. And it worked, so after going four for four in his post-Lawlor stint, he got asked back to the organization to face Cung Le this weekend on the UFC 148 main card. Who said there are no happy endings in the fight game?

“With the four wins in a row I had an idea that maybe I would receive a call from the big show, but I didn’t expect to be back in a big, big fight like this on this biggest card of the year on the main card right away,” he said. “So I was kind of surprised at the kind of fight I’m having, but I was pretty confident of getting back in the UFC.”

That’s the condensed version. But like any great comeback, there’s a fall and a rise. For Cote, his fall began at 39 seconds of the third round against UFC middleweight champion Anderson Silva in October of 2008, when a knee injury forced him out of the bout. The loss snapped a five fight winning streak and put him on the shelf until May of 2010. When Cote was finally healthy, Alan Belcher added another loss to his ledger with a second round submission at UFC 113. Five months later, Cote was listless in a three round decision loss to Lawlor.

What happened next was expected, though that didn’t make it any easier to digest.

“When I received my papers after the Tom Lawlor fight, I wasn’t surprised, but it’s never fun to get fired from something, especially the UFC because it’s the biggest organization in the world,” said Cote. “It took me a couple of weeks just to get back on my feet, and I was like ‘okay, what do I want to do?’ I spoke to my team, I spoke to my family and my wife, and I was still enjoying fighting and training, so I got back into the gym, changed a lot of things, and after the win against Kalib Starnes, it’s like the flame inside me came back and I wanted to be back in the big show as soon as possible.”

After decisioning UFC vet Starnes in April of 2011, Cote fought and beat two more Octagon alumni in Todd Brown and Crafton Wallace before knocking out Gustavo Machado in the first round in March of this year. “The Predator” was back.

“I know I didn’t give a good performance against Lawlor,” he said. “I took the blame, and after that I changed a lot of things in the training around me and my training lifestyle. ’m undefeated outside of the UFC, so in my head I was still a UFC level fighter and I think I proved it again in my last four fights.”

And oddly enough, despite the occasional awkward feelings about being at UFC events without being a UFC fighter, Cote used his time as a commentator to build up the strategic and mental part of his game, truly becoming a well-rounded mixed martial artist in the process.

Perhaps the biggest positive for Cote these days is that with his out of competition activities, he has the security he needs to free his mind up one hundred percent for fighting. Sure, some fighters need to have that desperate ‘win or go home’ mindset, but for most, knowing that life outside the Octagon is settled makes training and fighting an act of passion, not of survival.

“Right now, if I stopped fighting, I’m not gonna change my lifestyle,” said the 32-year old Montreal resident. “I took care of my future, and it helps me to fight better because I’m more relaxed and I don’t have the stress where I have to win to put food on the table for my family. I’m okay with that.”

So with his house in order, the only thing on Cote’s mind is Le, one of the most dynamic strikers in the sport today, and a tough puzzle for any opponent to decipher. Cote isn’t so sure about that statement though.

“The thing is, he’s not doing anything new for the last couple years,” he said. “He’s got his own style, but he’s doing almost the same thing. We watched a lot of his videos, I brought some good guys to my training camp, and they’re doing exactly the same thing that Cung Le’s doing. He’s a good wrestler too, but the thing is, he likes to strike, and I think this is gonna be a spectacular fight because I know exactly what he’s gonna do, but he don’t know what I’m gonna do. My game has changed a lot since my last fight in the UFC, and if he was checking my fights in the UFC to prepare himself, he’s gonna be very surprised because I’m not the same fighter as well.”

Does that mean no more big right hands and ‘defense be damned’ exchanges from Cote? He’s remaining non-committal, though he will admit that he may show off some of the more obscure aspects of his game if necessary.

“The fans like to see two strikers exchange toe-to-toe, but at the end of the day, it’s a mixed martial arts fight,” said Cote. “For the last year and a half, I’ve been wrestling four times a week with the national team, and I knew that was my weakness. So right now if I fight a wrestler or a submission guy, I don’t care. My MMA game all around is ten times better than when I fought in my last fight in the UFC. And you never know, maybe I’ll take him down. He’s a southpaw, so his front leg is right there, and I feel pretty good.”

Patrick Cote feels pretty good about a lot of things these days. His personal life is going well, he’s back in the biggest organization in MMA, and he’s got a big fight against a big name for his return. Oh yeah, he’s got a lot of people pretty happy about him being in the UFC again too.

“I knew that I had a very good fanbase, but what I saw on the social media and everywhere on the web, that blew my mind,” said Cote of the Twitter campaign to bring him back. “I received a lot of support and a lot of people were asking to get me back, and they were almost harassing the UFC and Dana White on Twitter to have me back in the big show (Laughs). But I’m just thankful because I did my part of the job to win fights, and maybe that kind of pressure (from the fans) helped for me to get back.”