Uriah Hall Gets It

"I'm going to be ready to show up; I didn't show up for the last couple fights. I'm showing up." - Uriah Hall 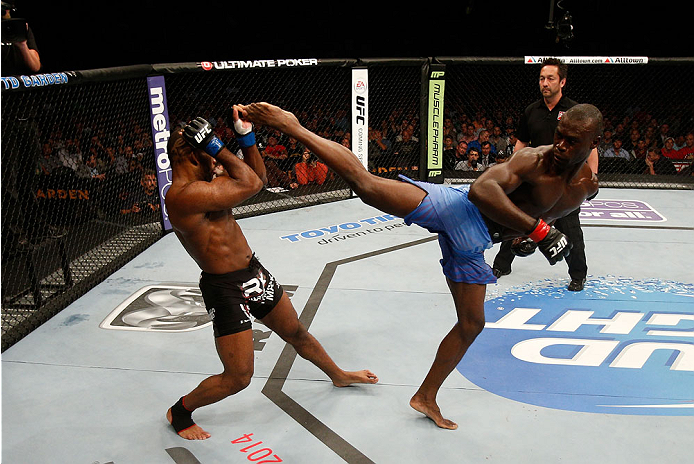 Easily one of the most praised, discussed, and criticized UFC fighters this year has been The Ultimate Fighter 17 finalist Uriah Hall. In his rookie season inside the Octagon, Hall was hyped to be the next Anderson Silva because of his highlight reel wins on the show, and then ridiculed as a bust because of two split decision losses since exiting the house.

While 2013 has been a rollercoaster ride where he has seen both the positives and negatives that fame brings, what has been lost in the shuffle is that Hall is simply a young middleweight who is learning to be the professional fighter he can be once the bright lights are on him.

“When you do something and you keep making mistakes, when it clicks you're like, ‘I get it!’” explains Hall. “I get it now. I get what I have to do when I get in the ring. I get that I can’t let certain things inside. I get that I have to destroy the person in front of me. I get it. It's finally clicked. And the best thing to do is show it.”

At 29 years old, the Jamaica-born and New York-raised striking specialist with an 8-4 pro record believes he has things figured out thanks due to some time spent in Oregon with a familiar face: Clayton Hires. “I came out to Portland to do some Rocky training and to be isolated a little bit and get my mind intact,” tells Hall about reconnecting with his TUF coach from “Team DarkSide,” aka Team Sonnen. whose home base is One MMA, which is just south of the “City of Roses”.

Most Octagon enthusiasts may only know Hires as the gruff and buff looking guy with the silver goatee holding mitts for “The American Gangster,” Chael P. Sonnen. What everyone should know is that Hires was a middleweight All-Army boxing champion and a sparring partner for one of the all-time greatest, Marvelous Marvin Hagler. In his 12 years as a professional boxer, Hires fought 28 times and holds a win over Floyd Mayweather Sr. Now Hires is in charge of returning Hall to the ferocious form fight fans fell in love with earlier this year on TUF.

“He's just been so phenomenal in elevating my game,” affirms Hall. “I have a real funky style and not everyone can really take it and put something on it. I have people either trying to change my style or make it feel weird. He's been spectacular in that sense of helping me elevate. As a coach, you need not only the physical, but the mental side. He's been helping me with that. I decided to come out to Portland because I know working on the show with him was great and being in this environment it's so freaking peaceful out here. It's pretty much like being in the house again. Just hanging out with him and living with him and him being on top of everything, we're doing some old school Rocky training and I couldn't ask for anything better. I'm excited to have him in my corner.”

It wasn’t so much his split loss to Kelvin Gastelum in April’s TUF finale that displayed this mental departure for Hall as it was the August split decision loss to John Howard. The performance was puzzling to say the least, with Hall shooting for a takedown in the opening moments of the bout. Billed as a striker’s duel, the owner of TUF 17’s Knockout of the Season, and probably the most devastating KO in show history, did not appear interested in exchanging spinning hook kicks as many expected. On TUF, Sonnen warned Hall about overthinking what he was going to do in a fight and, seemingly, that’s what Hall did.

“What happened was I literally felt like a wrestler,” states Hall. “Like a ground guy. That's why I'm out here in Portland to get that back. For me, I was always told to look at your weakness and make it your strength and I focused so much on my weakness that I forgot about what I was good at. One of my buddies brought to my attention that I was trying to recreate something that I'm not and that's exactly what I was trying to do. In my mind, I was saying that I'm a complete fighter, but I was forgetting what my bread and butter is. I'm not one to make mistakes, but when I do I learn from them, move forward, and get better.”

And there isn’t anyone better to have a triumphant return to fist and feet fighting with than “The Crippler,” Chris Leben. “I am actually excited to get in there with Leben and I'm expecting fireworks,” says Hall, who admitted to being a fan of Leben’s when he appeared on the first season of TUF. “When I got the call, I was like, 'oh crap, really?' It's about just putting feelings aside and being professionals. It's the hurt business.”

In sunny Las Vegas, Nevada at UFC 168, a middleweight melee will take place between the hard-headed and heavy-handed Leben and the slick, quick, and ready to kick Hall. With a pro record of 22-10, including 21 bouts inside the Octagon, “The Crippler” is still a dangerous competitor, with most of his opponents avoiding the intense exchanges that Leben welcomes and have made him a fan favorite. Now training with Alliance MMA in San Diego, California, Leben has been on a three fight losing skid, but has been battling ring rust by only fighting once a year for the past three years. In his last performance, a split decision loss to Andrew Craig, Leben pushed the pace per usual with big punches and a surprising amount of takedown attempts.

“I know Chris is going to come forward and I know he's been saying that,” asserts Hall. “Only thing I can say is, 'Come at me, bro.' (Laughs) I don't think I could ask for better target practice than that. You come forward and you don't move your head, that's perfect. As far as pressuring me, he doesn't know me, he hasn't fought me before. I know I'm fast and he's going to have to catch me. Even if he catches me, I am going to hit him. I can hit him from anywhere. I can just pop him with everything I got. I want him to come at me; I'm looking forward to that. When he said that, I was like, 'Perfect!'”

Making his third trip to the Octagon inside the calendar year, Hall has made his preparations with Hires as well as done work with Mark Munoz’s team at Reign Training Center in Orange County, California. While Hires takes care of Hall standing, a huge asset for his ground game has been Jason Manly, a Brazilian jiu-jitsu black belt under Cesar Gracie. “It's about trying to find people who can take your style and boost it up,” says Hall, who is ready to unveil himself as this new and improved fighter with a dramatic win over Leben.

And what would that win over “The Crippler” mean to Hall?

“It would just shut everybody up,” answers Hall. “And get me back on that ladder. It's just a ladder. You fall off it and you get back up. The losses will make you appreciate the wins more - it's just a growing experience. I don't like being caught up in all the BS, and it's just that - BS. There have been people who have been through this in life, who have been through this storm, and it's all about perseverance and not allowing that stuff to get to you. For me, I was just sensitive in that area. I'm learning. I'm a sponge and I'm learning and I get it. It was a problem and I'm fixing it. I'm in the best shape of my life, my head is exactly where it needs to be, and all I need to do is pretty much give the beating of the year. And that will shut everyone up.”

This Saturday, Hall looks to silence the critics by tangling with Leben. “Expect Uriah to show up, that's all I'm saying,” declares Hall, who believes he’s found the remedy, the antidote, and the cure for what has ailed him and on fight night he’s going to prove it to us all. “I remember calling (UFC President) Dana (White) the next day after that loss and saying, ‘I got it. I know what I got to do and I'm fixing it.’ I'm going to be ready to show up; I didn't show up for the last couple fights. I'm showing up.”

Sounds like it’s about time for everyone to jump back on Hall’s war wagon.