The Underdog No Longer

In another time and place, Matt Brown and Robbie Lawler probably would have been the best of friends. Both are no nonsense individuals, family men, and the kind of people that like the simpler things in life. Unfortunately, in this time and place, when they meet it will be with gloves on, and you know what happens after that.

Of course, neither is bothered by such a prospect. This is the fight business and it’s what they signed up for – to fight. They’re not here to make friends, give interviews, or smile for the camera, and this approach to their life’s work has endeared them to the fans that will show up at the SAP Center in San Jose to watch them fight in a bout that will headline this weekend’s FOX-televised card.

It’s a prime piece of real estate Lawler was supposed to occupy from the first time he stepped into the Octagon in 2002 as a precocious 20-year-old knockout artist and one Brown, whose record once sat at 14-11, wasn’t expected to ever see.

But the fight game’s a funny place. Not “ha ha” funny, but odd. In movies and in mainstream thinking, guys like Brown and Lawler aren’t headliners. They’re the heroes of the hardcore, the strong, silent types who show up, do their job, and do it in relative obscurity.

Lawler’s appeal, then and now, can be easily understood when it comes to breaking down the “traditional” walls against such things though. The first time around, he was a kid straight out of high school knocking grown men out and not making a fuss about it. Years later, when he returned to the UFC in 2013, he was the veteran on a comeback, looking to fulfill the potential of those early days and producing the feel-good story of the year.

Brown was (and is) a different case though. A journeyman at best on the local scene, he was the hard-nosed Rust Belt native who survived bigger fights than those in the ring or cage. After surviving a heroin overdose and finding his peace and focus in fighting, he was the perfect person to appear on The Ultimate Fighter show, if only for his story. Brown had other plans on season seven of the reality series. He was there to win.

He lost in the quarterfinals to eventual show winner Amir Sadollah, but when he put away cast mate Matt Arroyo in the second round on the season finale card, he got that job in the UFC.

Brown fought hard to keep it too, winning three of his next four bouts before a three-fight losing streak threatened that gig. He didn’t shy away from the question about his future before his June 2011 fight against John Howard either. That’s just not his style.

“I know the reality of the situation, and it’s that if I don’t win, I get cut,” said Brown at the time. 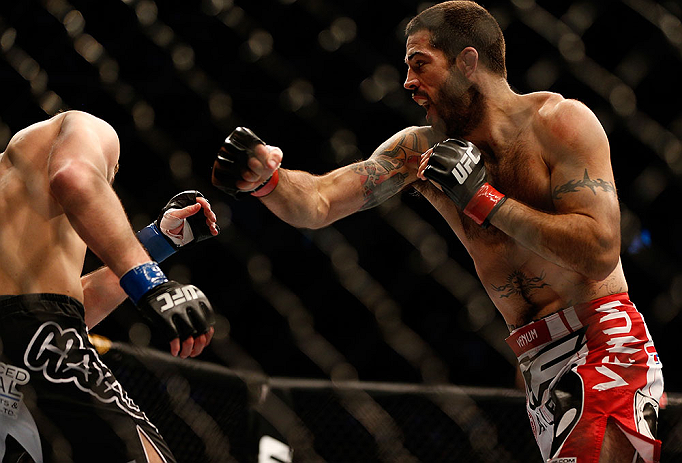 “There’s no way you lose four in a row and don’t get cut, and you don’t deserve to not get cut if you lose four in a row. I thought I deserved to be cut after my last fight (against Brian Foster), but I was blessed with another opportunity, and I’m coming into this fight like it’s my first UFC fight. This is my chance and the best thing I can do is make the most of it. I’ve already had the question a million times, is this a must win? Every fight is a must win. This one just has a different reason why it’s a must win, and it’s so I can keep my UFC contract. And even more than that, I want to prove that I belong here. I believe that I do and I believe that I’m good enough to be here.”

He beat Howard, lost to Seth Baczynski, and those questions about him belonging in the UFC lingered. Was he good enough to not just stay, but move to the next level? He knew the answer to that question; he just hadn’t found a way to convey it to his opponents and the public.

He was about to though.

Starting with an impressive, but under the radar, win over Chris Cope in February of 2012, “The Immortal” began a winning streak that currently sits at seven. Six of those wins have come by knockout, and he’s looked scarier with each passing victory. The streak has also come with four post-fight bonus checks and the reality that a win over Lawler this weekend will result in a shot at UFC welterweight champion Johny Hendricks.

Not bad for someone whose claim to fame for a long time was being the guy whose dip you didn’t pour lime juice into. And the best thing about Brown’s success is that he didn’t sell out to get to this point. He’s still known to change his cell phone number frequently (though in his defense, not recently), he loves his heavy metal, he has a sense of humor that you wouldn’t expect to get from one of the most intense fighters in the UFC, and though he’s a husband as well as a father to twin boys now, he’s still Matt Brown, occupation fighter.

If that hasn’t changed now, it probably never will. Maybe that’s why people care these days. In a fast-paced universe where the quick tweet rules over a thoughtful discourse on any number of topics, Brown remains old school to the core. And there’s something to be said for those who represent something we feel is largely lost these days. Brown, as well as Lawler, are those guys, throwbacks to an era when you let your work speak for itself. You could almost show this weekend’s fight in black and white and no one, let alone the fighters, would bat an eye.

It would only be fitting.