The Interim Heavyweight Title Fight At UFC 265 Gives Way For Ciryl Gane To Join The Club Of Undefeated Title Challengers Who Won Belts. We Take A Look Back On Those Who've Done It
By Maddyn Johnstone-Thomas • Aug. 1, 2021

Being able to call yourself a UFC champion is every fighter’s dream. Being able to say you won the belt while also having an undefeated record is just the cherry on top.

Only in the third year of his MMA career, heavyweight Ciryl Gane is currently 9-0 as he prepares to take on Houston’s Derrick Lewis at UFC 265, where the two will battle for the interim UFC heavyweight title. Before these two heavyweight elites step into the Octagon on August 7, let’s look at the undefeated fighters that came out of their first UFC title fight with a shiny new belt.

Going all the way back to the early days of the sport, Mark Coleman became the first fighter to hold the UFC heavyweight title. Heading into his bout with Dan Severn, Coleman held a 5-0 record, with all of his prior wins coming by TKO or submission. The outcome was no different at UFC 12 in Alabama. Coleman replaced Don Frye, who was originally scheduled to take on Dan Severn, but had to withdraw due to injury. “The Hammer” defeated Severn via submission (scarf-hold headlock) to become the first UFC heavyweight champion.

But before he could claim that many titles, he had to get one and that came against Maurice Smith, the then-current UFC heavyweight champion. Extending his record to 4-0 in the UFC, Couture secured the victory by majority decision to win the UFC heavyweight title. 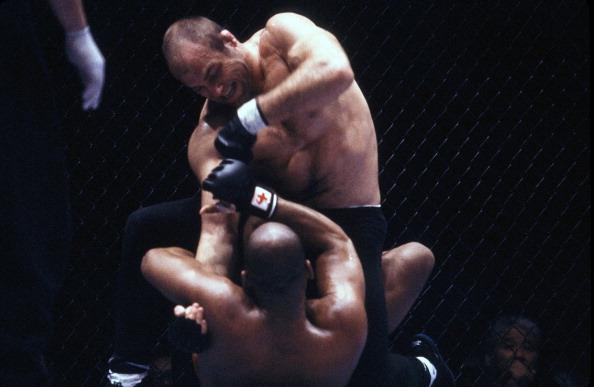 Tim Sylvia got his first crack at the title in his second fight in the UFC against Ricco Rodriguez. Coming in as the underdog, Sylvia wasted no time once the fight began, immediately throwing punches that hurt Rodriguez. The 6’8 challenger fired off punches that sent Rodriguez to the ground and ended the fight at 3:09 of round one. With the win, Sylvia extended his record to 15-0 and would become the champion once again in 2006.

Watch Every UFC Fight (And More) On UFC Fight Pass

In 2005, Rashad Evans became the winner of The Ultimate Fighter 2 and from then on, he dominated his opponents. With prior wins over Michael Bisping and Chuck Liddell, Evans was ready to face Forrest Griffin at UFC 92 for the title. The winners of the first two seasons of The Ultimate Fighter stepped into the Octagon and it was a battle, but in the third round, Evans landed a punch that sent Griffin to the ground and Evans didn’t stop throwing until the referee called it. There was a new light heavyweight champion. 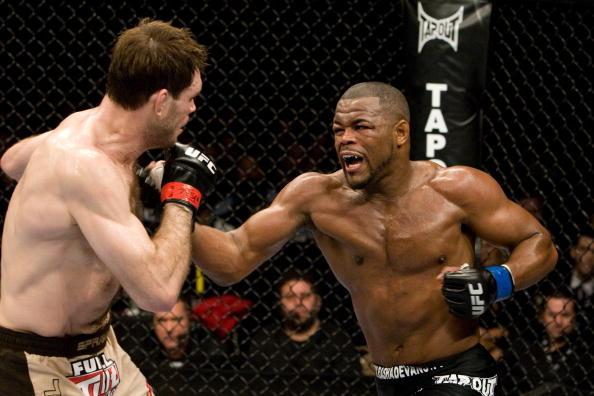 Just five months later, Evans faced challenger Lyoto Machida, who began his professional career in 2003 and joined the UFC roster in 2007. Machida defeated Thiago Silva by knockout to secure his shot for the title, and Evans didn’t hold the belt for long, as Machida defeated him by knockout in the second round. Machida would go on to defend the title against Mauricio Rua one time before falling to Rua in their 2010 rematch. 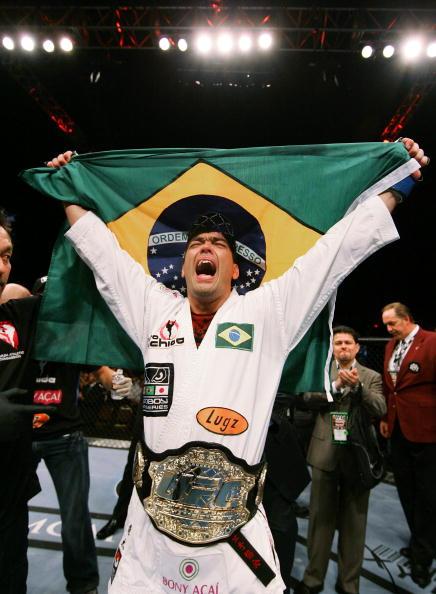 Lyoto Machida celebrates after defeating Rashad Evans (not pictured) by knockout during their Light Heavyweight Title bout at UFC 98: Evans vs Machida at the MGM Grand Garden Arena on May 23, 2009 in Las Vegas, Nevada. (Photo by Al Bello/Zuffa LLC)

Heading into his bout against Frank Mir, Shane Carwin earned all eleven of his victories by knockout or submission. The interim UFC heavyweight title was on the line and Carwin wasn’t going to let it go to a decision. In fact, he wasn’t going to let it go past the first round. The Colorado native defeated Mir via knockout to become the new interim heavyweight champion at 3:48 of the first round. Carwin’s next fight came against Brock Lesnar for the undisputed championship, where he lost by submission.

Two years after entering the UFC, Velasquez earned his chance to fight for the title. All but one of his eight wins were secured by TKO and that was the same game plan he took in UFC 121 to face Brock Lesnar. And it’s exactly what he did 4:12 into the first round, defeating Lesnar by TKO. Velasquez earned Knockout of the Night honors and was also the last undefeated heavyweight that would challenge for the belt. He would go on to win and defend the heavyweight belt throughout 2012 and 2013. 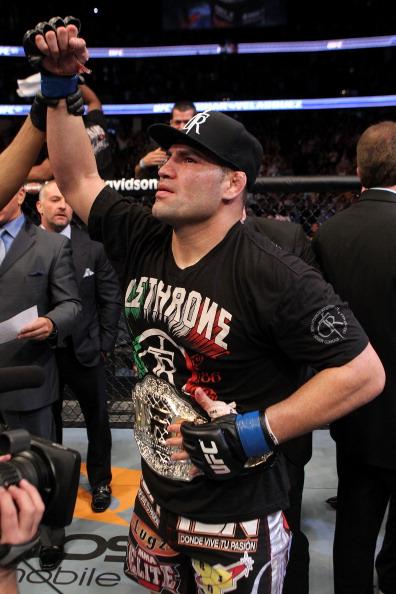 Cain Velasquez celebrates after defeating Brock Lesnar by TKO in the first round to become the new UFC heavyweight champion after their heavyweight title bout during UFC 121 on October 23, 2010 in Anaheim, California. (Photo by Josh Hedges/Zuffa LLC)

When Ronda Rousey and Miesha Tate faced off for the Strikeforce women’s bantamweight championship in 2012, it was the start of big things to come for the Olympic judoka, who defeated Tate by submission and went on to successfully defend her title once before Strikeforce held its last event in January 2013. A month before that final show, on December 6, 2012, Rousey made history when she was awarded the first UFC women’s bantamweight championship. So technically, she was undefeated heading into her first UFC title fight against Liz Carmouche in February 2013 even if she wasn’t the challenger. And for 1,074 days, Rousey continued to dominate the division, with all six of her title defense victories coming by submission, KO or TKO.

Chris Weidman’s first UFC middleweight title fight came against Anderson Silva in Las Vegas with Weidman knocking out Silva in the second round. The two would see each other again five months later, a fight remembered for Silva suffered a broken leg after Weidman checked his kick. 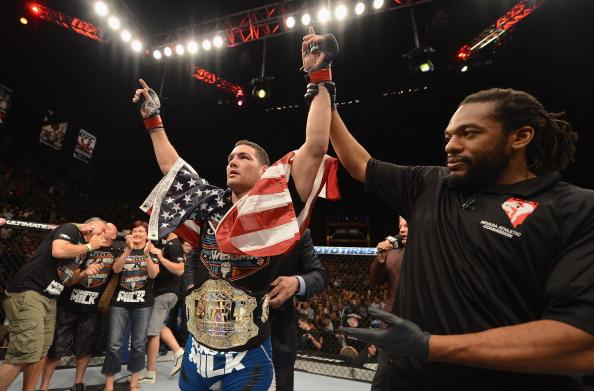 A women’s strawweight champion that successfully defended the belt for two and a half years, Joanna Jedrzejczyk joined the UFC in 2014, and eight months after making her debut, she got a crack at the title against Carla Esparza. Jedrzejczyk defeated Esparza by TKO in the second round to become the new UFC champion at 115 pounds.

It was a victory that Holm will probably remember for the rest of her life. In front of a record-breaking crowd of 56,215 people in Melbourne, Holm faced off against Ronda Rousey for the UFC women’s bantamweight championship. Rousey had defended the title in dominant fashion, taking out competitors such as Miesha Tate, Sara McMann and Cat Zingano. However, UFC 193 was Holm’s night. She handed Rousey her first loss, defeating her by knockout 59 seconds into the second round. 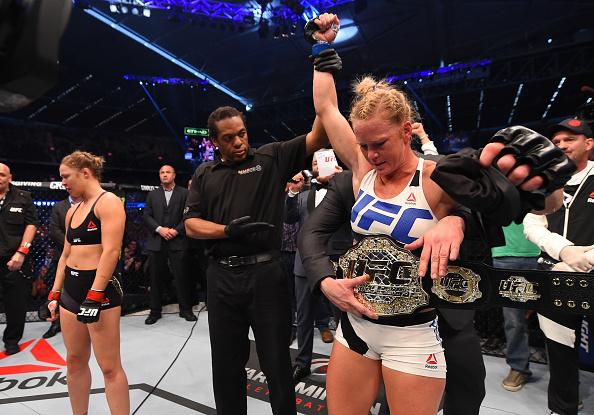 Coming into their matchup, bantamweight Dominick Cruz had not suffered a loss since 2007. That all changed when he faced Cody Garbrandt at UFC 207 for the bantamweight championship. Garbrandt held a record of 10-0 heading into the bout, securing all but one of his wins by KO/TKO. “No Love” earned the belt by a unanimous decision victory, handing Cruz his first defeat in almost a decade.

The name speaks for itself.

A legend in the UFC, Khabib Nurmagomedov retired with an undefeated record of 29-0 and was the longest-reigning UFC lightweight champion, holding the title from April 2018 to March 2021. Nurmagomedov faced Al Iaquinta for the vacant UFC lightweight title at UFC 223 and won via unanimous decision. And he didn’t stop there. Nurmagomedov went on to successfully defend the title against Conor McGregor, Dustin Poirier and Justin Gaethje. His success will be remembered for many years to come. 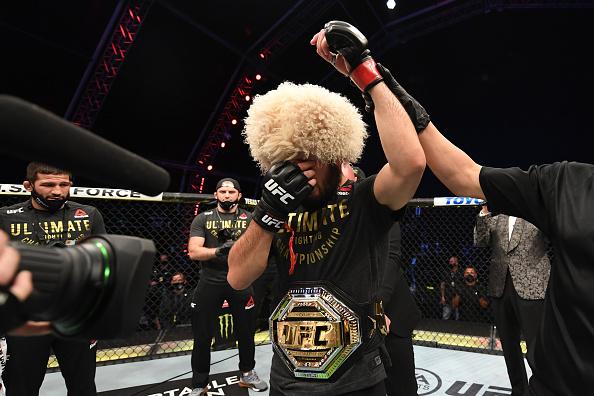 Beginning his professional career in 2012, Israel Adesanya made a splash when he entered the UFC in 2018. With notable wins over fighters such as Derek Brunson and Anderson Silva, Adesanya had a winning path that led him straight to a title shot. “The Last Stylebender” faced off against Kelvin Gastelum at UFC 236 for the interim UFC middleweight title. By earning a win over Gastelum by unanimous decision, it put Adesanya in front of Robert Whittaker where he became the undisputed middleweight champion, knocking out Whittaker in the second round. Adesanya recently defended his title against Marvin Vettori at UFC 263. 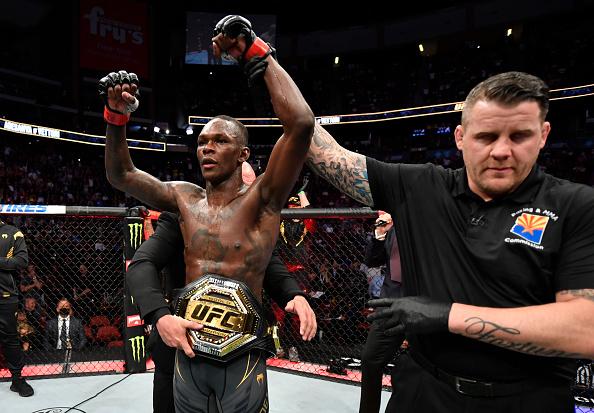 Israel Adesanya of Nigeria reacts after his victory over Marvin Vettori of Italy in their UFC middleweight championship fight during the UFC 263 event at Gila River Arena on June 12, 2021 in Glendale, Arizona. (Photo by Jeff Bottari/Zuffa LLC)

Don't miss and action-packed card and the crowning of a new interim heavyweight king this weekend at UFC 265: Lewis vs Gane, live from the Toyota Center in Houston, Texas, and available to watch on ESPN+. Early prelims begin at 6pm ET/3am PT. Main card begins at 10pm ET/7pm PT.