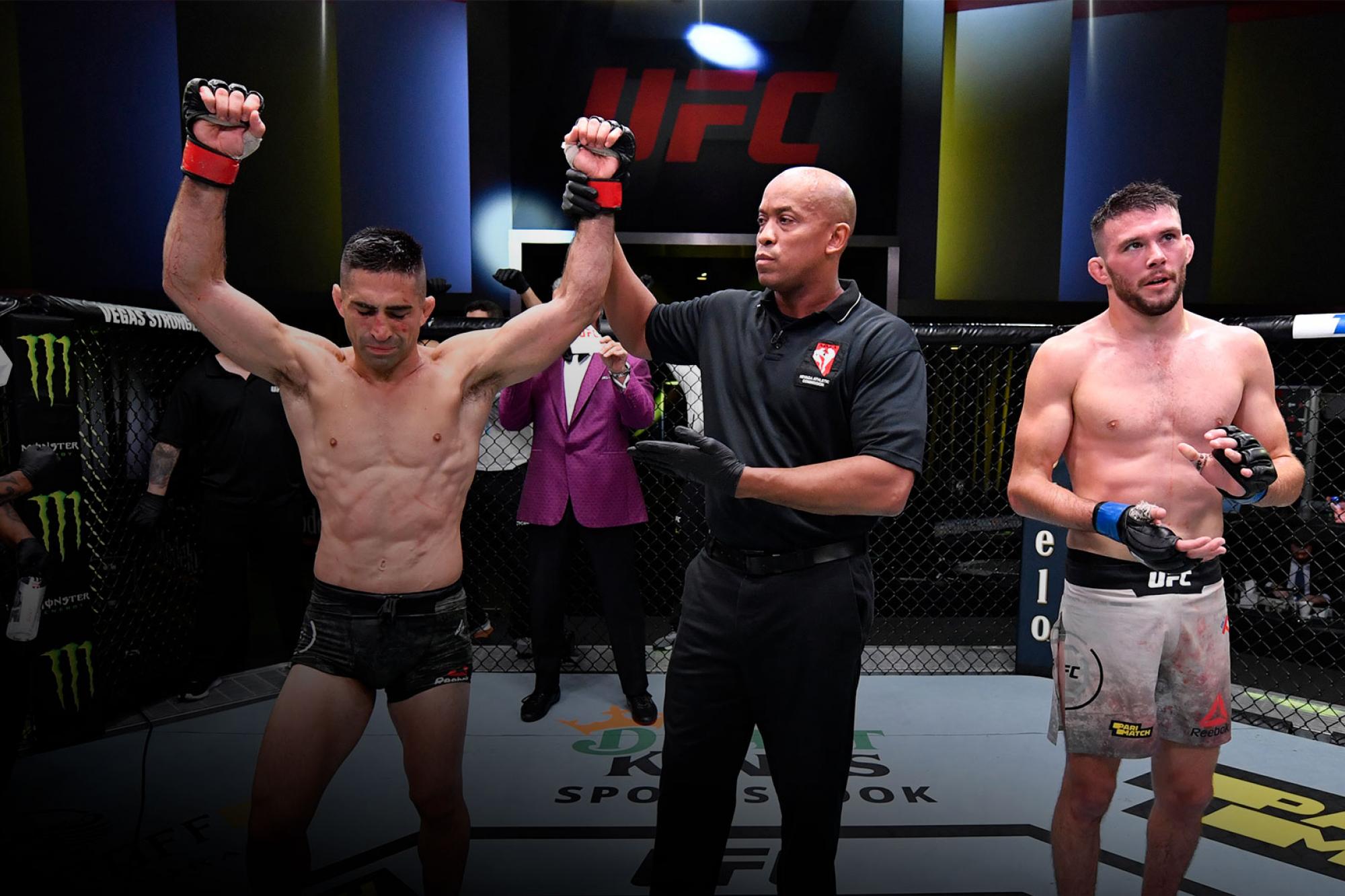 Recap the bonus winners from UFC Vegas 8
By Gavin Porter, on Twitter: @PorterUFCnews • Aug. 30, 2020
Fight of the Night
Ricardo Lamas vs Bill Algeo

Stepping in on short notice against a former title challenger is a tall task, one that Bill Algeo absolutely was up to. Algeo and Ricardo Lamas went three hard-fought rounds, but it was a gritty performance in the final frame that secured Lamas his 11th UFC victory.

Lamas and Algeo exchanged at a fever pitch for the first five minutes, with each having their moments. “The Bully” used his kicks to keep Algeo at range and to damage the UFC rookie’s body. In round two, the big moments belonged to Algeo, who hit Lamas with nice elbows in the clinch and a big knee.

Round three was all Lamas, who earned a takedown early on and never let off the gas. Lamas has made a living off ground-and-pound for a long time and Algeo experienced that firsthand for most of the round. A mixture of punches and elbows, combined with constant pressure, allowed Lamas to secure a 10-8 round from each judge.

In the end, it was 29-27 x 3 for Lamas, who mentioned that his UFC Vegas 8 fight may be the last time we ever see him in the Octagon. If it is the last time, it was one heck of a ride and a fight he can go out on with his head held high.

“I always said I don’t want to leave this sport in the dirt, I want to leave with my head held high. That’s a fight I can be proud of.” – Lamas to UFC.com post-fight.

Talk about a comeback! Strawweight Mallory Martin bounced back from Hannah Cifers’ first-round onslaught in a big way. The Elevation Fight Team product was dropped and hurt for the final portions of the round but pulled guard in an attempt to clear the cobwebs.

It’s safe to say it worked because Martin opened the second round with a quick takedown and executed her ground-and-pound, which forced Cifers to roll to her back and cover up. Martin got a hold of Cifers’ neck, locked in a deep rear naked choke and forced “Shockwave” to tap.

It was Martin’s first UFC win and showed why she was signed to the UFC through Dana White’s Contender Series.

“I did feel a little pressure to get that win and in the first round when all that happened, I was just thinking in my head like, ‘This ain’t happening to me. This is not how I’m going down,” Martin to UFC.com post-fight.

The kid from Philadelphia is still undefeated after taking care of business against Christian Aguilera at UFC Vegas 8. Sean Brady took a calculated approach in the first round, utilizing his striking and grappling to score points. Both Aguilera and Brady had moments, but Brady seemed to have the upper hand heading into the second round.

Brady didn’t waste much time getting the fight to the canvas, where he locked in a guillotine choke. Aguilera tried his best to get out of it, but Brady’s squeeze was too tight and that was all she wrote.

It was an important statement for Brady, who moved to 13-0 with the submission win. He’s 3-0 in the UFC and now has his first finish in the promotion. He seems ready for a step-up in competition in the ultra-tough welterweight division.

“If anyone doesn’t think I’m real then I’m just going to keep on proving them wrong.” – Brady told UFC.com post-fight.