Fight of the Night: Paul Felder vs. Rafael Dos Anjos 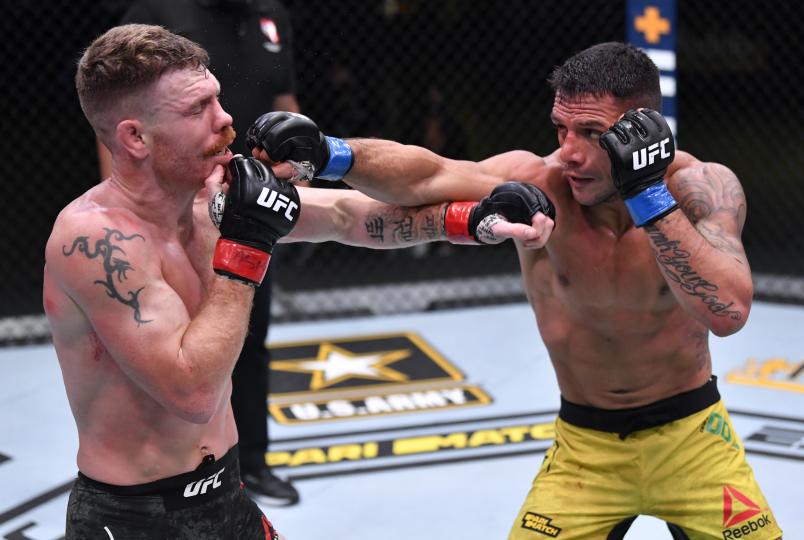 The ill-fated, twice-scratched bout between Rafael Dos Anjos and Islam Makhachev somehow ended up being a five-round treat for fight fans when Paul Felder stepped in to save the fight on just five days' notice.

Five days or not, “The Irish Dragon” looked as crisp as if he had had a full camp, unloading a bevy of his trademark strikes on the Brazilian’s head and weathering the storm that came back at him.

The story of the bout, however, was the triumphant return to the lightweight division by RDA. The fact that the final scorecards featured a split decision was more an oddity than an indication that the fight was close. In his 30th UFC appearance in twelve years, Dos Anjos looked every bit as crisp as he did in the era when he last hoisted the lightweight belt. Now poised to catapult into the Top 10, he looks to pose problems for an already-dense division.

"I was training for a southpaw wrestler and Paul Felder's an orthodox striker, a technical striker, strong guy,” he would say following the fight. “But I wanted to make this show happen. I took the fight. Hats off to Paul Felder for jumping in. I'm glad we got a great fight for the fans.”

That they certainly did.

Performance of the Night: Sean Strickland

Two fights and two wins in a mere 14 days is a sweet statistic Sean Strickland gets to add to his résumé following his TKO clobber-fest of Brendan Allen.

After two long years away from the Octagon recovering from a terrible motorcycle accident, the back-to-back wins would be triumphant enough, but in his beatdown of Allen this night, Strickland took a particular satisfaction.

“He actually beat a couple of my good buddies,” Strickland explained post-fight. “It felt really good in there. If you watch Brendan, he’s a tough guy. He’s never been broken. I remember telling my corner ‘I want to break this guy. I want to keep hitting him until I break him. I want him to not want to be here.’ And I feel like we accomplished that.

To be honest, there was a moment when even my mind started thinking ‘how does this guy keep taking these shots?’. But he just stayed in his game plan, kept fighting. Towards the end of the second round, I just stopped going backwards and I just kind of felt like he had nothing left and that was when I saw it was time to turn up and put him away.”

Performance of the Night: Khaos Williams

The term “starched” is one of those terms in combat sports journalism that has been so overused that it tends to elicit more eye-rolls than anything else. But sometimes there’s just no better way to describe what happened to a fighter. Case in point: Khaos Williams' 30 second KO of the always-dangerous  Abdul Razak Alhassan. A perfect punch to the chin, and Alhassan went flat like an ironing board.

If you’re keeping track at home, that’s two knockouts in two UFC fights, for a grand total of 57 combined seconds in the Octagon. If the welterweight division hadn’t noticed already, they’re noticing now.

“This feels amazing. This is more important than that first one for me. I came in with a splash, let the division know, let the world know I was here and this one just let everybody know it wasn’t no fluke. This is more important than my debut. That’s why I took the time to just dedicate all my time to it. I put a lot of stuff on hold, muted my life, my social life, just put everybody on the backburner and was just focused. Here we are.

"This dude had ten wins, ten knockouts in the first round. I hope he is alright. This is a sport, so I never want anybody to really get seriously hurt, but while I’m in there, it’s really kill or be killed, but outside of it, it’s all love. I hope he’s alright, but, like I said, he’s a knockout artist himself and I just knocked out a knockout artist. I let my hands speak for themselves.”