Movie star and WWE superstar Dwayne "The Rock" Johnson and UFC fighter and former WWE superstar CM Punk join Matt Serra and Jim Norton in the second episode of UFC Unfiltered. Punk talks about his transition the UFC from WWE, and The Rock discusses managing his busy movie career schedule and more. Here's what you can listen to: 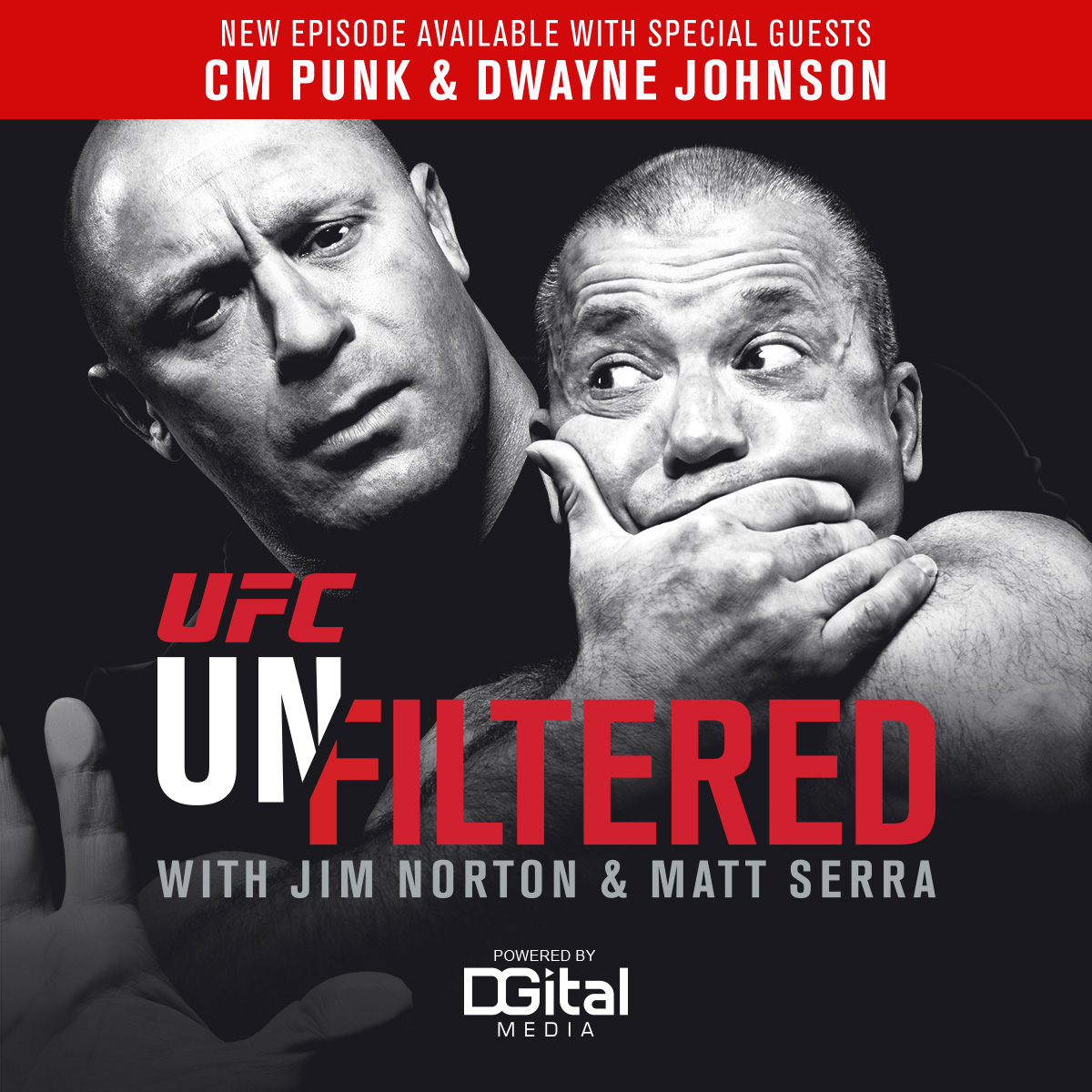 1:20 - Eating healthy after the life of a fighter

2:40 - Matt and Jim talks about the positive feedbac from the first episode

10:02 - Punk talks about how his training is going for his UFC debut

15:25 - Punk talks about the roadblocks and injuries on the way to his debut

17:15 - Punk talks about the negative reaction he's received about his transition from WWE to UFC

19:48 - Matt and Punk talk about how difficult it is to be a fighter/celebrity in the social media age

22:02 - Jim asks Punk about his approach to weight cutting for the first time in his debut

22:45 - Jim asks Punk is he ever regrets deciding to fight for a living

25:12 - Punk talks about his relationship with Chael Sonnen

25:45 - Jim asks Punks about the difference in mentality between competing in the WWE and the UFC

27:43 - Jim asks Punk when the moment was when he decided to make the move to UFC

31:28 - Punk talks about how seriously he's taking the fight game

32:00 - Jim talks about wishing he had the ability to fight instead of just having the comedic gene for talking trash

34:01 - Punk talks about his abilities on the mic as a professional wrestler

36:05 - Jim and Matt discuss another WWE wrestler getting set to come back to the Octagon: Brock Lesnar

39:15 - The Rock joins the show and Jim immedaitely asks him if he ever take s abreak from filming as he calls from the set of his next movie Fast and Furious 8

40:30 - The Rock talks about how he finds time for family with busy schedule

41:15 - Matt tells The Rock about how he just saw Central Intelligence with The Rock and Kevin Hart

44:10 - Jim asks The Rock if he pays attention to the reviews his films receive

46:20 - The Rocks tells Jim and Matt if he ever had any itch to try mixed martial arts

49:30 - The Rock talks about Brock Lesnar's return to the UFC

50:20 - The Rock talks about Mark Hunt and his admiration for the Super Samoan

51:10 - The Rock talks about whether he prefers to act in comedy or action films

51:55 - Matt asks The Rock about the intimidation factor of pairing with comedic genius Kevin Hart

54:50 - Jim talks about his memories of doing comedy shows with Kevin Hart

57:10 - The Rock talks about his training obsession that begins at 4am everyday

1:08:10 - Matt and Jim give their predictions for Fight Night: Dos Anjos vs Alvarez

1:17:51 - Matt and Jim talk about possible match ups for the winner of Dos Anjov vs Alvarez

1:20:20 - Matt and Jim talk about Conor McGregor and his bout with Nate Diaz

Check back every Tuesday and Thursday for brand new episodes of UFC Unfiltered here on UFC.com or you can download every episode of the podcast on iTunes or Google Play.