All the results from this weekend's fights
By Thomas Gerbasi, on Twitter: @TGerbasi • Oct. 17, 2020

A long anticipated feathweight bout headlines October 17th's main event at UFC Fight Island 6: Ortega vs The Korean Zombie. The #1 ranked Brian Ortega marks his return to the Octagon after 679 days to face the #4 ranked featherweight "The Korean Zombie" Chan Sung Jung. What started out as a cordial competition has turned into a bitter rivalry between the two premier fighters, with the winner possibly earning a shot at Alexander Volkanovski's title.

What time is UFC this weekend?

How to watch UFC this weekend 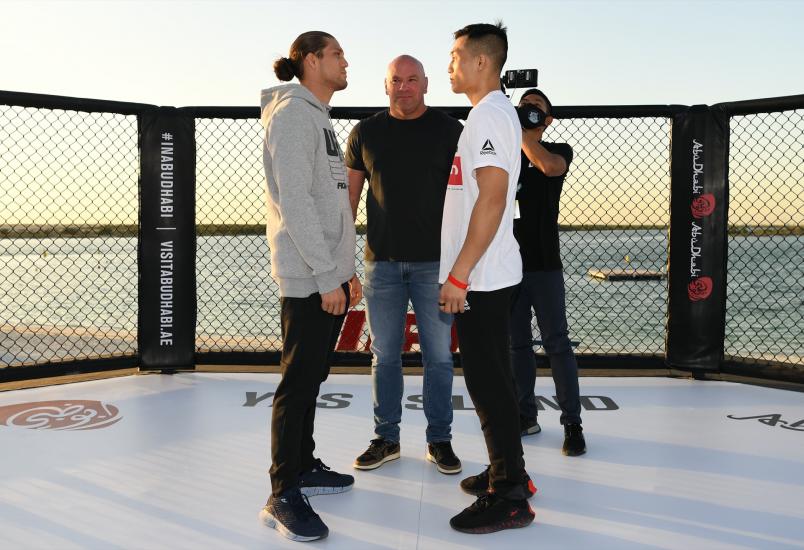 Bantamweight prospect Said Nurmagomedov spoiled the first UFC appearance of Mark Striegl, ending their bout in less than a minute.

Striegl appeared comfortable in his debut, but as he charged in, Nurmagomedov nailed him with a counter left, forcing the Filipino battler to look for a single-leg takedown. Nurmagomedov wasn’t having it, and after a series of shots to the side of the head, he finished matters with a punishing barrage of ground strikes, prompting the stoppage from referee Lukasz Boscaki 51 seconds into the bout.

Official Result: Said Nurmagomedov def. Mark Striegl by KO at :51 of Round 1

After a tactical first round with only spurts of significant action, Antigulov went after a takedown early in round two and while he got two of them, Grishin easily got back to his feet, the second time reversing position and locking his foe up against the fence. Midway through the round, the two went back to the mat, Grishin ending up in the mount position. After getting off several ground strikes, the two rose, and though Antigulov landed a hard shot, Grishin fired back, and after a series of unanswered blows, referee Anders Ohlsson halted the bout at 4:58 of the second frame.

Official Result: Maxim Grishin def. Gadzhimurad Antigulov by TKO at 4:58 of Round 2

France’s Fares Ziam got in the UFC win column for the first time in lightweight action, decisioning Australia’s Jamie Mullarkey via unanimous decision.

Mullarkey put the fight on the mat early, but Ziam was able to sweep his way into control and subsequently back to his feet, where he landed some hard kicks to his opponent’s leg. Mullarkey kept moving forward, but when he got too close in the final minute, it was Ziam getting the fight to the mat twice.

Continuing to march after Ziam, Mullarkey ate some counters but was undeterred as he went on to score a pair of takedowns with under two minutes to go. The second time, he was able to keep the Frenchman grounded for a longer spell, with the two only standing with less than 20 seconds remaining.

A minute into the final round, Mullarkey was back in the top position on the mat and he maintained that control until the two rose midway through the stanza. Mullarkey kept the pressure on until he grounded Ziam again, but Ziam was the one in control on the ground until the horn sounded.

Park avoided the fight-ending power of Phillips by securing a takedown in the opening minute, and “The Iron Turtle” went to work, getting his opponent’s back and firing off strikes, putting a one-sided round together in the process.

The second and third rounds were carbon copies of the first, Park completely dominating the action on the ground with Phillips having no answers for him.

Flyweight contender Gillian Robertson broke in her Brazilian Jiu-Jitsu black belt with a dominant ground display against Poliana Botelho, who she defeated via unanimous decision.

Botelho did a good job of holding off Robertson’s grappling attack in the first round, with the Canadian only getting the bout to the mat with 52 seconds left. Robertson was able to keep her foe grounded for the rest of the frame, and she got Botelho to the mat even quicker in the second round. It took her a bit to get into the mount position, but she did with 1:40 left and a series of ground strikes followed until the round ended.

Botelho had some success with her strikes in the opening minute of the third round, only to find herself grounded once again, and from there it was another clear-cut round for Robertson, who took the bout via scores of 29-28, 29-27, 29-27.

Two lightweights introduced themselves to the UFC in style, with Guram Kutateladze and Mateusz Gamrot battling out for three rounds, with Kutateladze emerging victorious via split decision.

Gamrot put the fight on the mat in the opening minute, with Kutateladze looking for a submission from the back until Gamrot tried the same strategy, the two then getting back to their feet. The pace stayed high for the rest of the round, Kutateladze making an impression with several hard kicks.

The fast-paced action continued in the second round, Kutateladze working his standup game effectively for much of the round while Gamrot kept it close in the grappling sequences. And in the third, the Poland native surged, but when the scorecards were read, Kutateladze had the win and Gamrot had his first pro loss.

Martinez did a good job of keeping Almeida from getting into a rhythm in the opening stanza, staying busy with kicks to the leg and punches upstairs. Almeida eventually got warmed up, but Martinez closed strong to secure the round.

Almeida began finding his range in the second and he scored well, but he wasn’t affecting Martinez, who stayed the busier of the two, tagging his foe with quick shots while sprinkling in the occasional power shot.

The left hand of Martinez landed flush twice in the first half of the third round, rocking Almeida, but the Brazilian roared back with a solid 1-2 that kept Martinez honest, and the two continued to battle on even terms until the end of the fight.

Krause’s right hand was like a laser in the first half of the opening round, but Silva had the equalizer when he got close enough to grapple with his opponent. Silva had some success, but with two minutes left, the American got loose and landed more hard right hands before the round ended.

Silva (14-2) kept throwing in the second round, but he wasn’t landing anything significant and his takedowns were being stuffed by Krause (28-9), who was still landing plenty of right hands, even though he told his corner before the round that his knee was injured.

Unable to get the fight to the mat, Silva dug deep and looked to win the fight on his feet, yet while he was busier, the crisper, more accurate shots came from the fists of Krause, who emerged victorious via three scores of 30-27.

Crute focused on chopping at Bukauskas’ legs early on, but it was when he moved upstairs with his right hand that it spelled the end, as a right hand dropped Bukauskas. The Lithuanian rose but got clipped with another right before a left hook put him on the canvas again, with referee Anders Ohlsson stopping the bout at 2:01 of the first round.

Official Result: Jimmy Crute def. Modestas Bukauskas by KO at 2:01 of Round 1

Andrade had no problem closing the distance on her taller foe, taking Chookagian down in the opening minute. Chookagian fought well off her back before getting back to her feet but wound up pinned to the fence for a spell. Moments later, an Andrade leg kick scored a knockdown, and once her opponent was up, she continued trying to bully the former title challenger. Chookagian wasn’t backing down, though, and she landed some good shots from long range. With 45 seconds left, Andrade slammed Chookagian to the mat and got in some strikes before Chookagian rose, but a pair of body punches put the Pennsylvania native down and brought in referee Lukasz Bosacki to stop the fight at the 4:55 mark of round one.

Official Result: Jessica Andrade def. Katlyn Chookagian by TKO at 4:55 of Round 1

Sidelined since a December 2018 loss to Max Holloway, featherweight star Brian Ortega returned in top form as he scored a shutout five-round unanimous decision over “The Korean Zombie,” Chan Sung Jung, in the UFC Fight Night main event on Fight Island in Abu Dhabi, earning a shot at the man who beat Holloway for the 145-pound belt, Alexander Volkanovski.

Jung got off to a slow start, as Ortega calmly picked at him with his strikes. Jung still got in enough leg kicks to bruise up his foe’s legs, but whenever he opened up, it was Ortega tagging him in response. With a little over a minute left, Ortega landed a quick left that dropped Jung, and while the Zombie rose just as fast, it was the biggest shot of the round.

Ortega’s first takedown attempt came in the second minute of round two, but Jung defended well. The two went on to battle on even terms until less than a minute to go, when Ortega scored another knockdown, this time with a spinning right elbow. Remarkably, Jung got back up and traded with Ortega until “T-City” scored a late takedown that cemented the round for him.Ortega mixed his attacks up nicely in the third, showing few, if any, signs of ring rust after the long layoff, and while Jung was still in the fight, he wasn’t being busy enough to stop his opponent’s momentum.

A right hand by Ortega in the midst of a takedown attempt cut Jung in the fourth round, and things didn’t get much better for the Zombie, who still couldn’t find his way back in the fight. And in the fifth, the gutsy Jung kept pressing in an attempt to score the come from behind win, but Ortega remained a step ahead, showing that he was truly back in the 145-pound title picture.