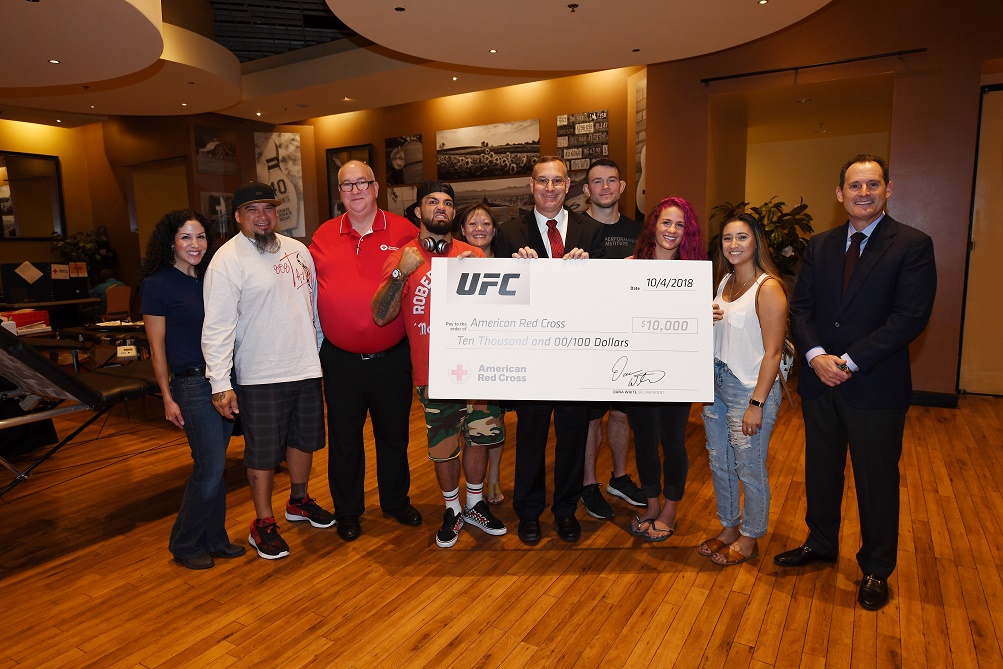 This week the UFC spent time with various organizations in the Las Vegas area in an effort to improve the community, as well as honor the victims of the October 1st, 2017 tragedy.
On Tuesday afternoon the UFC partnered with the American Red Cross of Southern Nevada to host a blood drive at the Orleans Hotel and Casino in remembrance of the October 1 tragedy with the goal secure at least 58 blood donations, one representing each victim, which the Red Cross will use to potentially save 175 lives.

UFC also presented the Red Cross with a check for $10,000 to assist with the organization’s 10-day community blood drive throughout the Las Vegas Valley.

UFC Senior Vice President and Chief Operating Officer Lawrence Epstein made it clear that the UFC still stands by families that were affected by the events of October 1st.

“The terrible tragedy of October 1, 2017, still weighs heavily on all of us here at UFC,” Epstein said. “Over the past year, we have worked with the Vegas Strong Fund to assist the victims and their families and friends, and we will continue to do our part to help the Las Vegas community heal.”

Red Cross Regional Philanthropy Officer James Ludwig, made it clear that every donation is important and could save lives.

“I just can’t thank the UFC enough for partnering with us on this. It is very important for individuals to come out and donate blood,” Ludwig said. “We always need blood. Every donation helps save lives.”

“It’s so amazing to be a part of these kids day,” UFC women’s bantamweight Gina Mazany said. “Bringing that positivity and making them smile is great. I’m proud to be here and thankful that the UFC makes it a priority to give back to people that are in need.”

No. 12 ranked middleweight Uriah Hall echoed Mazany’s sentiments and was excited to make a difference in the lives of these incredible kids.

“I think it’s an amazing experience to come play with these awesome children. The kids here are so beautiful and it’s such a nice, positive environment,” Hall said. “For me to be able to come here and tell them they can be whatever they want to be and they are a fighter just like me, even though they aren’t in the Octagon.”

Friday evening, the UFC hosted four individuals represented by the Make A Wish Foundation of Southern Nevada. After traveling from Kentucky, Scotland, Ireland and the Netherlands, all four were present at the UFC 229 weigh-ins. Following the weigh-ins, UFC welterweight champion Tyron Woodley and UFC President Dana White spent time meeting these each of these massive fans.

The UFC also presented gloves autographed by lightweight champion Khabib Nurmagomedov and former double champ Conor McGregor to each of the Make A Wish recipients. The entire experience was a profound moment that put huge smiles on every face in the room. All Make A Wish recipients will be present for today’s UFC 229 at T-Mobile Arena.

In addition UFC Fans coming out for today’s UFC Fan Experience in Toshiba Plaza from 12-4 and tonight’s UFC 229 card will have a chance to win 50% of the jackpot for UFC 50 / 50 raffle! All net proceeds will benefit Make-A-Wish of Southern Nevada, which created life-changing wishes for children battling critical illness.