Las Vegas – UFC® today announced that the 9th Annual UFC International Fight WeekTM will take place in Las Vegas from Tuesday, July 7, through Sunday, July 12. The week-long series of events will be headlined by UFC® 252, presented by Modelo, the 2020 UFC Hall of Fame Induction Ceremony and a two-day, interactive UFC Fan Experience®. 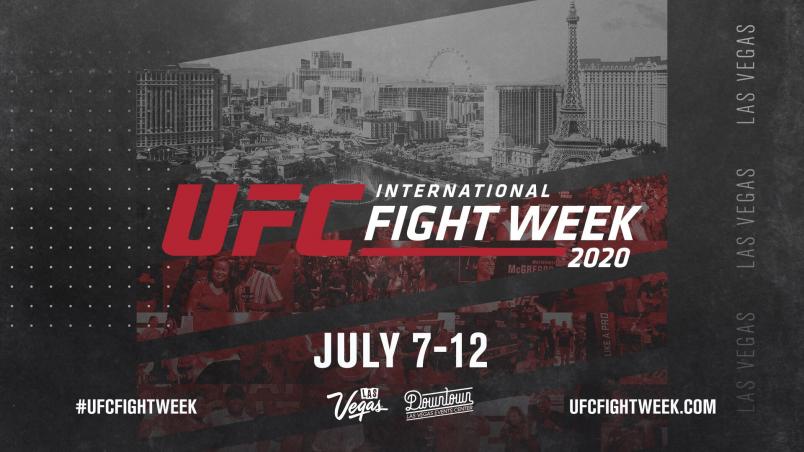 Among the highlights, the prestigious 2020 UFC Hall of Fame Induction Ceremony, presented by Toyo Tires® will be held on Thursday, July 9, at The Pearl at Palms Casino Resort. The event will honor specific achievements and contributions to UFC and the sport of Mixed Martial Arts, as well as recognize the global brand’s inaugural Forrest Griffin Community Award recipient.

On Friday, July 10, and continuing on Saturday, July 11, fans will be able to take part in a fully interactive and easily accessible free, two-day UFC Fan Experience at the Downtown Las Vegas Events Center. The two-day experience will feature meet and greets, autograph sessions, and partner activations that provide unparalleled access to UFC champions, Hall of Famers, top-ranked contenders, and other UFC personalities.

In addition, fans from around the world who converge on Las Vegas for UFC International Fight Week will be able to enjoy the open workouts, weigh-ins, press conferences and live entertainment of a traditional Fight Week leading to the schedule’s culminating event, UFC® 252, on Saturday, July 11, at T-Mobile Arena.

Details regarding UFC Hall of Fame inductees, the bout card for UFC 252, and additional events for UFC International Fight Week will be announced at a later date. For more information, visit UFCFIGHTWEEK.com.

About UFC®
UFC® is the world’s premier mixed martial arts organization (MMA), with more than 318 million fans and 80 million social media followers. The organization produces more than 40 live events annually in some of the most prestigious arenas around the world, while broadcasting to nearly one billion TV households across

About The Pearl at Palms Casino Resort

The Pearl is Las Vegas’ premier concert theater boasting accommodations for up to 2,500 ticket holders. The newly renovated, award-winning venue features a stage just four feet from the floor with the farthest seat a mere 120 feet back, offering the utmost in intimate concert viewing. Private and semi-private skyboxes are located on each side of the venue offering private bars, lounges, and restrooms. The Pearl is a marvel of modern technology boasting top-of-the-line sound and video equipment throughout. Hard wired to Studio at the Palms, The Pearl allows artists to create a cost-effective live album with efficiency. For more information, please visit www.palms.com.

Located at the corner of Third St. and Carson Ave. across from the D Las Vegas, the Downtown Las Vegas Events Center (DLVEC) can accommodate up to 11,000 guests and features state-of-the-art stage, sound and lighting. The open-air design is inviting to both tourists and locals and offers the perfect spot for concerts, conventions and other large-scale events. Embracing the uninhibited spirit of Downtown Las Vegas, the venue plays host to a line-up of curated events including premier concerts, food festivals, boxing matches and more. For more information, visit www.dlvec.com or follow on Facebook, Instagram and Twitter at @DLVEC.