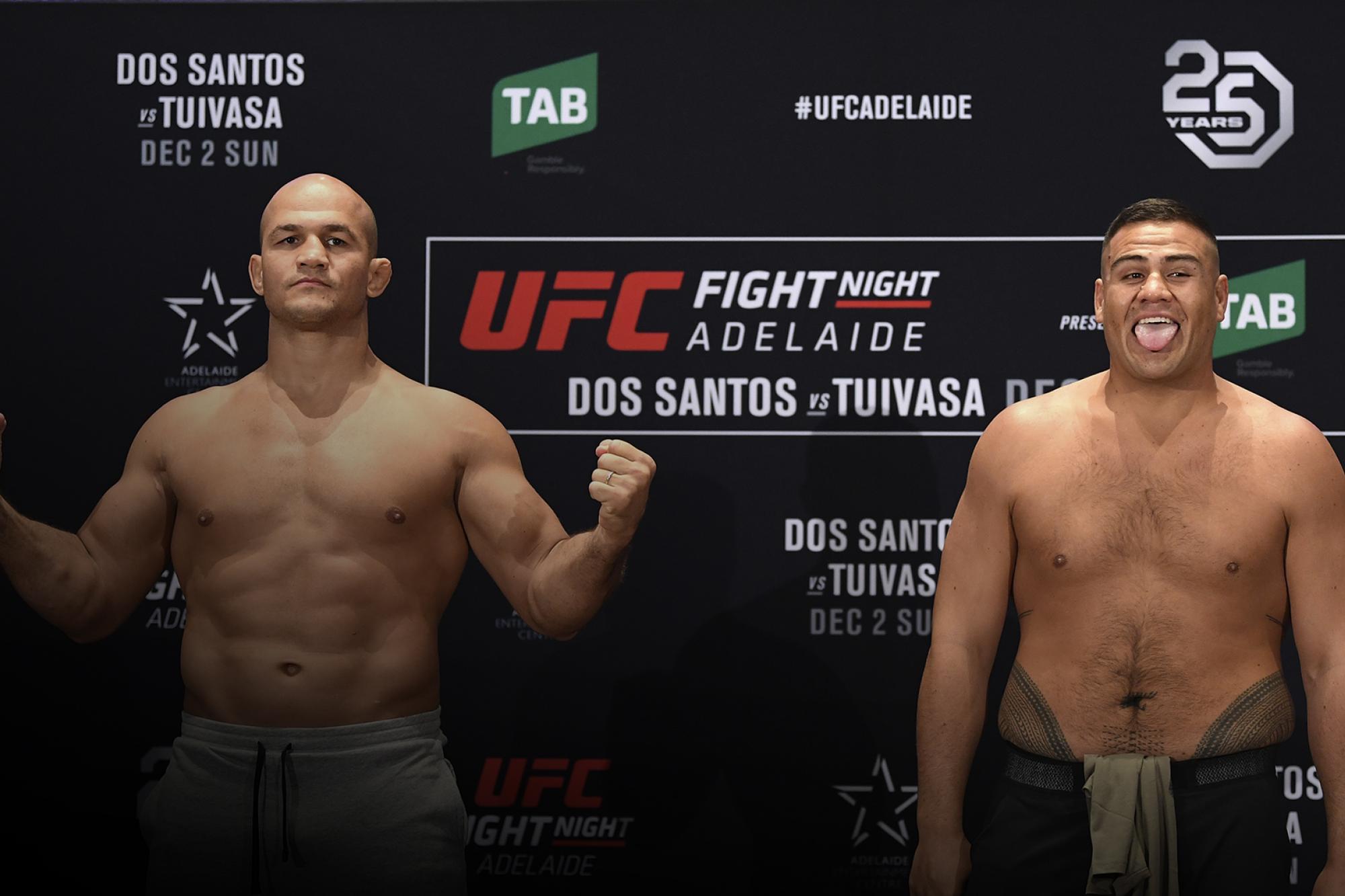 Recap All The Action From Down Under, Fight By Fight.
By Богдан Доманский • Dec. 1, 2018

Who were the winners at Fight Night Adelaide: Dos Santos vs Tuivasa? We have all your results from Adelaide Entertainment Centre in South Australia.

They talked about it all week. They wanted to stand and bang. So stand and bang they did. Tuivasa landed the first two big shots, one coming on the break out of the clinch. Tuivasa is walked Dos Santos down the entire round, pressuring him against the fence. The leg kicks of Tuivasa played a huge role as well, as Bam Bam attacked Dos Santos' lower left leg. By the end of the first Cigano was moving very slow. Great work from Tuivasa in the clinch as well, really strong round for the challenger.

Tuivasa started the second round with a huge left hook that sent Dos Santos back to the fence. Tuivasa wasn't done yet, hitting Dos Santos with another big hook. But then Dos Santos responded in a big way absolutely rocking Tuivasa, sending him rolling on the ground. It was a big right cross that wobbled Tuivasa, made him come forward, followed by two perfectly timed hooks. From there Dos Santos moved into a full mount and layed down some serious ground and pound that finished the fight. Wow. How fun was that?

Young gun vs a legend, this scenario feels similar right? The first minute of Tyson Pedro vs. Shogun was the feeling out process for an all out brawl for the remainder of the round. Pedro landed shots that nearly ended the fight. It was two big knees to the head followed by a multiple uppercuts that had Shogun retreating and holding on for dear life. But then Shogun struck next, landing huge blows of his own that opened Pedro up above the eye. In round two the two continued to throw hands but the fight moved to the ground, with Shogun in dominant position exercising some ground and pound. Shogun didn't do much damage but he did control Pedro for what felt like the entire round. Very close heading into the final round.

It didn't take long for Shogun to end the debate on who was winning the fight. The legend landed a massive straight right that put Pedro on his butt and trapped him against the Octagon. From there Shogun poured on the punishment, and as Pedro was flailing in an attempt to protect himself, the ref had seen enough. What a bounce back win for Shogun.

Mark Hunt made his final trip into the Octagon against Justin Willis and he did it to the spirit of the Haka dance. What a moment for the legend. To quote Joe Rogan, the crowd was deafening!

On one of Hunt's first kicks, a gash opened on the shine of the Super Samoan. But that didn't stop him from throwing power kicks to the body, thigh and lower leg of Willis. Big Pretty was doing some work of his own, being very patient and effective with his boxing. Willis was more than happy to use his jab to pepper Hunt rather than stand and throw power shots.

By the start of the third round, a decent sized mouse was starting to appear under the left eye of Hunt. Willis has been putting in work with with his right hand, tagging Hunt over and over again. Hunt never stopped walking forward but Willis constantly backed-up and rotated around the Octagon, all while hitting the legend with that jab.

Social Post
Jake Matthews vs Anthony Rocco Martin
Official Result: Martin def Matthews by submission due to at 2:30 in Round 3.

In some fights there are moments that make then entire crowd lose their minds and in the first round of Jake Matthews vs Tony Rocco Martin, the two welterweights nearly caused an earthquake in Adelaide. Talking back and forth the two fighters decided to abandon all technique and swing for the absolute fences. Matthews won the exchange with a big hook that put Martin on his butt. In the next round Matthews' striking showcase continued, landing some nice punches as Martin pressed forward and bringing power with each shot.

Martin didn't show any sign of stopping however, constantly pressuring Matthews to the outside of the Octagon. Martin was having success with his hands as well, also mixing in a variety of kicks. Then seemingly out of no where, it was a kick to the leg combined that sent Matthews to the ground. Martin jumped in and secured a  to finish the fight. Wow, probably fight of the night up to this point.

So the first six fights of the evening ended in a decision and then Jimmy Crute kicked off the main card with very late submission victory. So naturally, when Suman Mokhtarian and Sodiq Yusuff heard that Octagon door close it was an explosive fast paced fight that ended in just over two minutes.

Yusuff's power, speed and aggressiveness overwhelmed Mokhtarian quickly landing combo after combo. Once Mokhtarian stumbled back to the fence, Yusuff went in for the finish throwing twelve unanswered punches before the referee was forced to stop the fight.

Social Post
Jimmy Crute vs Paul Craig
Official Result: Crute def Craig by submission due to a Kimura 4:51 in Round 3.

Kicking off the main card was Australia's own Jim Crute and Scotland's Paul Craig. In the first round both Crute and Craig had their moments, with Craig landing a great kick to the face of Crute (which didn't seem to even faze the Aussie) and Crute nearly submitting Craig. In the second Craig manage to takedown Crute twice, but he was unable to do any damage to Crute. Craig's wrestling played a big factor, considering Crute wanted to stand and throw hands.

Crute's ability to turn the tables on Craig once the two hit canvas was impressive. On multiple occasions Craig would look like he was going to secure a takedown but Crute would come out of the scramble in the dominant position. With less than 4 minutes left in the fight Crute was able to make his way into full-mount and grind Craig out nearly the entire round. With about 10 seconds to go Crute locked in a kimura that Craig wouldn't be able to escape. What a debut at home for Crute!

The story in this one was the defense and pressure of Kunchenko. The 19-0 fighter was hunting Okami down and every time that Okami would shoot for a takedown Kunchenko would sprawl away from danger. Kunchenko's variety of kicks also played a big factor. By the end of the second round Okami's legs were visibly red and it was clear he was walking gingerly back to his corner. Kunchenko's patience paid off at the beginning of the last round, hitting Okami with a power right that forced Okami to a knee. From there Kunchenko landed three nice head kicks and some violent kicks to the thighs of Okami. Kunchenko never let off the gas, hunting for a finish all the way down to the final bell. Dominant again, welcome to the 20-0 club Mr. Kunchenko.

Flyweights Wilson Reis and Ben Nguyen were up next. Both fighters showed their great cardio and movement through all three rounds. Reis utilized his strength and wrestling skills to get to Nguyen to the ground multiple times, but Nguyen always managed to get back to his feet. Nguyen was able to find some luck in the striking game but the aggressiveness of Reis prevented him from really landing any damaging punches. Good pace in this one, very technical and fun to watch these two in a chess match. Big win for Reis and his team.

Nakamura and Touahri spent most of the first round getting down the timing and movement of their opponent, with no fighter in particular taking control. In the second, it was Nakamura that struck first connecting with a xxxx tat momentarily dropped Touahri but it wasn't enough to finish the welterweight from Poland. Touahri started to find some success toward the end of the round however, landing a couple good left hooks and shots to the body. Nakamura's constant pressure had Touahri retreating around the Octagon for most of the fight and while no fighter took complete control over the fight, but the judges decided that Nakamura did more to get the win.

These two flyweights started out fast, with Garcia nearly getting a takedown in the opening seconds but Kara-France was able to escape his way out of Garcia's grasp and end up in control. Once the two found their way back to their feet the real fun started. Garcia clipped Kara-France with a left and dropped him to the canvas and as he stood back up Garcia hit him with a head kick but it wasn't enough to take Kara-France out. Then Kara-France came out firing as Garcia pressed him, landing a couple good shots of his own eventually getting Garcia to the ground. From there Kara-France unleashed relentless ground and pound. Connecting with huge straight punches that had Garcia covering up just as the first round ended. Round of the night so far.

Both fighters found their targets early and often to start the second but Kara-France was doing the most damage. After a brief battle for position on the canvas and an impressive submission escape from Kara-France, Garcia found himself upside down against the cage absorbing huge punch after huge punch. The fight was nearly stopped on multiple occasions but Garcia somehow survived to the final round.

The first fireworks of the third came when Kara-France landed a nice uppercut-hook combo that appeared to wobble Garcia. Kara-France continued his striking showcase but knocking Garcia down with a massive uppercut. After more violent ground and pound from Kara-France the fight finally came to an end. What a dominant win from Kara-France.

Just over a minute into the fight Giagos caught Hirota with a big right that dropped Hirota to his knees for a moment. Giagos tried to capitalize quickly with a flying knee and some big combinations as Hirota scrambled to recover.From there it was the wrestling of Giagos that took over. Giagos secured multiple takedowns, one of which came by lifting Hirota clear off the ground and putting him back down to the canvas. In the final 20 seconds of round two Giagos looked gassed, absorbing a couple good knees from Hirota. Heading into the final frame, Giagos had two rounds in his pocket but looked very tired.

Hirota was able to start the last round off with his own takedown, but Giagos quickly reversed the position and gained control. The rest of the fight Giagos continued to display his qualities as a wrestler, dominating Hirota for nearly the entire round. In the final 30 seconds of the fight Hirota was able to get Giagos to the ground and move into full-mount, nearly taking Giagos back as well. Unfortunately for Hirota the clock ran out and Giagos was given the decision.

It didn't take very long for UFC newcomer Damir Ismagulov to make a first impression. In the card's opening fight Ismagulov dominated Gorgees. The fighter out of Russia landed some big shots, including a nice knee to Gorgees' temple from the clinch. But it was the smothering, ground and pound that really took the wind out of Gorgees' sails in the first two rounds. Ismagulov secured take down after take down, tossing Gorgees around like a rag doll.

The third round started off with a bang as Ismagulov connected with a spinning kick to the body, followed it up with a Anthony Pettis type cage kick and then a spinning backfist. It was the most entertaining ten seconds of the fight and prompted the two fighters to start talking a little trash to one another. But in the end, it was the dominant grappling and wrestling by Ismagulov that earned him the victory.