UFC 191: Flyweights focus on future, heavyweights reflect on the past 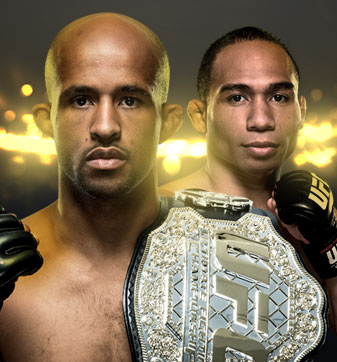 Thursday’s UFC 191 media conference call had a very “Old School vs. New School” feel to it, as the four competitors that make up next weekend’s main and co-main event fights pressed pause on their final preparations to discuss their upcoming bouts.

Representing the “Old School” were co-main event participants Andrei Arlovski and Frank Mir – two former champions that have turned back the hands of time to return to title contention in 2015.

First expected to face each other nearly a decade ago, the veteran heavyweights are in the midst of equally unexpected and impressive revivals at the moment. During the call, the two spoke glowingly about each other, reflecting on their lengthy careers and the long, winding road that will lead them into the Octagon against one another at UFC 191.

“First of all, it’s going to be an honor to fight Frank,” Arlovski said before heading into his showdown with Mir on a three-fight winning streak, the most recent of which came in an electrifying back-and-forth battle against Travis Browne at UFC 187. “I’m happy for him. Frank and I are old school fighters – he’s climbing back to the top right now, I’m No. 4 – and I’m very excited about this fight. I’m sure it’s going to be a good fight for all MMA fans and it’s an honor to fight Frank in the co-main event of UFC 191 in Vegas.

“I think Andrei poses a huge threat,” Mir, who has posted back-to-back first-round knockout victories after returning to the Octagon following a one-year hiatus, offered. “Offensively, he’s one of the best fighters in the UFC. His speed, his footwork, his movement, how hard he hits, and people forget sometimes that the guy is also an extremely technical grappler.

“We’re both guys that were champions – we were at the top of the sport, we worked our way up there – and then we both had it where people counted us out,” continued the 36-year-old Mir, who won the UFC heavyweight title at UFC 48 before an horrific motorcycle accident momentarily halted his career, opening the door for Arlovski to claim the interim title eight months later at UFC 51. “Now here we are, back in the mix of things – Andrei is knocking on the door of a title fight, he’s ranked fourth in the world, I’m back in the Top 10 and the retirement talks have been silenced.

“I think both of us represent that as long as you’re diligent and you train hard and you have heart behind what you’re doing, success will come. You just have to keep marching forward regardless of what those around you are saying.”

Meanwhile, the flyweight combatants representing the “New School” resided at the other end of the spectrum during the 40-minute call. While Mir and Arlvoski spoke highly of one another and reflected on the peaks and valleys of their respective careers, Johnson and Dodson are still very much in the prime of their careers and are less reflective than their heavyweight contemporaries.

Rather than offer praise for his rival and reflect on the path that carried him to the top of the flyweight division, Johnson remained focused on continuing his reign and achieving some of the goals he has set out for himself, while the usually hyper, verbose challenger was more reserved and concerned mostly with what he needs to do in order to earn a different result in this second meeting with “Mighty Mouse.”

“I had the missed opportunity of knocking his head off,” Dodson answered when asked what went wrong in the duo’s initial meeting in January 2013. “I messed up and there were a few shots I missed on when I dropped him. I should have capitalized on it.

“Everyone saw me with the vicious intent and killer instinct when I knocked out TJ Dillashaw, Darrell Montague and everyone else, but I didn’t show that same kind of intensity or that level of killer instinct against Demetrious Johnson. I showed him way too much respect in that fight, and with this one coming up, I’m going to make sure that I see Demetrious just as another fighter and not as the champion.”

“I’m not focused on getting the fans rallied behind me,” offered Johnson, who has been criticized for a perceived lack of personality and inability to connect with fans, including by Dodson. “If you want to see great mixed martial arts, tune in when I fight. If you want to see drama and all that stuff, watch Bachelor in Paradise; you’ll get all the drama you want.

“When I got into this sport, it was a hobby for me and, right now, I’m going for my seventh title defense,” added Johnson, who has earned five victories and four stoppages since his first encounter with Dodson two-plus years ago and has nearly cleaned out the flyweight division. “The record is held by Anderson Silva at 10, so if I could break that, that would be an awesome thing. (I’d also like to have) the most finishes as a flyweight with knockouts and submissions – that’s another goal – and just being the most active flyweight. Those are all goals that I have set for myself.

“Right now, I’m just focused on John Dodson. Once the time comes that I’ve broken the record (for most consecutive title defenses) and the goals (that I’ve set for myself), then I’ll think about (fighting at bantamweight).”